Teyana Taylor Was Hospitalized For Exhaustion Before Recent Concert 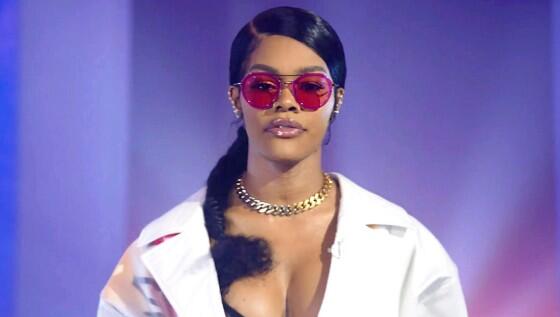 Teyana Taylor was set to perform at the Femme It Forward concert in Connecticut last night before she was forced to cancel after her “body gave out” and she was rushed to the emergency room for exhaustion.

The “Wake Up Love” took to Instagram early this morning to share the news, posting an image of herself from a hospital bed with the caption, “Thank you, thank you, thank you so much for all the warm love, sweet videos & prayers from my CT rose petals…. I love y’all! Thank you for being so understanding. Y’all know Petunia don’t miss no shows & most importantly, know I’ve been leaving it all on tha stage for a month straight 1000%. So I am really saddened to have not been able to do the same for you last night.”

She continued, “My team & I tried everything down to the very last second to get me out on that stage, but my body simply just gave out, which actually started a few days ago. SHUT DOWN, my body actually low key betrayed me cause ah b**** was tryna get on that stage ”

She then informed fans that she will be taking the next few days off to recover, before shouting out Ari Lennox, Sevyn and baby Junie for holding it down in her absence. “Shoutout to my lovelies @arilennox & @sevyn for holdin it downnnnn!” she wrote. “As well as Heather Lowery and the entire @femmeitforward team for their extreme understanding & support. Shout to @babyjunie4 for holding it down for mommy, ”

But this isn’t the first time the 30-year-old has opened up about a health scare. Earlier this year, the We Got Love star revealed that she underwent emergency surgery to remove lumps from her breasts during an episode of her and Iman’s reality show. Although the tissue sample revealed that everything was normal, it was still a scary situation for Teyana and her family.

Thankfully Teyaya is resting up and recovering well!

Teyana Taylor took to Instagram to show off her adorable daughters, Junie and Rue Rose, and it's clear that they get it from their mama!
FAMILY RELATIONSHIPS・14 DAYS AGO
hotnewhiphop.com

Azealia Banks is speaking her mind, once again. As fans of the Harlem-born star already know, she's never been one to hold back on giving her opinion – no matter how controversial – on everything from other celebrities to major world events. Most recently, the "212" singer publicly...
CELEBRITIES・9 DAYS AGO
HelloBeautiful

Yung Miami reignited relationship rumors with Diddy after she shared a photo of the two of them celebrating New Year's Eve together in Miami.
BEAUTY & FASHION・21 DAYS AGO
HelloBeautiful

Rapper Asian Doll is being praised after keeping her cool during a podcast taping gone wrong. Fresh & Fit host Myron Gaines got aggressive with the female guests before she called him "mean "and walked off.
CELEBRITIES・19 DAYS AGO

Actress and budding entrepreneur Jordyn Woods took to Instagram this week where she shared a sweet photo of all of the beautiful women in her family.
CELEBRITIES・13 DAYS AGO
HelloBeautiful

Phaedra Parks took to Instagram to strut her stuff in an all-black Chanel look and we're swooning over the fashionable ensemble!
BEAUTY & FASHION・13 DAYS AGO
HelloBeautiful

"NO MATTER if you are straight, curly or protective - as long as you are SHOWING UP as YOU Your authenticity will always shine through," Lyons wrote in an Instagram post.
HAIR CARE・19 DAYS AGO

Blue Ivy is all grown up in this never-before seen photo with Mama Tina.
CELEBRITIES・16 DAYS AGO
MarketRealist

Who Will Inherit André Leon Talley’s Net Worth?

André Leon Talley, known as the longtime creative director and editor at Vogue, has died at age 73. His net worth is somewhat of a mystery due to conflicting sources, but it's likely well below the $1 million mark thanks to his recent legal troubles. He spent years working alongside Vogue Editor-in-Chief Anna Wintour.
BEAUTY & FASHION・4 DAYS AGO
shefinds

Ben Affleck and Jennifer Lopez are the couple we never knew we needed this year! Although they are 2021 couple goals and appear to be living their best lives right now, things weren’t always so peachy with the former exes who initially dated between 2000 and 2004! If you always wanted to know more details about their widely-publicized split and why they called off their engagement just days before their wedding in 2004 then you’re in luck, as the 49-year-old The Last Duel actor just revealed the real reason for them going their separate ways 17 years ago!
CELEBRITIES・27 DAYS AGO
HelloBeautiful

Congratulations to Mimi Faust and Ty Young as the couple reportedly got engaged again last night after rekindling their love late last year.
CELEBRITIES・14 DAYS AGO

Kim Kardashian and Pete Davidson are some of Hollywood’s most famous couples. Everyone knows how Kanye West feels, but nobody seems to be asking how Davidson’s family is dealing with this media circus. One report says Amy Davidson, Pete’s mother, detests Kardashian already. Gossip Cop investigates.
CELEBRITIES・3 DAYS AGO
The Week

Rock star Meat Loaf reportedly died at 74 after contracting the coronavirus and becoming seriously ill. The singer, known for hit albums like Bat Out of Hell and appearances in films like Fight Club and The Rocky Horror Picture Show, died Thursday night, his agent confirmed. On Friday, TMZ reported that earlier this week, Meat Loaf was scheduled to attend a business dinner for a show he was working on, but he had to cancel because he "became seriously ill with COVID." His condition "quickly became critical," the outlet said.
PUBLIC HEALTH・2 DAYS AGO
HelloBeautiful

Missy Elliot Pens A Heartfelt Instagram Message In Honor Of Aaliyah’s Birthday: ‘Your Spirit Lives On’

Missy Elliot took to Instagram to share a touching message in honor of Aaliyah on what would have been the late singer's 43rd birthday.
CELEBRITIES・7 DAYS AGO
Popculture

Good Morning America is down another anchor in the studio this week as the omicron variant of COVID-19 spreads rapidly throughout the country. Anchor Robin Roberts shared that she had tested positive for the virus just hours after co-star Amy Robach announced her own positive test. Roberts, who didn't appear in the studio this week, took to Twitter to share the latest on her health.
TV & VIDEOS・2 DAYS AGO

Nia Long took to Instagram to show off her flawless skin in a fresh-faced selfie and she's absolutely glowing!
BEAUTY & FASHION・19 DAYS AGO
HelloBeautiful

2022 is off to a rocky start with the announcement of Lisa Bonet and Jason Momoa's separation. Here are other celebrity couples who didn't make it past the new year.
CELEBRITIES・10 DAYS AGO
HelloBeautiful

Regina King has released a statement on her 26-year-old son Ian Alexander Jr.'s death, telling the media that her family is "devastated."
CELEBRITIES・1 DAY AGO
Radar Online.com

Regina King’s son, who reportedly took his own life earlier this week, said he was “losing his s--t” in his final posts to social media before his tragic passing. According to Ian Alexander Jr.’s Twitter, the aspiring DJ claimed he was “losing his s--t” and felt like his brain was on fire just prior to allegedly taking his own life Wednesday.
CELEBRITIES・11 HOURS AGO