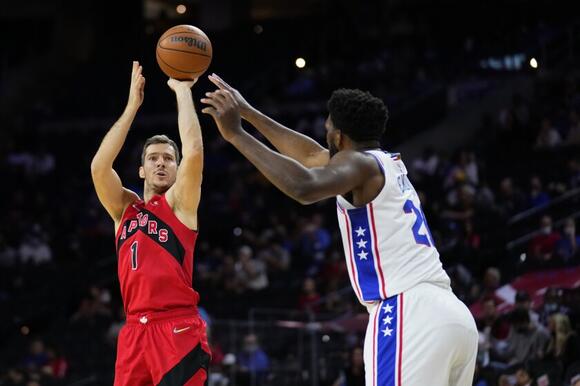 Goran Dragic has left the Toronto Raptors because of a personal matter.

The Raptors said Sunday before their game against Boston Celtics that the 35-year-old guard — acquired along with Precious Achiuwa in the offseason deal that sent Kyle Lowry to Miami — wasn’t with the team.

“First of all, he’s a really good dude, extremely professional, very wise ... enjoyable guy to be around and coach,” coach Nick Nurse said.

Dragic, from Slovenia, has played in just five games with the Raptors, averaging 8.0 points, 1.8 assists and 2.8 rebounds and 17.9 minutes. He’s played just once since Oct. 25.

“He has been a complete professional in the time that he has been with the Raptors. Goran has been a great mentor to our younger players and a valued teammate for our veterans,” Webster said in a statement. “He will continue to work out and stay in shape during his time away.”

Webster said there is no definite timeline for a return.

Editor’s Note: This article was originally published in 2017, but we’re re-heating it for the 15th anniversary of Kobe Bryant scoring 81 points against the Toronto Raptors. Enjoy. Kobe Bryant’s place among all-time NBA greats probably isn’t going to stop being debated anytime soon. His fans will point...
NBA・2 DAYS AGO
NBA Analysis Network

The New York Knicks are going to be a team to keep a very close eye on ahead of the NBA trade deadline. They already swung a deal with the Atlanta Hawks to acquire Cam Reddish and could look to make more moves. One intriguing potential trade target could be Toronto Raptors veteran point guard Goran Dragic.
NBA・9 HOURS AGO
ClutchPoints

The Phoenix Suns are steamrolling the NBA once again. They became the first team to win 30 games this season due to their elite offense and even better defense. It’s not a matter of if, but who on Phoenix’s roster gets named an All-Star. Devin Booker has been...
PHOENIX, AZ・17 DAYS AGO
fadeawayworld.net

Russell Westbrook has been underwhelming since he joined the Los Angeles Lakers before the start of this season. The former MVP has received a lot of the blame for the Lakers underperforming, with fans and analysts naming his inefficient play and careless turnovers for the Lakers' struggles. Considering all of that, there have been rumors that the Lakers are already willing to trade Westbrook.
NBA・21 HOURS AGO

Denzel Washington On Who Is The Greatest Basketball Player Of All Time: "I Was At The Chicago Bulls Game... When Michael Jordan Made That Famous Shot, And We Went Out To Dinner That Night..."

When it comes to the debate for being regarded as the greatest player of all time, usually people tend to choose either LeBron James or Michael Jordan. Even among them, the majority of people tend to tilt towards Jordan. After all, MJ achieved a lot of things in the NBA....
NBA・1 DAY AGO
fadeawayworld.net

Vince Carter was a superstar, one of the most entertaining players to ever enter the NBA. His highlight-reel dunks and explosive scoring made him must-watch TV, especially in his early years with the Toronto Raptors. However, another thing that made Carter so impressive was his longevity, he made a league appearance in 4 different decades.
NBA・19 HOURS AGO
FastBreak on FanNation

Patrick Beverley has been ruled out for Sunday night's game between the Brooklyn Nets and Minnesota Timberwolves.
NBA・1 DAY AGO
FastBreak on FanNation

Ja Morant of the Memphis Grizzlies tweeted about the Los Angeles Rams and Tampa Bay Buccaneers game.
NBA・1 DAY AGO

Alex Caruso is out 6-8 weeks with a wrist fracture suffered during Grayson Allen’s flagrant foul that drew the fury of Chicago Bulls staff: ‘Really hope the league takes a hard look’

The rivalry between the Chicago Bulls and the Milwaukee Bucks doesn’t need any extra heat this season, but Grayson Allen was happy to pour gasoline on the fire Friday night. Allen earned an ejection and a flagrant-2 foul after throwing Alex Caruso to the court to prevent a breakaway dunk in the Bulls’ 94-90 road loss to the Bucks. But those repercussions couldn’t offset the ensuing disaster ...
NBA・2 DAYS AGO
fadeawayworld.net

Charles Barkley and Michael Jordan were very close during their playing careers. Jordan and Barkley entered the NBA at the same time, as part of the legendary 1984 NBA Draft class. Jordan went to the Bulls, and Chuck would join the Philadelphia 76ers. But Barkley found more success when he was in the Western Conference.
NBA・1 DAY AGO
Chicago Tribune

The Chicago Bulls came inches from claiming the first round of battles with the Milwaukee Bucks this season, falling short by four points in a 94-90 loss Friday night at Fiserv Forum. It wasn’t the prettiest game for either team — both shot under 20% from 3-point rangein a vintage Midwestern slugfest as the Bucks and Bulls jockey for position at the top of the Eastern Conference. The Bulls ...
NBA・2 DAYS AGO
fadeawayworld.net

When Phil Jackson Called Out LeBron James For Traveling Every Time He Catches The Basketball If He's Off The Ball: “He Catches The Ball, Moves Both His Feet. You See It Happen All The Time.”

Phil Jackson's name resonates with winning in the NBA. The legendary coach arrived on the scene with the Chicago Bulls as an assistant coach for the franchise. Later on, he took on the responsibilities as a head coach and won six NBA Championships with the team. Apart from that, Jackson,...
NBA・1 DAY AGO

Jordan Poole had an incredible move on Jordan Clarkson in the game between the Utah Jazz and Golden State Warriors.
NBA・1 DAY AGO
The Spun

Will John Wall be moved ahead of the NBA’s trade deadline next month?. According to a report from The Athletic, multiple teams are monitoring the Houston Rockets situation ahead of the trade deadline. Wall, a five-time NBA All-Star in Washington, has not been playing in Houston this season. He’s...
NBA・1 DAY AGO
San Diego Union-Tribune

Khris Middleton scored 34 points and Jrue Holiday added 26 to lead the Milwaukee Bucks to a 133-127 victory over the Sacramento Kings on Saturday night, making up for the absence of Giannis Antetokounmpo.
NBA・2 DAYS AGO
Sportsnaut

With the 2021-22 NBA season in full swing, basketball fans are putting on their jerseys and filling up arenas around
NBA・1 DAY AGO
FastBreak on FanNation

Grizzlies Injury Report Against The Mavs

The Memphis Grizzlies are in Dallas to play the Mavericks on Sunday night.
NBA・8 HOURS AGO
All Hawks

With All-Star fan voting ending Saturday night at midnight, Cavaliers forward Kevin Love made one last plea for two of his teammates – Darius Garland and Jarrett Allen plus other notes.
NBA・2 DAYS AGO
fadeawayworld.net

LaMelo Ball Explains Why He Never Gets Nervous On The Court: "My Pops Told Me, You Can't Get Nervous In Basketball. Someone Has A Gun To Your Head, That's Nervous."

LaMelo is one of the NBA's brightest talents, a player that excels in multiple aspects of the game and plays fearlessly. Since he was drafted by the Charlotte Hornets, LaMelo has made several highlight-reel plays and a large part of that is down to how fearless he is on the court.
NBA・1 DAY AGO