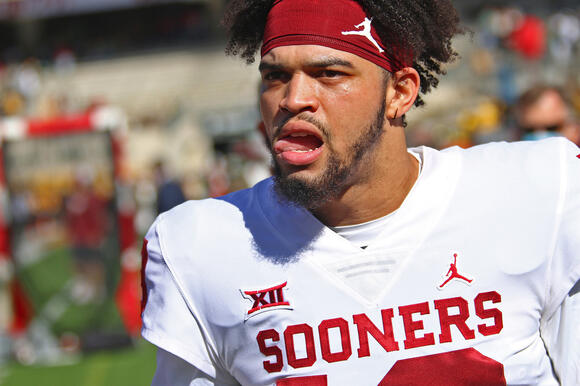 Oklahoma quarterback Caleb Williams publicly reacted to Sunday’s stunning news of Lincoln Riley’s departure for USC on Twitter, showing support for the man who coached him in a crushing loss to Oklahoma State less than 24 hours earlier.

Multiple news outlets are reporting Riley has already accepted the USC job, and Williams’s tweet would seem to indicate he's been informed the same.

Williams committed to OU on July 4, 2020 after Georgia prospect Brock Vandagriff decommitted from the Sooners six months earlier, then took over the starting job from Spencer Rattler in the middle of this season after Rattler struggled to find a rhythm.

According to Williams’s father, Carl, Caleb Williams was willing to walk-on at OU if Vandagriff remained committed strictly because he wanted to be coached by Riley.

Sources told SI Sooners that once Vandagriff found out Williams was coming to OU, he decided to flip to Georgia.

With the NCAA transfer portal remaining open, Williams leaving Oklahoma—perhaps to join Riley at USC, perhaps for his second choice of LSU—is now in play, although the "#boomer" sign-off at the end of his tweet will provide hope to Sooners fans that he plays to stay in Norman.

As National Signing Day approaches, Sports Illustrated All-American has published the final SI99 rankings for the 2022 recruiting class. A pair of Oklahoma commits made it into the group, as plenty of OU targets and former commits also litter the rankings of the top 99 players in the country. Sooner...
COLLEGE SPORTS・14 HOURS AGO
AllSooners

One of the most underrated players on Oklahoma’s roster is defensive lineman Jalen Redmond. After opting out of the 2020 season and missing some time in 2021, it can be easy to overlook how productive the Midwest City, OK native has been when he’s made it onto the field.
NFL・15 HOURS AGO

Oklahoma softball will start 2022 where they left off last June: on top of the mountain. The Sooners were ranked as the unanimous No. 1 team in the ESPN.com/USA Softball Collegiate Preseason Top 25 poll, USA Softball announced on Tuesday morning. Last year, Patty Gasso’s Sooners took the scenic route...
OKLAHOMA STATE・15 HOURS AGO
AllSooners

Watch Oklahoma head coach Porter Moser's full zoom press conference from Tuesday, Jan. 25 ahead of the Sooners' clash with the West Virginia Mountaineers on Wednesday night in Morgantown, WV. Want to join the discussion? Click here to become a member of the AllSooners message board community today!. Sign up...
MORGANTOWN, WV・10 HOURS AGO
AllSooners

Watch highlights of 2023 4-star Oklahoma quarterback commit Jackson Arnold out of Guyer High School in Denton, TX. Want to join the discussion? Click here to become a member of the AllSooners message board community today!. Sign up for your premium membership to AllSooners.com today, and get access to the...
DENTON, TX・1 DAY AGO
AllSooners

Kansas State’s Ayoka Lee shattered the NCAA single-game scoring record against Oklahoma on Saturday in Manhattan, KS. Lee, a 6-foot-6 junior from Byron, MN, scored 61 points against the Sooners as the Wildcats routed OU 94-65. The previous record was held by Washington’s Kelsey Plum, who scored 57. The...
MANHATTAN, KS・2 DAYS AGO

A former Oklahoma star is trying to help his team make a postseason surge. Former Sooners guard Trae Young and his Atlanta Hawks haven’t been able to capitalize on the deep playoff run of a year ago to this point in the season, but they are certainly starting to play better basketball recently behind stellar play by the Oklahoma-native.
NBA・1 DAY AGO
AllSooners

Sooners in the NFL: Divisional Weekend

And then there were four. After a heart-stopping Divisional Round of the NFL Playoffs, just four teams remain in the running for the ultimate prize of the Lombardi Trophy and a Super Bowl title. For former Oklahoma running back Joe Mixon and the Cincinnati Bengals, Saturday presented the opportunity to...
NFL・1 DAY AGO