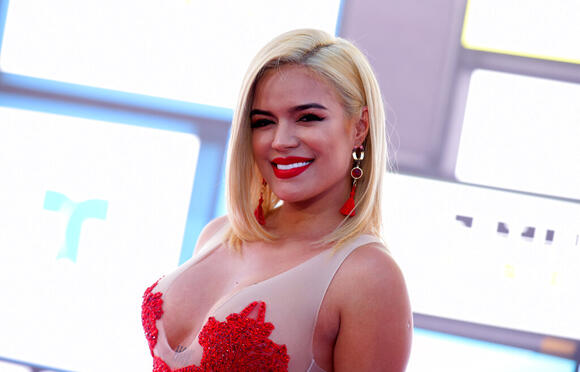 Colombian singer Karol G is sore all over but basically okay after suffering a long fall on a stage staircase.

Performing on Friday at the FTX Arena in Miami , the Colombian reggaeton star started to descend a long staircase at the start of a song. But as the footage shows, she missed a step and went tumbling down.

Fortunately, she quickly recovered, and the crowd cheered as she arose from the bottom of the stairs and continued on.

“All my nails broke, I think my knee broke. Everything hurts,” she told the crowd in Spanish later in the show. “After having filled this arena for the first time in my life… I wanted it to be perfect,” she added.

Carolina Giraldo Navarro is a 30-year-old singer. She won the Latin Grammy Award for best New Artist in 2018 and has been nominated for several Billboard Latin Music awards.

Saw the video on TMZ & her singing continued as she was falling , total giveaway that she was lip syncing 🤦🏻‍♀️😂!

She has a perfectly good set of air bags I really hope they helped break 🤣 her fall 😂..

Kathryn Kates, a veteran character actress who appeared in such TV series as Orange Is the New Black, Seinfeld and Law & Order: SVU and The Sopranos prequel movie The Many Saints of Newark, has died. She was 73. Her reps at Headline Talent Agency said Kates died Saturday of cancer in Florida. “Kathryn has been our client for many years, and we have grown much closer to her in this last year since she knew of her cancer returning,” Headline Talent said in a statement. “She was always incredibly brave and wise and approached every role with the greatest of passion. She will be greatly...
NEWARK, NJ・7 HOURS AGO
Deadline

Disney has responded to remarks made yesterday by award-winning actor Peter Dinklage that called the studio’s plans for a live-action remake of Snow White and the Seven Dwarfs “f*cking backwards.” A Disney spokesperson told Deadline, “To avoid reinforcing stereotypes from the original animated film, we are taking a different approach with these seven characters and have been consulting with members of the dwarfism community. We look forward to sharing more as the film heads into production after a lengthy development period,” . Disney, Deadline understands, has cultural consultants on all of its live-action films including previous titles Aladdin and Mulan, in addition to...
MOVIES・11 HOURS AGO
Deadline

As reporters were being whisked away from a White House meeting on Monday, Fox News’ Peter Doocy shouted one last question to President Joe Biden. “Do you think inflation is a political liability …in the midterms?” Doocy could be heard asking. Biden then could be heard muttering, in a bit of sarcasm, “No, it’s a great asset. More inflation. What a stupid son of a bitch.” The reporters had been brought in to catch a portion of the meeting and Biden’s remarks to his Competition Council, an event on Monday devoted to discussing ways to reduce costs and boost wages. “Our economy shouldn’t be...
PRESIDENTIAL ELECTION・1 DAY AGO
extratv

Over a month after announcing his split with Camila Cabello, Shawn Mendes has released the new music video for “It’ll Be Okay,” seemingly inspired by their breakup. The music video reunited Shawn with director Jay Martin, who also worked on his videos for “Stitches” and “There’s Nothing Holdin’ Me Back.”
CELEBRITIES・12 DAYS AGO

“We don’t talk about ‘Encanto'” is a phrase that may be being said in the Gunna and Weeknd households this week, as both of those hit artists had to step aside to let the smash Disney soundtrack reclaim its No. 1 position atop the Billboard 200 album chart. “Encanto” continues to grow, with 104,000 album-equivalent units — a 9% increase — pushing it back to the top. Last week’s No. 1, Gunna’s “DS4Ever,” slips a spot to second place with 96,000 units, a decline of 36% from its opening frame. The Weeknd’s “Dawn FM,” which bowed last week at No. 3,...
MUSIC・1 DAY AGO
shefinds

Ben Affleck and Jennifer Lopez are the couple we never knew we needed this year! Although they are 2021 couple goals and appear to be living their best lives right now, things weren’t always so peachy with the former exes who initially dated between 2000 and 2004! If you always wanted to know more details about their widely-publicized split and why they called off their engagement just days before their wedding in 2004 then you’re in luck, as the 49-year-old The Last Duel actor just revealed the real reason for them going their separate ways 17 years ago!
CELEBRITIES・29 DAYS AGO
The US Sun

KANYE West is apparently not a fan of his young daughter North wearing makeup and posting on TikTok, and he's taking his anger out on ex Kim Kardashian. In an interview on Hollywood Unlocked, the 44-year-old rapper opened up about a variety of ongoing issues with his ex, and the way she is raising their children.
BEHIND VIRAL VIDEOS・9 HOURS AGO
Popculture

Beloved comedian Louie Anderson died on Friday at the age of 68 after he was hospitalized in Las Vegas last week. His publicist Glenn Schwartz confirmed to The Washington Post that the Emmy-winner's cause of death was complications with his non-Hodgkin's lymphoma. He had been privately battling cancer for a decade.
CELEBRITIES・2 DAYS AGO

Vivica A. Fox Shares An Update From Regina King Following The Death Of Her Son

Vivica A. Fox is speaking on behalf of her longtime “friend and sister” Regina King following the death of her son Ian Alexander Jr., King’s only son died by suicide on Wednesday (Jan. 19) days after his 26th birthday. During the segment of her show Cocktails with...
CELEBRITIES・17 HOURS AGO
Popculture

Jennifer Lopez may be dating her former love Ben Affleck at the moment, but she was previously in a serious relationship with Marc Anthony. After seven years of marriage, the pair, who share twins Max and Emme, broke up. What went wrong? During an interview with W Magazine, Lopez explained that she suffers from panic attacks. She shared that this anxiety led her to determine that she should part ways from Anthony, whom she split from in 2011.
CELEBRITIES・2 DAYS AGO
The US Sun

SISTER Wives' Meri Brown defended Robyn against social media trolls as she said "everyone hates" the star for breaking up the family. The polygamist family has been struggling to stay intact after Christine walked away and some other wives are considering moving on as well. Meri, 51, spoke out about...
RELATIONSHIPS・14 HOURS AGO
The Independent

YouTuber and crafter Melanie Ham, who was well-known for the stories about her art and personal life she shared on social media, has died at the age of 36.According to posts shared to her social media accounts, which were published by her husband Robert Ham, Ham passed away from cancer on 12 January.“It is with a heavy heart and deep sadness I share the news of the passing of my sweet, amazing, beautiful wife Melanie,” the caption of the Instagram post reads. “If you’ve been following our journey I’m sure you were, like us, hopeful she could defeat this insidious...
CELEBRITIES・9 HOURS AGO

As NBA YoungBoy taunts rappers and promotes his latest project Colors, an ex-girlfriend of his is making her commitment to him known. A woman named Lil Blue spoke out on Monday (January 24) after video emerged of her getting YoungBoy’s government name, Kentrell, tattooed on the inside of her lower lip. Apparently, the video was shared without Blue’s permission, and she had some thoughts on all the opinions circulating.
NBA・1 DAY AGO
Life and Style Weekly

Sending a message? Fans think Kim Kardashian shaded estranged husband Kanye West with her latest gym outfit by wearing Nike Air Max 95s instead of her usual Yeezy sneakers. The Keeping Up With the Kardashians alum, 41, shared a slew of photos via Instagram on January 22 showing off her adorable pink workout attire. While she was seemingly flaunting her matching set from Bo + Tee, which retails for less than $100, fans couldn’t help but notice she put her Nike Air Max shoes on full display.
CELEBRITIES・1 DAY AGO
thesource.com

Cardi B is demanding justice in the death of a Black woman in Connecticut who died in her home the day after she had a date with a White man. The 29-year-old Bronx rapper tweeted to her 21.4 million Twitter followers that the media mishandled the facts while police have not questioned the White man as a suspect because of his race.
CONNECTICUT STATE・18 HOURS AGO
Reality Tea

When season 2 of Netflix’s Cheer came out, I managed to binge it in two days. I loved season 1 and was curious to see where season 2 could take us. Like many fans, I was aware of the arrest and allegations of season 1’s breakout star, Jerry Harris. Which was shocking and upsetting. But […] The post Cheer Star Monica Aldama Gives An Update On Relationship With La’Darius Marshall Since Their Falling Out During Season 2 appeared first on Reality Tea.
TV SERIES・5 DAYS AGO
GlobalGrind

A YouTube star who was placed in a coma for two months while battling Covid has revealed how she dreamed her body was 'floating down a river' while comatose and that she loves 'mundane moments' now that she is well. Grace Victory, 31, from High Wycombe, who has built a...
TV & VIDEOS・1 DAY AGO
XXL Mag

Although Kanye West is going through a divorce with his estranged wife, Kim Kardashian, it appears he sent a stern warning to the Kardashians when it comes to his children. In an interview with Jason Lee of Hollywood Unlocked, which premiered on Monday (Jan. 24) on YouTube, the Chicago rapper-producer, now known as Ye, spoke candidly about his impending divorce and how he plans to stay in his children’s lives no matter what.
HIP HOP・1 DAY AGO
countryliving.com

Kelly Clarkson is a singer, author, daytime TV host and fashionista. When she isn’t coaching her team on The Voice, the Texas native is having a blast leading discussions on The Kelly Clarkson Show. Apart from featuring celebrity guests and talking about the latest news headlines, Kelly shows off her breathtaking vocals in her Kellyoke segment. And if that wasn’t enough for folks to tune in every weekday, the American Idol alum always steps onto the stage with a buzz-worthy outfit.
BEAUTY & FASHION・2 DAYS AGO