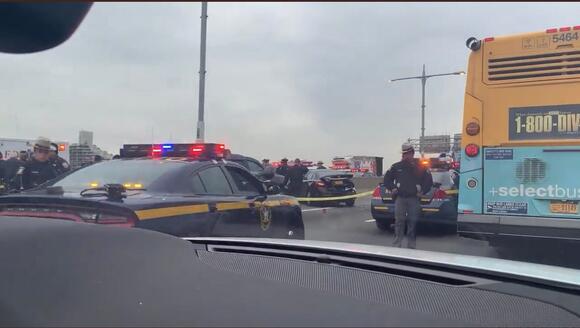 NEW YORK (1010 WINS) — A New York trooper was hospitalized after he was struck by an alleged stolen vehicle on the Robert F. Kennedy Bridge Sunday afternoon.

State Police said the trooper was struck by the car on the Queens span of the bridge before 1:00 p.m.

Authorities said the trooper suffered a minor leg injury and was transported to NYC Health & Hospitals/Elmhurst. Officials said police fired back at the car during the incident.

According to the MTA, a bridge and tunnel officer was also injured.

The 21-year-old driver has been charged with unauthorized use of a motor vehicle, reckless endangerment, vehicular assault, fleeing, obstruction of governmental administration, leaving the scene of an accident with injuries and unlicensed operation of a motor vehicle.

The 17-year-old passenger was charged with criminal possession of a weapon, possession of an imitation firearm, obstruction of governmental administration and unauthorized use of a motor vehicle.

Their identities have not been publicly made available at this time.

The NYPD said the northbound right lane and all Bronx-bound lanes on the bridge are open, but delays are expected in the area.

MTA officials said two Manhattan/Bronx-bound lanes are closed and one Queens-bound lane is closed on the Queens side of the Queens span until noon Monday amid an investigation by the NYPD's Crime Scene Unit.

The NYPD released video footage of a man they said posed as a food delivery worker and fatally shot a man on the Lower East Side last week, according to authorities.
NEW YORK CITY, NY・9 HOURS AGO
1010WINS

Yonkers Police are asking people to avoid an area of Main Street as officials investigate a police-involved shooting.
YONKERS, NY・2 HOURS AGO
1010WINS

A school bus driver has been arrested and charged after a 15-year-old girl was fatally struck in a hit-and-run collision in Brooklyn Monday morning, according to police.
BROOKLYN, NY・1 HOUR AGO
1010WINS

Officials are searching for a man accused of breaking into a Bronx Burger King earlier this month, according to the NYPD.
BRONX, NY・13 HOURS AGO

A 4-year-old girl died days after she sustained critical injuries from a car crash on Long Island that also led to the arrest of her mother, who was allegedly driving while on drugs at the time, New York State Police said Monday.
RIVERHEAD, NY・4 HOURS AGO
1010WINS

Police launched an investigation after a group of suspects beat and robbed a 24-year-old man at gunpoint inside a Manhattan subway station early Monday, authorities said.
NEW YORK CITY, NY・12 HOURS AGO
1010WINS

Officials discovered the decomposed body of an 84-year-old inside his Brooklyn home over the weekend, police confirmed Monday.
NEW YORK CITY, NY・7 HOURS AGO
1010WINS

The NYPD is searching for a man who is sought in connection with a robbery that occurred at a TJ Maxx in Brooklyn last month, authorities said.
NEW YORK CITY, NY・14 HOURS AGO

A man who escaped police custody from a Brooklyn hospital is back behind bars and facing new charges, police said late Saturday.
BROOKLYN, NY・1 DAY AGO
1010WINS

A man is in custody as the NYPD investigates a multi-vehicle collision that occurred in Brooklyn Thursday afternoon, according to authorities.
NEW YORK CITY, NY・3 DAYS AGO
1010WINS

The first reported shooting happened Friday just before 10 p.m. at the Lillian Wald Houses on the Lower East Side, located at 691 FDR Drive.
NEW YORK CITY, NY・2 DAYS AGO

Authorities launched an investigation after a man was discovered stabbed to death Thursday night in Harlem, according to the NYPD.
NEW YORK CITY, NY・3 DAYS AGO
1010WINS

Police are searching for a woman accused of violently assaulting an employee at a Bronx dry cleaner earlier this month, authorities said.
BRONX, NY・3 DAYS AGO
1010WINS

Police have charged a homeless man after he allegedly pushed a 40-year-old Asian woman to her death in front of a subway train in Times Square on Saturday morning.
NEW YORK CITY, NY・1 DAY AGO
1010WINS

The NYPD on Thursday released surveillance video of a man they are looking to identify for slashing a 77-year-old man during an argument aboard a subway train in Brooklyn, authorities said.
NEW YORK CITY, NY・4 DAYS AGO

The NYPD is searching for an suspect who attempted to carjack a vehicle in Midtown, before clashing with cops and fleeing, police said Thursday as they released police body camera footage from the incident.
NEW YORK CITY, NY・4 DAYS AGO
1010WINS

Police are searching for a man who was caught on surveillance video repeatedly firing a gun at a city speed camera in Queens earlier this month, authorities said.
QUEENS, NY・4 DAYS AGO
1010WINS

The 28-year-old victim was in front of a building on E. 198th Street, near Valentine Avenue, in the Jerome Park section around 5:30 a.m. Sunday when she was attacked by the duo, according to police.
BRONX, NY・4 DAYS AGO