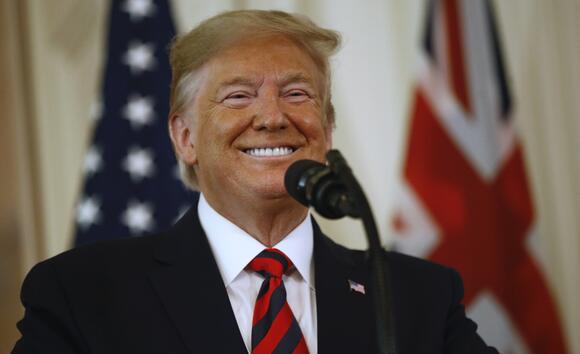 A Moldovan-born artist is making waves in the New York art scene with her collection of paintings titled "Trump: Parallel Universe,” depicting the former president in all sorts of scenarios.

Lena Ruseva, 44, is the artist behind the controversial works, which show Donald Trump in several drastically different scenes from history and theology, including Trump as an Egyptian sphinx, a Buddhist monk, and as Michael the archangel casting President Joe Biden from the White House .

“I wanted to play around with childish fantasies,” Ruseva told the New York Post . “Some people hate him and call him racist. Some people love him and they are real fanatics. Everyone has their own picture of Donald Trump."

“I like Donald Trump as he is a strong person,” Ruseva continued. “It’s easy to criticize. It’s easy to say somebody is wrong or bad, or whatever, but how many people have reached what he reached?”

Ruseva is a green card holder from Moldova who now lives in New Jersey, according to the New York Post . She immigrated to the United States in 2012 and got her start in the art world as a mural painter.

An exhibit featuring Ruseva's artwork was held at the Metropolitan Republican Club last month. Ruseva also recalled a gallery that canceled her exhibit after it received threats related to the politics of the art. She says she is concerned about encroachments on free speech in the U.S.

“In Russia, you try and post something against government [and] in three to four hours someone will knock on your door. I hope it’s not going to happen here,” she explained.

Trump's the perfect Fraudster. PHONY smile, fake persona, he reminds me of the Joker in Batman. Many of us can't stand to hear his voice, or look at his face anymore.

She must be an Illegal immigrant friend of Melania. That overstadyed their Visa like she did.

The top Republican on the banking committee has written to President Joe Biden questioning the geographic and industrial diversity of his Federal Reserve picks, raising the specter of legal problems that could threaten the nominations.
WASHINGTON, DC・17 HOURS AGO
Newsweek

Banks also tweeted a video of the exchange between President Joe Biden and Fox News' Peter Doocy with the caption "Congrats" and tagged Doocy.
PRESIDENTIAL ELECTION・19 HOURS AGO

"This November is about one thing: It's impeaching Joe Biden to stop this madness and to stop this illegitimate regime from destroying our nation," said Bannon.
PRESIDENTIAL ELECTION・1 DAY AGO
Business Insider

Donald Trump has been compared to Jeb Bush, who also went viral over a similar occurrence in 2016, on social media.
POTUS・2 DAYS AGO

The new Gallup survey found that 37 percent of U.S. adults rate Biden as a strong and decisive leader.
PRESIDENTIAL ELECTION・1 DAY AGO
Reuters

WASHINGTON, Jan 25 (Reuters) - Dominion Voting Systems Corp has told a court there is "no realistic possibility" that the voting machine manufacturer will reach settlements in its billion-dollar defamation lawsuits against Rudy Giuliani and Sidney Powell, lawyers who worked for former President Donald Trump. Dominion and another voting software...
U.S. POLITICS・16 HOURS AGO
Newsweek

The controversial remark came after Doocy asked the president if inflation will be a "political liability in the midterms."
PRESIDENTIAL ELECTION・1 DAY AGO
ABC 7 Chicago

"It's a great asset - more inflation." Biden shook his head and added, "What a stupid son of a (expletive)."
PRESIDENTIAL ELECTION・22 HOURS AGO

Hillbilly Ellegy author and US Senate candidate JD Vance was asked in an interview this weekend about his tweet calling for Donald Trump’s Twitter account to be reinstated after actor Alec Baldwin was involved in a fatal shooting.Mr Baldwin was involved in an incident last year during the filming of the movie Rust in which a gun in his hand fired and a round struck the film’s director of photography, Halyna Hutchins, killing her. The film’s director was also hit, but not fatally, and the incident is now under investigation.A day after the shooting occurred Mr Vance posted a...
CELEBRITIES・20 HOURS AGO
Newsweek

The president may have abandoned hopes of working with the GOP as he recently criticized his opponents in an address asking: "What are Republicans for?"
PRESIDENTIAL ELECTION・22 HOURS AGO
MSNBC

Civilian control of the military is an essential element of our government, designed to ensure that the military reflects the will of the people. The Founding Fathers, concerned that a strong unitary executive could co-opt the military, divided that control between the executive and legislative branches. That foundation ensures we...
PRESIDENTIAL ELECTION・1 DAY AGO
Newsweek

Biden shows why Trump was a better president

Once a lying, dog-faced pony soldier, always a lying, dog-faced pony soldier. During his campaign against President Donald Trump, candidate Joe Biden positioned himself as the anti-Trump: competent, compassionate, cool, calm, and collected. Democrats and their accomplices in the media rushed to advance this narrative. They touted his experience. They lauded his tenderness and kindness. Biden wouldn't be the guy sending mean tweets late at night. He would get the job done.
PRESIDENTIAL ELECTION・18 HOURS AGO
The Guardian