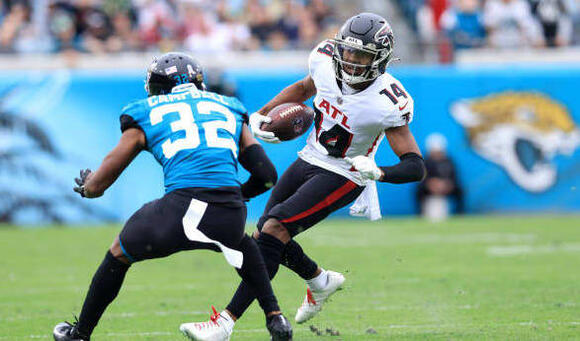 After failing to score any touchdowns in their past two games, the Atlanta Falcons needed a spark from their offense today against the Jacksonville Jaguars.

After two first-half touchdowns from offensive weapon Cordarrelle Patterson , wide receiver Russell Gage got in on the scoring spree with his first touchdown since Week 7.

On the play, Gage ran a slant route in the slot to find himself open in the middle of the field to step in for the easy score.

The touchdown capped off a 9-play, 88-yard drive that saw five passes go for over 10 yards.

It's a nice look for Gage, who was expected to have a more successful year after a breakout 2020 season.

Gage, a sixth-round pick from the 2018 class, strutted his stuff during the 2020 season on offense. With Julio Jones out for over half the season, it was a chance for the former LSU wideout to prove he could hang with the first-team offense.

After No. 1 wide receiver Calvin Ridley was placed on the non-football injury list in Week 8, Gage was expected to emerge as the team's top wideout.

However, the fourth-year pro has struggled alongside the entire offense and hasn't been able to rise to the occasion. Yet today, he has done just that. Gage leads the team with four catches for 40 yards and the score that has given the Falcons a three-score lead.

The Falcons lead the Jaguars by a score of 21-11 at the end of the third quarter.

Davis is an impending free agent this offseason.
NFL・2 DAYS AGO
Sportsnaut

Can the Tampa Bay Buccaneers win back-to-back Super Bowls? Find out how the 2021 schedule sets up nicely for Tom Brady and Co. to make another title run.
NFL・2 DAYS AGO
Sportsnaut

The Atlanta Falcons have two draft picks in the second round of the 2022 NFL Draft... their own at No. 43, and the Tennessee Titans pick they acquired in the Julio Jones trade. Jones and the Titans were eliminated from the playoffs on Saturday by the Cincinnati Bengals giving Atlanta...
NFL・2 DAYS AGO
Falcon Report

Julio Jones struggled in his first season away from the Atlanta Falcons.
NFL・1 DAY AGO
The Spun

On Tuesday night, a report emerged suggesting the Jacksonville Jaguars are reportedly close to naming their new head coach. According to a report from NFL insider Aaron Wilson, Tampa Bay Buccaneers offensive coordinator Byron Leftwich is the heavy favorite. Wilson cited several sources that predicted Leftwich will be the new head coach of the Jaguars.
NFL・7 HOURS AGO

After spending over a decade in the NFL, tight end Lee Smith has officially announced his retirement. Smith explained his decision in a heartfelt video released by the Atlanta Falcons, the last team he suited up for in the pros. In his announcement video, Smith revealed that he’s going to...
NFL・11 HOURS AGO
Sports Illustrated

The Atlanta Falcons look for help on the offensive line with former Pittsburgh Steelers, Chicago Bears starter Rashaad Coward. Julio Jones struggled in his first season away from the Atlanta Falcons. 13 hours ago. 13 hours ago. Gono signed a one-year $3.4 million contract with the Falcons prior to the...
NFL・1 DAY AGO
92.9 The Game

Falcons traded Julio Jones at right time, could Grady Jarrett be next?

Jon Chuckery says that the Falcons made the right move at the right time when they traded Julio Jones. Now, he wonders if the Falcons should consider trading DT Grady Jarrett in an effort to get a haul in return?
NFL・2 DAYS AGO
Chicago Tribune

The weekend slate of NFL playoff games was more than just riveting television for Chicago Bears fans. Five coordinators under consideration for the Bears head coaching job coached in the games. One executive in the running to be the Bears general manager saw his team advance to the AFC championship game. And one longtime thorn in the Bears’ side ruminated about what’s next after his loss. As ...
NFL・1 DAY AGO

No Payton? No Brady? New NFC South Would Appeal to Falcons

Last week, long-time NFL Draft analyst Mel Kiper Jr. released his first mock draft. He had the Atlanta Falcons taking cornerback Derek Stingley Jr. out of LSU to give the Falcons (with A.J. Terrell) possibly the best young corner duo in the NFL. In his comments he hedged his bets...
NFL・20 HOURS AGO
Falcon Report

Twitter Therapy: Did Falcons Stress You Out This Season?

Memo to Falcons: The Rams blew a lead vs. Brady - and won!

Apologies in advance. The most-lamented loss in Atlanta annals if not the history of humankind is about to be invoked. Maybe, probably, it says something about me that, after an astonishing weekend of playoff football – every game decided at 0:00 or later – I flashed back to the night of Feb. 5, 2017, in Houston. (The same city in which the Braves just won a World Series. See? I’m capable of happy flashbacks, too.)
NFL・1 DAY AGO
Falcon Report

Cordarrelle Patterson has been in the NFL since 2013, but it took coach Arthur Smith and the Atlanta Falcons to unlock his potential in 2021. And they did so by playing Patterson primarily as a running back. The 30-year-old Patterson, originally a first-round draft pick at wide receiver by the...
NFL・16 HOURS AGO
The Spun

With Ben Roethlisberger retiring, there are a lot of eyes on the Pittsburgh Steelers‘ remaining QB room – specifically on Dwayne Haskins. According to ESPN’s Jeremy Fowler, Haskins is going to be getting another shot in 2022. On Sunday he reported that the Steelers plan to place a restricted free agent tender on him.
NFL・2 DAYS AGO