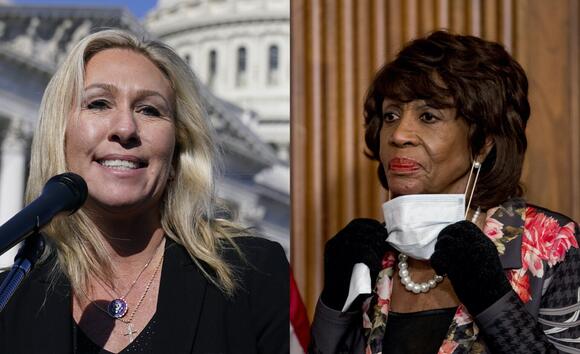 R ep. Maxine Waters called Rep. Marjorie Taylor Greene a "crazy woman" on Sunday as she chastised her Republican colleague for wanting to give Kyle Rittenhouse the Congressional Gold Medal.

The California Democrat tore into Greene, a firebrand from Georgia, during an interview Sunday on MSNBC, days after the GOP congresswoman introduced a bill to bestow the highest honor the legislative branch can give to the teenager fresh off his acquittal of all charges in the killing of two men and injuring of a third during riots in Kenosha, Wisconsin, last year.

The idea, Waters said, shows how "ridiculous" Greene is, along with GOP lawmakers expressing interest in hiring Rittenhouse as an intern.

"She has no respect for anything or anybody, the Constitution, the Congress of the United States," Waters said of Greene. "So we can expect anything from this crazy woman."

Greene's bill likely won't succeed, as it would need the support of two-thirds of both chambers of Congress, which are controlled by Democrats. Many Democrats expressed disappointment in the "not guilty" verdict, while some Republicans, including Greene, celebrated the teenager's acquittal in the case.

Greene also recently went after House Minority Leader Kevin McCarthy, a California Republican, saying he was responsible for the "failure of our leadership."

During the interview with host Jonathan Capehart, Waters was asked if she believes Greene is the active driver of "menace" on Capitol Hill. She responded by saying Greene is in the leadership of it, as she "outbursts oftentimes." Other conservatives, including Rep. Lauren Boebert , were cited by Waters as contributors to what she views as a hostile environment in the Capitol.

Waters herself has an extensive history of inflammatory and controversial remarks , having made headlines after she urged demonstrators to "get more confrontational" at protests following the death of Daunte Wright.

Maxime needs to take a look in the mirror before she speaks. Only a crazy person would wear that outfit Maxime is wearing. 😖😣😫

that's like when miss walters told the black lives matter to get in people's faces take the fight to the people.like she knows something about respect.

Maxine needs to be institutionalized and all her wealth turned over to the Treasury. To be evenly divided between the 50 states.

One of the Republican Party’s most controversial top-tier Senate candidates has reported spectacular fundraising returns, further raising his profile even as some worry he could hurt the party’s chances of retaking the upper chamber.Herschel Walker, who is challenging freshman Georgia Senator Raphael Warnock, pulled in some $5.4m in donations over the last quarter of 2021, a sum that vaults him to the very top ranking of Senate fundraisers this cycle.A former NFL player, Mr Walker was endorsed by Donald Trump last October, and since then has attracted the support of many other top Republicans, including Mitch McConnell and other...
PRESIDENTIAL ELECTION・1 DAY AGO
People

Marjorie Taylor Greene Gets Earful from Constituents During TV Appearance: 'We All Have Our Opinions'

Polarizing Rep. Marjorie Taylor Greene faced criticism from some of her own constituents during a Wednesday radio and cable TV appearance, when a caller to the program deemed her "an embarrassment to the state of Georgia." The moment came while the Republican lawmaker was participating in a call-in episode of...
GEORGIA STATE・12 HOURS AGO
HuffingtonPost

Callers Tell Rep. Marjorie Taylor Greene Exactly How They Feel About Her

Rep. Marjorie Taylor Greene (R-Ga.) sat for a call-in show on a local cable access station this week and it got awkward in a hurry. One caller described her as an “embarrassment to the state of Georgia.”. Another ripped her and others who don’t accept Donald Trump’s 2020 election...
GEORGIA STATE・20 HOURS AGO
The Independent

Marjorie Taylor Greene was left smiling awkwardly as a TV talk show caller said she was “an embarrassment to the state of Georgia”.The right-wing congresswoman was taking part in a call-in episode of the Night Talk show on local cable TV in her home state.“I just want to say thank God for Joe Biden,” the female caller said, causing Ms Green to turn and look at the hosts.But the caller was not done and added, “she is an embarrassment to the state of Georgia”.The criticism caused the Republican to tilt her head and purse her lips and force a smile...
ENTERTAINMENT・1 DAY AGO

The news that Stephen Breyer, one of the three remaining liberals on the Supreme Court, is expected to retire soon has set off fevered speculation about who will replace him. On Wednesday, a pair of Fox News hosts had an unlikely suggestion: vice-president Kamala Harris.President Biden pledged to nominate the first Black woman to the Supreme Court during his 2020 campaign, and the vice-president has reportedly been unhappy with her role in the administration thus far.“This person has to be a woman. She’s got to be Black, and she’s got to be younger. Anybody thinking what I’m thinking?” said...
CONGRESS & COURTS・1 DAY AGO
The Independent

Ohio senatorial candidate JD Vance was roundly mocked on Twitter after he celebrated an endorsement from extremist right-wing Congresswoman Marjorie Taylor Greene. "Honored to have Marjorie's endorsement. We're going to win this thing and take the country back from the scumbags," Mr Vance wrote on Twitter. The Hillbilly Elegy author is vying for a senatorial seat left vacant by outgoing Senator Rob Portman. In doing so, he has pivoted from taking a more nuanced approach to politics and has instead adopted the right-wing bomb thrower rhetoric exemplified by individuals like Ms Greene, Congresswoman Lauren Boebert, and Representative Matt Gaetz....
POLITICS・1 DAY AGO
Connecticut Post

It’s funny to think about the J.D. Vance of 2016. At the time, hot on the heels of his staggeringly successful memoir Hillbilly Elegy, he was a liberal darling, the media’s chosen intermediary between their ivory towers and the unwashed masses that mysteriously swept Donald Trump into power that November. Vance was a man of both worlds: Yale-educated, Kentucky-raised, and building a powerful mythos around himself as the personification of a united America, while the country around him grew ever more divided.
U.S. POLITICS・2 DAYS AGO
tennesseestar.com

The House minority leader, who helped scuttle an attempt to establish a bipartisan commission to investigate the insurrection, has spent months thrashing the select committee.
WASHINGTON, DC・2 DAYS AGO
HuffingtonPost

Rep. Marjorie Taylor Greene won’t return to Congress for a second term without confronting some opposition from Republicans in her Georgia district, where several challengers are trying to knock her out in the GOP primary. Greene is still highly favored to win a second term, but her opponents underscore...
GEORGIA STATE・3 DAYS AGO
cowboystatedaily.com

***For All Things Wyoming, Sign-Up For Our Daily Newsletter***. The message is something the Liz Cheney office has been reminding voters for nearly a year now: Wyoming’s congresswoman is a conservative and a staunch one at that. But ever since Cheney stood up to Trump after the January 6...
WYOMING STATE・3 DAYS AGO
allongeorgia.com

District 14 residents are invited to register to attend Congresswoman Marjorie Taylor Greene’s Town Hall in Ringgold on Tuesday, January 25, 2021 at 6:00PM. Attendance is limited to constituents only. Each attendee must complete the registration form. Location details will be emailed in advance of the town hall. A...
RINGGOLD, GA・3 DAYS AGO

In September, Greene told Insider that, "I have an independent investment advisor that has full discretionary authority on my accounts."
CONGRESS & COURTS・6 DAYS AGO
Fox News

Rep. Marjorie Taylor Greene Thursday compared vaccine mandates and cards to a Nazi "health pass" in a Telegram post mirroring holocaust-related COVID-19 rhetoric that landed the congresswoman in hot water last year. "This past year the Democrat's obsession with vaccine cards proved they are like the Nazi's who forced people...
CONGRESS & COURTS・7 DAYS AGO
The Independent

Marjorie Taylor Greene used Martin Luther King Day on Monday to claim that there is a “new segregation” for the unvaccinated against Covid-19, comparing their struggles to historic racism against Black people in America. In a post on Gettr, the Georgia Republican equated the segregation faced by Black Americans to the strict vaccine mandates in the US.“Rev Martin Luther King Jr spoke of promises given to us that all men and women are guaranteed the unalienable rights of life, liberty, and the pursuit of happiness,” she wrote. “Thanks to the hard work of Rev MLK Jr and others, growing up...
PUBLIC HEALTH・9 DAYS AGO
Fox News

How Rich Is Marjorie Taylor Greene?

Marjorie Taylor Greene, 47, is an American businessperson and politician who currently serves as a member of the U.S. Congress from Georgia's 14th District and is often referred to by her initials,...
ECONOMY・13 DAYS AGO
HuffingtonPost

Marjorie Taylor Greene Rants About Pandemic on Bannon’s Podcast, Baselessly Claims Fauci is ‘Responsible for All of This’

Rep. Marjorie Taylor Greene (R-GA) baselessly blamed Anthony Fauci for being entirely “responsible” for the coronavirus pandemic. “We have so many serious problems and we can point them all at one man. That is Dr. Fauci,” said Greene on the Thursday episode of former senior Trump adviser Steve Bannon’s War Room podcast.
CONGRESS & COURTS・14 DAYS AGO
POLITICO

The senator brushed off his previous phrasing as “sloppy” and “frankly dumb.”
CONGRESS & COURTS・20 DAYS AGO