PCMR opens on Canyons Village side 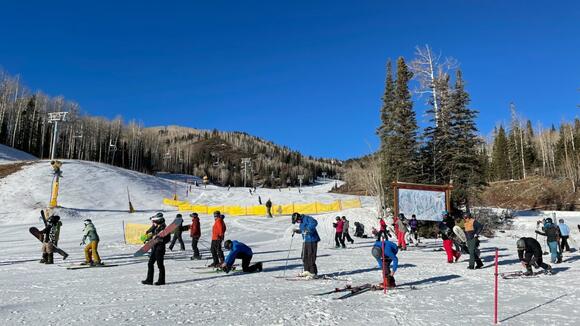 PARK CITY, Utah — Park City Mountain Resort (PCMR) opened for the season on Sunday morning on the Canyons Village side.

Skiers and snowboarders lined up early before the lifts started running at 8:45 am.

PCMR was initially scheduled to open on November 19 but had to delay those plans due to warm weather. The climate is still affecting PCMR, as only terrain off of the Saddleback and High Meadow lifts were available on Sunday. Park City Mountain Village will open on Wednesday, December 1 . “Even with man-made snow, it’s good to get out and make some turns,” said Chris, a snowboarder who lives in Salt Lake Valley. “It is kind of worrisome,” he said regarding the lack of snow. He said expects things to be normal come January. Despite being close to both of the Cottonwood Canyons, he prefers Park City because it’s more accessible.

“Excited it’s open, with all things considered,” said Parkite Greg Warner. “Better than sitting on the couch,” his wife Melissa said. They moved to Park City in 2015 for the powder.

“Snow is snow,” said Fritz, a local who boards.

Down in the Canyons Base Area parking lot, members of the Park City Professional Ski Patrol Association (PCPSPA) held what union President Brian Spieker called an “informational demonstration.” Patrollers with the union are currently without an active contract with Vail Resorts, which owns PCMR, heading into the season. Read more about their negotiations with the company .

“We wanted to reach out to the community to let them know we are negotiating for higher wages. We feel the company’s offered $15 company minimum wage does not reflect the skills and certification required of a ski patroller,” Spieker said. He said neighboring resorts are starting the same positions at $17 an hour. “Living wages are critical to retaining experienced personnel. We feel our guests deserve something more than a ‘minimum wage’ rescue.”

WINTHROP, Wash. — For the first time in 32 years, organizers of the Rendezvous Cross Country Ski Festival in West Yellowstone, Montana, had to cancel November’s traditional start-of-the-ski-season event due […]
WINTHROP, WA・2 DAYS AGO
TownLift

ALTA, Utah — Alta Ski Area is planning to replace the Sunnyside lift with a new, six-pack detachable lift during the summer of 2022, according to documents filed with the […]
SUNNYSIDE, UT・2 DAYS AGO
TownLift

SALT LAKE CITY — The Utah House of Representatives passed joint resolution S.J.R. 3 in a vote of 45 to 29, terminating the mask mandates that were in order in […]
SALT LAKE CITY, UT・4 HOURS AGO
TownLift

Peace House is an organization that works to end family violence and abuse through education, outreach, support services, and safe housing. However, they rely heavily on volunteers and community support […]
PARK CITY, UT・2 HOURS AGO
TownLift

PARK CITY, Utah — The author of a viral petition with over 40,000 signatures that criticized the management of Vail Resorts-owned Stevens Pass Ski Resort in Washington is now calling […]
PARK CITY, UT・3 DAYS AGO
TownLift

DEER VALLEY, Utah — For the ninth year in a row, at the World Ski Awards, the winner of the United States of America’s Best Ski Resort for 2021 was Deer […]
PARK CITY, UT・3 DAYS AGO

PARK CITY, Utah — Since January 8, officers with the Utah Division of Wildlife Resources (DWR) have relocated over a dozen moose, most of which were found wandering near Interstate […]
PARK CITY, UT・3 DAYS AGO
TownLift

Utah’s 1.9% unemployment rate is the lowest in history

PARK CITY, Utah — Utah’s seasonally-adjusted unemployment rate dropped to 1.9% in December, down from 2.1% in November, according to the Department of Workforce Services (DWS). The national unemployment rate […]
UTAH STATE・6 HOURS AGO
TownLift

ALTA, Utah — A missing skier was pronounced dead on Thursday morning after a search and rescue operation in the backcountry Grizzly Gulch skiing area, according to Fox13. The body […]
COTTONWOOD HEIGHTS, UT・1 DAY AGO

Salt Lake City currently has the worst air quality in the U.S.

SALT LAKE CITY, Utah — As of Tuesday afternoon, the air quality in Salt Lake City is the worst in the United States, according to IQAir. It is ranked #18 […]
SALT LAKE CITY, UT・3 DAYS AGO
TownLift

The people in the hot air balloon may be letting this weekend fly by, but they wouldn’t have it any other way. They’re getting a rare birds-eye-view of the rare […]
PARK CITY, UT・5 DAYS AGO
TownLift

Jobs of the Week, January 19

ST. GEORGE, Utah — The U.S. Bureau of Reclamation announced last week that it plans to adjust management protocols for the Colorado River in early 2022 to reduce monthly releases […]
SCIENCE・4 DAYS AGO
TownLift

PARK CITY, Utah – Melanie Webb, founder of WebbWell, has over 20 years of experience leading people to healthier lives through fitness. In 2019, she published “Adventures in Mother Nature’s […]
PARK CITY, UT・2 DAYS AGO
TownLift

LILLEHAMMER, Norway – The World Para Snow Sports Championships for athletes with physical disabilities got underway Tuesday and will continue through Sunday. The event has reached a milestone becoming the […]
PARK CITY, UT・2 DAYS AGO
TownLift

SUMMIT COUNTY, Utah — The communications team with Summit County is offering something new in 2022. The Summit in 6 podcast is a concise discussion about county-related events and topics, along […]
SUMMIT COUNTY, UT・3 DAYS AGO