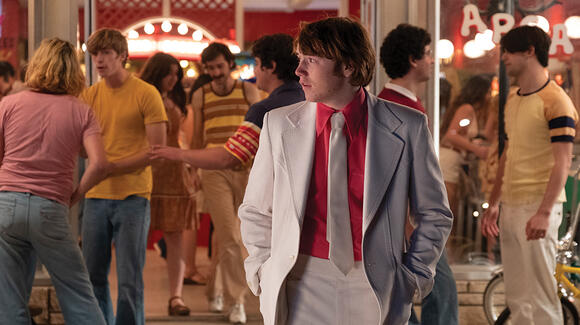 With speciality offerings like “Licorice Pizza,” the key metric is per-theater-average rather than overall box office tally since its playing in very few locations. From only four theaters in the country — two in New York and two in Los Angeles — “Licorice Pizza” brought in $335,000 in total and $83,852 per location, more than any other specialty film in nearly two years. In other words, PTA has landed the best PTA among arthouse titles since the onset of COVID-19.

In its first three days of release, “Licorice Pizza” surpassed A24’s black-and-white drama “C’mon C’mon,” which previously held the record for best platform launch after generating $135,447 on five screens — averaging to $26,889 per location. Prior to that, indie darling Wes Anderson set the pandemic-era arthouse benchmark with “The French Dispatch,” which grossed $1.3 million from 52 theaters — averaging $25,000 per location.

While not indie releases, other 2021 movies that secured robust theater averages include Sony’s comic book adventure “Venom: Let There Be Carnage” (averaging $21,300 per theater) and Disney’s superhero adaptation “Black Widow” (averaging $19,400 per theater).

“Licorice Pizza” was surprisingly popular with younger audiences. Among opening weekend ticket buyers, 72% were between the ages of 18 and 34, while 66% were male. MGM and United Artists Releasing, which backed the $40 million-budgeted “Licorice Pizza,” plan to expand the movie nationwide on Christmas Day.

Anderson is one of today’s rare marquee directors, meaning his name alone can sell tickets, and “Licorice Pizza” is the filmmaker’s first movie in four years. His most recent feature was 2017’s “Phantom Thread,” an Oscar favorite that generated $21 million at the domestic box office and $47 million worldwide.

Anderson, whose greatest hits include “Boogie Nights,” “Magnolia” and “The Master,” may find himself back in the awards conversation with “Licorice Pizza,” a comedic drama set in the 1970s San Fernando Valley. The film stars Alana Haim, Cooper Hoffman, Sean Penn, Tom Waits, Bradley Cooper and Benny Safdie.

Variety’s chief film critic Peter Debruge praised acting newcomers Haim, one-third of the band Haim, and Hoffman, the son of Philip Seymour Hoffman, in what he refers to as “a pair of terrific first-time performances.”

“‘Licorice Pizza’ delivers a piping-hot, jumbo slice-of-life look at how it felt to grow up on the fringes of the film industry circa 1973, as seen through the eyes of an ambitious former child actor plotting how to follow up his early screen career,” Debruge wrote.

Bradley Cooper confirmed during a conversation with Mahershala Ali as part of Variety’s “Actors on Actors” series, presented by Amazon Studios, that “Maestro” will finally start filming this May. Netflix’s “Maestro” marks Cooper’s first directorial effort since the blockbuster success of his feature debut, “A Star Is Born.” Cooper also stars in “Maestro” as esteemed Broadway composer Leonard Bernstein, with Carey Mulligan on board to play Bernstein’s wife, Felicia Montealegre. “I wanted to be a conductor since I was a kid,” Cooper told Ali about the new film. “I was obsessed with it, asked Santa Claus for a baton when I...
MOVIES・17 HOURS AGO
Variety

Sony’s blockbuster “Spider-Man: No Way Home” has narrowly edged out Universal release “Belfast” in the battle for the U.K. and Ireland box-office. “Spider-Man” enjoyed a sixth consecutive weekend atop the box office with £2.33 million ($3.1 million), according to numbers released by Comscore. Kenneth Branagh’s awards season favorite “Belfast” was close behind with £2.31 million in its debut weekend. “Spider-Man” now has a gross of £87.4 million and is within striking distance of “Avengers: Endgame” for the all-time sixth position at the box office. In its second weekend Paramount’s horror reboot “Scream” scared up £1.2 million in third place and now has...
MOVIES・20 HOURS AGO
Variety

As the once wide-open best picture race continues to narrow, Variety staffers take a look at some of the individual scenes that made us laugh, cry and think — sometimes at the same time. “Being the Ricardos” (Amazon) Lucille Ball (Nicole Kidman) pulls Madeline (Alia Shawkat), the only female writer on Ball’s “I Love Lucy,” out of the writers room for a little one-on-one discussion about a scene that Lucy has been trying to make funnier — or at least make logical, and therefore funny. Like Madeline, Lucy is a smart, funny, strong women in the early 1950s — a unicorn in this...
MOVIES・1 DAY AGO
The Hollywood Reporter

Sony Pictures has nabbed the worldwide rights to Rosalind Ross’ feature directorial debut, Father Stu, starring and produced by Mark Wahlberg. Mel Gibson, Jacki Weaver and Teresa Ruiz also star in the redemptive biopic about boxer-turned-priest Father Stuart Long now set to hit U.S. theaters on Good Friday, April 15. “Father’s Stu’s journey from troublemaker to clergyman was inspiring to many, including me. Rosey has done an incredible job capturing the essence of who he was and how he affected the people he met. I hope that with this film, we keep his spirit alive and continue his good works,” Wahlberg said...
MOVIES・14 HOURS AGO

Where to watch Licorice Pizza: Is the movie streaming?

Paul Thomas Anderson’s latest coming-of-age film to hit the big screens is entitled Licorice Pizza. Starring Alana Haim, Cooper Hoffman and the one and only Bradley Cooper, fans can’t wait to delve into the story. First, they want to discover where they can watch Licorice Pizza and whether the movie is accessible on streaming platforms.
MOVIES・8 DAYS AGO
IndieWire

Sure, Sharon Stone starred as a murderer in “Basic Instinct” — but does that mean she can spot one in real life? Welcome to “Murderville,” the town that has a different murder — and a different celebrity detective — every day. Senior Detective Terry Seattle (Will Arnett) runs the Homicide Division, but each guest star is left to catch up on the case without a clue… or a script. The six-episode meta-comedy lands on Netflix February 3. A spoof on classic procedural dramas à la “Law & Order” (for which we already know Arnett has memorized the theme song), “Murderville” has a...
TV SERIES・1 DAY AGO
The Guardian

‘I stayed at the party too long’: Ozark’s Jason Bateman on Arrested Development, smiling villains and his lost decade

Forty years after his breakthrough role in Little House on the Prairie, the actor is thrilling TV audiences as a drug cartel money launderer. But he almost threw his career away
TV SERIES・2 DAYS AGO
The Independent

Settling down to a film festival without leaving the house is a strange prospect. But due to the spread of Omicron, this is how everyone is experiencing this year’s Sundance Film Festival.Organisers have gone above and beyond to ensure the best viewing experience possible for virtual attendees and the filmmakers, whose films are being shown as part of the line-up.Sundance has long been the launchpad for many big films – The Blair Witch Project, Little Miss Sunshine, and Get Out to name just three – and this year’s programme hopes to follow suit: it’s a stacked list of world premieres, whether...
MOVIES・1 DAY AGO

‘Matrix’ and ‘Licorice Pizza’ worth a look, but skip ‘West Side Story’ remake

I went to the theater as many times in December as in the prior three months combined. The theaters were mostly empty, yet it felt good to spend time in the glow of the big screen. None of this week’s movies demand viewing away from home, but it may be a while before they are available on streaming platforms.
MOVIES・2 DAYS AGO
Michigan Daily

Messiness in PTA movies, and why it works in ‘Licorice Pizza’

Paul Thomas Anderson is the mastermind behind some of the finest films to grace the silver screen in recent memory, directing masterpieces such as “There Will Be Blood,” “The Master” and “Phantom Thread.” While these three films are known for their extreme precision in both visuals and storytelling, Anderson elected to take a different approach to his latest film “Licorice Pizza.” Instead of the painfully meticulous craft on display found in his work in the 2000s, Anderson opts for the laidback vibe of films like “Dazed and Confused,” “American Graffiti” and “Once Upon a Time in Hollywood.”
MOVIES・5 DAYS AGO
MovieMaker

The new Scream sparks a “requel” discussion; a doc plumbs the Chippendale’s murders; surprising news about the racist restaurateur in Licorice Pizza; what if the world isn’t going to end soon? All in today’s Movie News Rundown. But First: There will be no Rundown tomorrow...
RESTAURANTS・13 DAYS AGO

“Scream,” a reimagining of a horror franchise that once appeared to have run out of steam, dominated the box office this weekend, earning a scary good $30.6 million. The sequel is projected to earn $35 million over the four-day Martin Luther King Jr. holiday weekend, a spectacular result considering that “Scream” only cost $25 million to produce. It also represents some positive news for the bruised and battered cinema industry, considering that “Scream’s” success comes amid a spike in COVID-19. It helps that “Scream’s” target demographic is younger, which means that they may not have been as spooked by the highly contagious omicron variant that is fueling the latest iteration of a seemingly endless pandemic.
MOVIES・9 DAYS AGO
worldofreel.com

A good movie, said legendary Howard Hawks, is one that has “three great scenes and no bad ones.” Hollywood Elsewhere’s Jeffrey Wells has been consistently using this protocol to identify legitimate Oscar contenders. I’ve decided to use Hawks’ measuring stick for Paul Thomas Anderson’s “Licorice Pizza.” Why...
MOVIES・5 DAYS AGO
Current Publishing

‘Licorice Pizza’ is a slice of film enjoyment

I have immensely enjoyed the fact that movies have returned in full force during 2021. No more “COVID-19 absence” of big, important films. No more Oscar delays. Big directors, big stars, and big pictures are back. And I’ve liked many of this year’s offerings. But I have yet to be overwhelmed. I have yet to fall in love with a movie.
CARMEL, IN・8 DAYS AGO
maroonweekly.com

Licorice Pizza tells the story of the friendship between 15-year-old Gary Valentine, (Cooper Hoffman, son of Philip Seymour Hoffman) and 25-year-old Alana Kane (Alana Haim). The film is a blast from the past that reminds people of the good old days in the 70s. But suppose you weren’t alive during this period? In that case, Licorice Pizza does a great job of placing the viewer right in the middle of it, providing them with a sense of nostalgia for something they’ve never experienced.
MOVIES・10 DAYS AGO
awardswatch.com

Even Spider-Man isn’t safe from Ghostface. Paramount’s “Scream” — the fifth installment in the long running slasher franchise — notched an estimated $30.6 million at the North American box office this weekend, according to the studio. That number exceeded industry expectations, which had projected the film to make closer to $25 million in its weekend debut.
MOVIES・9 DAYS AGO
WISH-TV

Spider-Man is no match for Ghostface. The fifth installment of the iconic horror film franchise Scream debuted at the top box office spot this weekend with a killer $30.6 million in domestic box offices, ending Spider-Man: No Way Home's four-week reign. The sequel — the first of which to not...
MOVIES・8 DAYS AGO