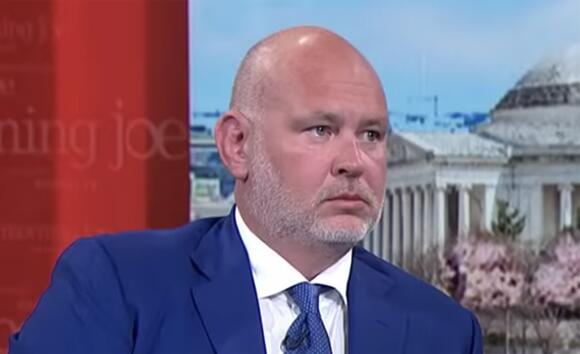 President Joe Biden was reportedly thankful for the Lincoln Project, a fundraising powerhouse that unleashed an onslaught of anti-Trump ads, after the 2020 election.

After he defeated his predecessor, Donald Trump, in November 2020, Biden placed a call to co-founder Steve Schmidt to express gratitude for the group helping him get elected, a source told Politico .

The Washington Examiner reached out to the Lincoln Project for comment. Politico said the White House did not comment.

The tidbit appeared in a report published Sunday about how the anti-Trump group has fallen out of favor with a wide swath of people.

Moderate Republicans and Never Trumpers, the report says, did not take kindly to co-founder Rick Wilson urging Trump to run again in 2024.

“It’s not that I want [Trump] to be here, I’d love for him to be eaten by a shark tomorrow,” Wilson said in defense of his comments. “I want Trump to run to destroy the people who are more sophisticated than Trump. I want to use Trump’s psychological problems to weaken him because I think the most dangerous thing we face is Trump with an Ivy League degree. All the abrasive authoritarianism and nationalism and none of the obvious deficits."

The Lincoln Project has grappled with other controversies over the past couple of years, including one involving the group's handling of sexual misconduct allegations against one of its co-founders, John Weaver, and a tiki torch stunt that rocked the Virginia governor's race this year.

I hope, I am not the only one thinking that putting a person that needs to retire not be the president. Yes, this includes trump. We need term limits for congress. It can not be your career.

way to late to bash trump . the red tsunami is coming in the midterms and the knockout is 2024 . Democrats can't do anything about it ,its to late

Lincoln Project is lefty commies role playing stuff they're not.

The top Republican on the banking committee has written to President Joe Biden questioning the geographic and industrial diversity of his Federal Reserve picks, raising the specter of legal problems that could threaten the nominations.
WASHINGTON, DC・17 HOURS AGO
WashingtonExaminer

House Majority Leader Steny Hoyer on Tuesday said he agrees with President Joe Biden’s assertion that the results of the midterm elections may not be legitimate to Democrats if they are unable to pass two election and voter overhaul measures.
PRESIDENTIAL ELECTION・19 HOURS AGO
Newsweek

Banks also tweeted a video of the exchange between President Joe Biden and Fox News' Peter Doocy with the caption "Congrats" and tagged Doocy.
PRESIDENTIAL ELECTION・19 HOURS AGO

"This November is about one thing: It's impeaching Joe Biden to stop this madness and to stop this illegitimate regime from destroying our nation," said Bannon.
PRESIDENTIAL ELECTION・1 DAY AGO
Business Insider

"It's a great asset - more inflation." Biden shook his head and added, "What a stupid son of a (expletive)."
PRESIDENTIAL ELECTION・23 HOURS AGO
Newsweek

The new Gallup survey found that 37 percent of U.S. adults rate Biden as a strong and decisive leader.
PRESIDENTIAL ELECTION・1 DAY AGO
Newsweek

The controversial remark came after Doocy asked the president if inflation will be a "political liability in the midterms."
PRESIDENTIAL ELECTION・1 DAY AGO
Newsweek

The president may have abandoned hopes of working with the GOP as he recently criticized his opponents in an address asking: "What are Republicans for?"
PRESIDENTIAL ELECTION・22 HOURS AGO

In past years, news anchors, reporters, commentators, and late-night hosts have unabashedly gushed over Republican senators who’ve broken ranks with their party, hailing them as "mavericks" and "heroes" for casting politics aside and voting with their "conscience." However, when Democrats like Kyrsten Sinema, D-Ariz., and Joe Manchin, D-W.Va., buck...
PRESIDENTIAL ELECTION・1 DAY AGO

Joe Biden s run for the Democratic presidential nomination was all but declared dead as he headed to the South Carolina primary in late February 2020. He had finished fifth in New Hampshire and fourth in Iowa. Still, Biden advised skeptics to withhold judgment until a state with a large pool of Black voters, the most reliable Democratic constituency, had a chance to weigh in.“Too often your loyalty, your commitment, your support for this party has been taken for granted,” he said. “I give you my word as a Biden that I never, ever, ever will.”Black voters delivered, recasting...
PRESIDENTIAL ELECTION・2 DAYS AGO
Newsweek

"He will be helpful in winning back House seats," she said Sunday, but predicted "there starts to be a break" after the midterms.
PRESIDENTIAL ELECTION・2 DAYS AGO
WTKR News 3