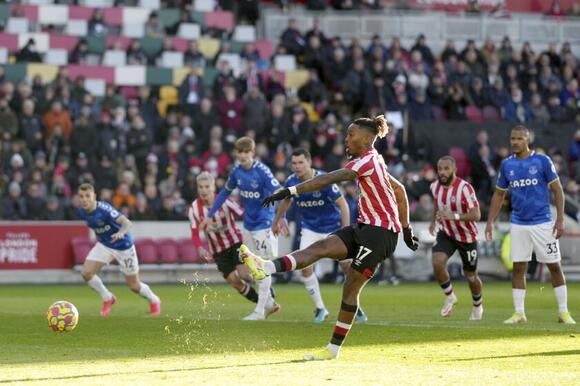 Ivan Toney gave Brentford a 1-0 victory over Everton that extended the winless run for Rafa Benitez's side to seven matches on Sunday.

Toney previously played under Benitez at Newcastle but struggled for playing time. His penalty in the 24th minute came after Andros Townsend's high boot caught Frank Onyeka in the face.

Brentford claimed a first home league win since the opening day of the season against Arsenal in August to move up to 12th. Everton is two places lower in the 20-team standings.

A football fan has been charged with assault after two Aston Villa players were floored by a bottle thrown from the crowd at Everton’s Goodison Park.Roger Tweedle, of Cranehurst Road, Walton, is accused of throwing a bottle that left Villa players Lucas Digne and Matty Cash on the ground on Saturday.The alleged incident occurred as Aston Villa celebrated a goal in the first half of the match.The 19-year-old, who is also charged with throwing an item onto the pitch, has been released on conditional bail.He will appear at South Sefton Magistrates Court on February 28.The game was Duncan Ferguson’s first...
PREMIER LEAGUE・2 DAYS AGO
The Independent

Liverpool moved to within nine points of Manchester City at the top of the Premier League table with an entertaining 3-1 win over Crystal Palace at Selhurst Park.Virgil van Dijk gave the visitors the lead in the eighth minute, thumping a bullet header beyond Vicente Guaita from an Andy Robertson corner. And Liverpool’s dominance was rewarded with a second shortly after the half hour mark when Robertson crossed for Alex Oxlade-Chamberlain to bring down and fire home at the back post.Palace finally got a foothold in the game towards the end of the first half and continued that urgency after...
PREMIER LEAGUE・2 DAYS AGO
The Independent

What the papers sayThe Daily Mail says Newcastle are chasing the signature of Brighton midfielder Yves Bissouma. It is believed Brighton would part ways with the 25-year-old Mali international for £50m, which would shatter Newcastle’s club-record transfer fee by £10m.Liverpool defender Joe Gomez is reportedly on the radar of Steven Gerrard and Aston Villa. According to The Sun, the 24-year-old England international centre-back is thought to have been on Gerrard’s wishlist for a while, with a possible January move on the cards.The London Evening Standard reports Arsenal are considering a move for Real Sociedad forward Alexander Isak, as their hopes...
PREMIER LEAGUE・1 DAY AGO
San Diego Union-Tribune

Leicester throws away lead again to draw 1-1 with Brighton

Ralf Rangnick praised Harry Maguire for producing a performance befitting the captain’s armband on his return to the Manchester United starting line-up.The world’s most expensive defender has been under close scrutiny this season, both for his displays in the heart of defence and leadership of the team.Maguire missed the first two matches of 2022 with a chest injury and was named on the bench against Aston Villa and Brentford as Rangnick favoured Victor Lindelof alongside Raphael Varane.But the United skipper was restored to the starting line-up against West Ham in the absence of Lindelof, who was supporting his family after...
PREMIER LEAGUE・2 DAYS AGO
The Independent

Eddie Howe and his Newcastle United squad headed for Saudi Arabia at the weekend having breathed new life into their bid for Premier League survival with a hard-fought victory at Leeds.However, while Howe and his staff put the players through their paces at a warm weather training camp in Jeddah, work continued apace behind to scenes to add to the January acquisitions of Kieran Trippier and Chris WoodHere, we take a look at some of the players who could follow the duo to St James’ Park during the final week of the winter window.Sven BotmanThe Magpies made the capture of...
PREMIER LEAGUE・1 DAY AGO
The Independent

Arsenal vs Burnley prediction: How will Premier League fixture play out today?

Arsenal and Burnley have played just two Premier League games between them so far in 2022.Mikel Arteta’s side controversially requested the North London derby be postponed last weekend - a request accepted by the Premier League. The clash with Tottenham being called off means they have not played a league match since the 2-1 defeat to Manchester City on New Year’s Day.Meanwhile, Sean Dyche’s struggling Burnley team have played the fewest games of any Premier League side. Their last league match came on 2 January against Leeds, but they have fulfilled just two league fixtures since 12 December.All this...
PREMIER LEAGUE・2 DAYS AGO
The Independent

Liverpool remain in the Premier League title race after a 3-1 win at Crystal Palace, but this victory – a 10th in a row over this particular opponent – owed far more to some world-class goalkeeping and a very questionable penalty call than to their own fine start to the match.The Reds were excellent for the first half an hour, then almost fashioned their own demise for the next 30 minutes. Only Alisson Becker proved an immovable barrier, and allowed the league’s second-placed team to move to within nine points of Manchester City, still with a game in hand.Early pressure...
PREMIER LEAGUE・2 DAYS AGO

Welcome to The Independent’s live coverage of a huge London derby between Chelsea and Tottenham at Stamford Bridge. Thomas Tuchel’s side have already beaten Spurs three times so far this season, scoring seven goals and keeping three clean sheets in the process. But Chelsea have struggled of late as their title ambitions have slipped away. They now sit 13 points off Manchester City as securing a top four place becomes a more realistic target.Meanwhile, Spurs are unbeaten in nine Premier League games under Antonio Conte and are now in a superb position to qualify for next season’s Champions League....
PREMIER LEAGUE・2 DAYS AGO
The Independent

Substitute Tobin Heath scored an injury-time equaliser as Women’s Super League leaders Arsenal snatched a 1-1 draw at Manchester City Heath drilled home in the second of six added minutes to ensure the visitors avoided a second straight defeat in the league following their shock loss to Birmingham a fortnight ago.Khadija Shaw had given City the lead in controversial circumstances after 65 minutes, the Jamaican international tapping home from close range from Lauren Hemp’s low cross.Arsenal were furious that play had been allowed to continue when the ball deflected off the referee in the build-up to the goal, but their...
WORLD・2 DAYS AGO
The Independent

Claudio Ranieri has been sacked by Watford after less than four months in charge, the Premier League club has confirmed. Watford’s 3-0 home loss to Norwich on Friday was the club’s 10th defeat in 13 Premier League games under Ranieri and it deepened their relegation concerns. It dropped Watford into the bottom three for the first time this season after an alarming run of form which has seen the club pick up just seven points since Ranieri was appointed on 4 October. With a two-week break until their next fixture, which is another crucial relegation six-pointer against bottom-side Burnley on...
PREMIER LEAGUE・1 DAY AGO
The Independent

Burnley take a point at Arsenal on their return to action

Burnley returned to Premier League action for the first time in three weeks to hold Arsenal to a goalless draw at the Emirates Stadium.The Clarets have seen a host of games postponed this month due to not having enough players available and fell to the foot of the table as their rivals were able to fulfil fixtures.Wins for fellow relegation candidates Norwich and Newcastle earlier in the weekend only heaped pressure on Burnley, but Sean Dyche’s side battled to a hard-fought point against a below-par Arsenal.The Gunners are still without a win in 2022 as their top-four ambitions continue to...
PREMIER LEAGUE・2 DAYS AGO

Chelsea beat Tottenham for a fourth time this season as goals from Hakim Ziyech and Thiago Silva handed them a 2-0 win at Stamford Bridge.Harry Kane thought he had given Spurs the lead shortly before half-time when he turned and swept home Steven Bergwijn’s cross. But referee Paul Tierney spotted a push from Kane on Silva in the build-up and disallowed the goal.Chelsea then found the opener less than two minutes into the second half when Ziyech cut inside before picking out the top corner from 25 yards out with a sensational left-footed strike.And it was 2-0 before the hour...
PREMIER LEAGUE・2 DAYS AGO
Sportsnaut

Austin FC announced the signing Monday of Norwegian defender Ruben Gabrielsen to a two-year contract with an option for the
MLS・1 DAY AGO
kentuckytoday.com

LONDON (AP) — A superb strike from Hakim Ziyech and Thiago Silva’s headed goal gave Chelsea a 2-0 win over Tottenham to end a four-match winless run in the Premier League on Sunday. Silva helped to protect parity before scoring, falling under a foul from Harry Kane in...
PREMIER LEAGUE・2 DAYS AGO
The Independent

Everton’s Alex Iwobi was sent off just seven minutes after coming on as Nigeria crashed out of the Africa Cup of Nations following a 1-0 defeat to Tunisia in the round of 16.Iwobi was dismissed after his yellow card for a challenge on Youssef Msakni was upgraded to red after a VAR check in the 64th minute.The three-time AFCON winners were already trailing to Msakni’s strike from distance two minutes after the restart, with the ball squirming through Maduka Okoye’s grasp.There was no way back for them with Tunisia advancing to a quarter-final date with Burkina Faso.FULL-TIME! ⏰ #TeamNigeria 0️⃣-1️⃣...
SOCCER・2 DAYS AGO

Brentford have upped their offer for Nottingham Forest's Brennan Johnson, amid an expected move from Newcastle United.The 20-year-old attacking midfielder has become one of the most pursued young players in the Championship, and sparkled in Forest's push for promotion. Johnson has six goals in 28 league games, and the feeling is naturally that he is more than ready for the Premier League, and can prove a difference in a relegation battle.The situation is complicated since any sale this January would disrupt Forest's promotion ambitions, but the fact his contract runs out in 2023 means the Championship club would likely have...
PREMIER LEAGUE・16 HOURS AGO
San Diego Union-Tribune

Is Crystal Palace vs Liverpool on TV tonight? Kick-off time, channel and how to watch Premier League fixture

Following Chelsea’s draw with Brighton in midweek, Liverpool now look like the only team who have a chance of stopping Manchester City from claiming a fourth Premier League title in five years.Jurgen Klopp’s side are having to deal with a busy set of fixtures at a time when they are without both Mohamed Salah and Sadio Mane.FOLLOW LIVE: Team news and all the action as Crystal Palace host LiverpoolLast season the obliterated Crystal Palace 7-0 at Selhurst Park and will be looking for a similar performance on Sunday afternoon.Meanwhile, Patrick Vieira’s team have dropped into the bottom half following a...
PREMIER LEAGUE・2 DAYS AGO
The Independent

In a pivotal week, Premier League clubs are looking to push through deals as the transfer window shuts.Tottenham look keen to make moves with Antonio Conte not hiding his dissatisfaction as the club’s inability to strengthen yet, with Dele Alli and Giovani lo Celso both likely to be pushed out the door after being left out of the squad for the 2-0 defeat to Chelsea. While Arsenal are also in the market for a striker, with Fiorentina’s Dusan Vlahovic top of their list, though Juventus may move should it emerge that the Viola cannot hold on to the Serbian forward...
PREMIER LEAGUE・1 DAY AGO