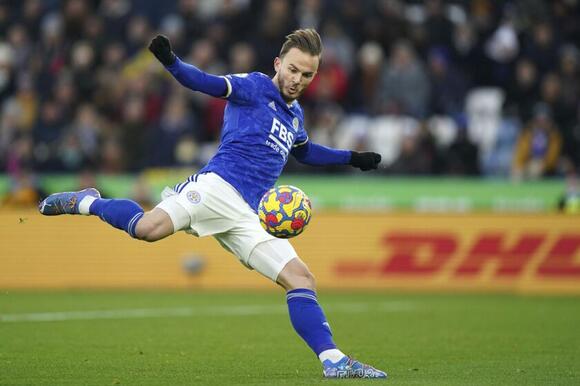 James Maddison inspired Leicester to a 4-2 win over Watford in the Premier League to ruin Claudio Ranieri’s return on Sunday.

The England international grabbed a goal and provided two assists for Jamie Vardy as the Foxes closed the gap to the top six amid blizzard conditions.

Ranieri was axed by Leicester in 2017, nine months after winning the title in a season that is unlikely to be repeated. The Watford manager received a standing ovation from Leicester fans but, aside from Joshua King and Emmanuel Dennis’ goals, that was as good as it got for the 70-year-old Italian.

Watford gifted the hosts a 16th-minute lead. Jonny Evans launched a harmless ball forward that should have been comfortable for William Ekong to deal with but the defender ducked underneath expecting goalkeeper Daniel Bachmann to collect. Ekong had not seen Maddison stealing in behind him and the midfielder seized the chance by finding the corner of the net.

Wilfred Ndidi’s reckless trip on Dennis gave referee Andrew Madley little option and King's penalty beat Kasper Schmeichel for his fifth goal of the season to make it 1-1 in the 30th.

Four minutes later, Maddison clipped an exquisite pass over the top for Vardy, who lifted the ball over an advancing Bachmann from an angle. The former England striker made it 3-1 in the 42nd when he again combined with Maddison to glance in his corner.

As the snow got worse so did Leicester’s defending and Watford grasped a lifeline when Dennis robbed Timothy Castagne to dink the ball over Schmeichel.

But it was another false dawn as Lookman added a fourth for the Foxes, tapping in Harvey Barnes’ cross soon after.

Watford boss Claudio Ranieri was happy with their 1-1 draw against Newcastle. João Pedro's late header brought Watford back on level terms in a competitive afternoon in the North East, after Allan Saint-Maximin opened the scoring in the second half. “I am satisfied, but I want more from my...
PREMIER LEAGUE・2 DAYS AGO
San Diego Union-Tribune

Claudio Ranieri has told his Watford players to roll up their sleeves and be prepared for a “battle” against relegation rivals Burnley. The Hornets lie a point and a place above the Premier League relegation zone following Saturday’s dramatic 1-1 draw at Newcastle. Burnley have slipped to...
PREMIER LEAGUE・1 DAY AGO
Tribal Football

Watford boss Ranieri: Look for me, Joao Pedro is a crack

Watford boss Claudio Ranieri is delighted with the form of Joao Pedro. The 20-year-old has begun to find his feet under Ranieri and he scored a late equaliser on Saturday to earn Watford a point at Newcastle. Ranieri, speaking ahead of Tuesday's crunch game with Burnley, has been impressed with...
PREMIER LEAGUE・1 DAY AGO

Claudio Ranieri insists he is 'satisfied' with his Watford team after they snatched a last-gasp equaliser against relegation rivals Newcastle United, but he wants to see more from his players going ahead. Joao Pedro's 88th minute header ensured The Hornets left Tyneside with a point, a goal that keeps them...
PREMIER LEAGUE・1 DAY AGO
The Independent

Newcastle boss Eddie Howe is refusing to throw in the towel after seeing his side squander two priceless points in their quest for Premier League survival.Allan Saint-Maximin’s second-half strike had taken the Magpies to within three minutes of just their second win of the campaign, which would have lifted them out of the bottom three, but they succumbed to Joao Pedro’s late equaliser as Watford snatched a 1-1 draw to leave them still deep in trouble.However, Howe said: “We saw today as a huge opportunity and that’s why it hurts so much. We were really pleased with what we saw...
PREMIER LEAGUE・2 DAYS AGO
The Independent

Joao Pedro snatched a priceless victory from Newcastle’s grasp as Watford struck late to deny them a foothold in the fight for Premier League survival.The Portuguese frontman headed the Hornets level three minutes from time to stun the locals among a crowd of 52,223 at St James’ Park and claim a 1-1 draw.Eddie Howe’s men, who had £25million signing Chris Wood among their number for the first time, looked to have won it through Allan Saint-Maximin’s superb 49th-minute strike, but they retreated as the visitors sought a way back into the game and ultimately were made to pay for their...
PREMIER LEAGUE・2 DAYS AGO

Burnley have made an application to the Premier League to postpone Tuesday’s fixture against Watford due to a “high number” of injuries and Covid-19 cases in their first-team squad. The Premier League said they will meet later on Monday to review the club’s request. The fixture at Turf Moor was previously postponed in December and Sean Dyche’s side have only played 17 matches so far this season, fewer than any other club. Saturday’s home match against Leicester became their fourth fixture to be be postponed due to Covid cases and injuries while a fifth, against Tottenham, was called off due...
PREMIER LEAGUE・20 HOURS AGO
The Independent

Burnley manager Sean Dyche revealed only 10 first-team players took part in training on Monday before the club applied for Tuesday’s Premier League fixture against Watford to be postponed.Dyche said the relegation-threatened club were in a worse position than they had been before the Premier League agreed to call off Saturday’s match against Leicester, with Charlie Taylor having taking a knock in training to add to the list of absentees.“We’re at such a stretched moment in time that it’s very difficult all round,” Dyche said.Burnley Football Club can confirm it has made an application to the Premier League for the...
PREMIER LEAGUE・23 HOURS AGO
The Independent

The theme pre-match had extended to the focus in the aftermath of an exacting 3-0 victory over Brentford, which catapulted Liverpool above Chelsea and loosely within reach of Manchester City at the Premier League summit.Just as, ahead of the encounter, he referenced the external din over the absence of Mohamed Salah and Sadio Mane due to the African Cup of Nations, Liverpool manager Jurgen Klopp circled it in his post-match briefing. The anaemic attack during the goalless draw against 10-man Arsenal in the first-leg of the Carabao Cup semi-final raised obvious concerns, slightly lifted by contributions in front of the...
PREMIER LEAGUE・1 DAY AGO

Chelsea scooped three individual prizes at the Best FIFA Football Awards, with Thomas Tuchel Emma Hayes and Edouard Mendy all winning their categories.Tuchel and Hayes were named men’s and women’s coach of the year respectively, while Mendy won the men’s goalkeeper award.Bayern Munich’s Robert Lewandowski won the men’s player award for the second year running and Barcelona midfielder Alexia Putellas was named women’s player of the year.🚨🏆 Thomas Tuchel is the #TheBest FIFA Men’s Coach 2021!🔵🧠 He had a year to remember with @ChelseaFC! pic.twitter.com/skVgbZTxCO— FIFA World Cup (@FIFAWorldCup) January 17, 2022Tuchel, rewarded for steering Chelsea to Champions League...
PREMIER LEAGUE・19 HOURS AGO
The Independent

Cristiano Ronaldo and Lionel Messi were both included in the men’s world XI team of the year alongside Erling Haaland and Robert Lewandowski – winner of the men’s individual prize – in a front four.Fifpro’s 2021 team crowbarred in the attacking quartet, with a back three of Manchester City’s Ruben Dias alongside Bayern Munich’s David Alaba and Euro 2020 winner Leonardo Bonucci. Dias’s City teammate Kevin De Bruyne was named in midfield alongside Jorginho and N’Golo Kante. Meanwhile Barcelona players were surprisingly omitted from the women’s team, despite Barca and Spain midfielder Alexia Putellas winning the women’s player of the...
FIFA・20 HOURS AGO
San Diego Union-Tribune

Wolves survived a late Southampton fightback to maintain their European push.Raul Jimenez’s penalty, Conor Coady’s first Molineux goal for six years and Adama Traore’s injury-time effort earned a 3-1 win.James Ward-Prowse’s stunning free-kick pulled a goal back for the Saints and Romain Perraud hit the bar just before Traore sealed victory for the hosts.Bruno Lage’s side were not at their vibrant best but it was enough to squeeze past the Saints to sit eighth in the Premier League.They are just two points adrift of the top six while mid-table Southampton slipped to a seventh defeat of the season.There was little...
PREMIER LEAGUE・2 DAYS AGO
goal.com

It was inevitable that Everton would sack Rafa Benitez. In theory he was a good appointment. The reality was different. The 61-year-old has the sort of obsessive nature and organisational talents needed to untangle a club in a mess. Just not this club.Almost no one wanted him. Not the owner, not the board, not the fans. Alisher Usmanov, the main sponsor and business associate of Farhad Moshiri, was the Spaniard’s biggest advocate. Moshiri, the man with his name over Goodison’s front door, was always dubious.Benitez had committed just about the worst crime in the eyes of the Gwladys Street. He...
SOCCER・1 DAY AGO