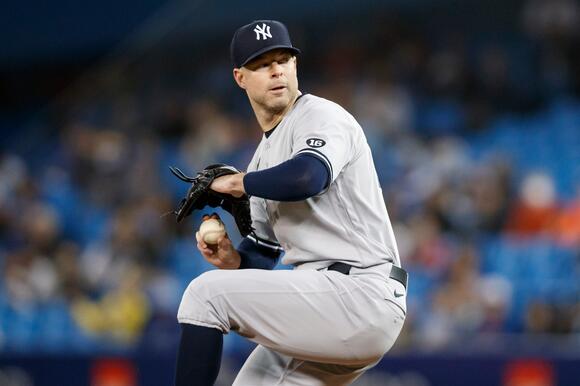 Corey Kluber is headed to one of the Yankees’ division rivals, reportedly signing a one-year deal with the Tampa Bay Rays, according to Ken Rosenthal.

The deal has a base salary of $8 million, per the New York Post’s Joel Sherman, with Marc Topkin of the Tampa Bay Times reporting that the deal could be worth up to $13 million if Kluber hits every incentive in the contract.

Kluber, 35, signed a one-year, $11 million deal with the Yankees last season after a workout at Eric Cressey’s facility, and he went 5-3 with a 3.83 ERA in 80 innings over 16 starts. He did throw a no-hitter in Texas in May, but left his next start after three innings with shoulder tightness and ended up missing three months with a right shoulder strain.

The righty struggled down the stretch after returning, posting a 5.40 ERA in his final six starts, and he completed six innings just five times in 18 starts.

Kluber was one of the most dominant pitchers in baseball in his nine seasons in Cleveland, posting a 3.16 ERA and winning two AL Cy Young Awards, but he made just seven starts in 2019 after suffering a broken forearm and then a lat strain during his rehab, and he threw just one inning for Texas in 2020 before being lost for the year with a shoulder injury.

The Rays were one of the teams in on Kluber prior to last season, as well, before he signed with New York.

The futures odds are out for the 2022 World Series, and while a lot can change as the MLB lockout rolls on and eventually gets resolved, the Yankees and Mets are both, as of now, among the favorites.
MLB・1 DAY AGO
Sports Illustrated

The Astros, Rays, White Sox, Red Sox and Yankees have to shore up these weaknesses to return to the postseason in 2022.
MLB・1 DAY AGO
newstalkflorida.com

We continue our series on hypothetical trades that have been proposed by fans while the Major League Baseball lockout continues. In this installment, we take a look at a trade that could be fair for both the Cincinnati Reds and the Tampa Bay Rays. Would this fan-proposed trade between the...
MLB・1 DAY AGO
WFAN Sports Radio

The Yankees and Mets each have three entries on Baseball America’s Top 100 list, which was released on Wednesday morning with Anthony Volpe cracking the top 10.
MLB・2 HOURS AGO
WEEI Sports Radio

Jonathan Papelbon joined Rob Bradford on the Live BP podcast to make it clear he has no intention of following in the footsteps of his former teammate Jon Lester, saying he will never announce his retirement.
MLB・2 DAYS AGO

Despite 609 career home runs and seven All-Star appearances, the former Cubs slugger hasn't come close to being elected in his nine years.
MLB・2 DAYS AGO
Inside The Phillies

Ranger Suárez's success in 2021 doesn't appear to be an anomaly, so the Phillies must exploit that. If they want make the playoffs in 2022, the starting rotation will need to rely heavily on Suárez.
NFL・21 HOURS AGO
Audacy

Greg Maddux recalls the shocking twist that led him to sign with the Atlanta Braves over the New York Yankees during his free agency in 1992.
MLB・21 HOURS AGO
Inside The Dodgers

The former Dodgers slugger was a fresh of breath air for the Atlanta Braves.
MLB・19 HOURS AGO

The 2021 Phillies were a top heavy team, both in terms of production and salary. Given that level of top talent, which players from last year's team have a shot at reaching Cooperstown?
MLB・1 DAY AGO

The Dodgers agreed to a minor league deal with the hard throwing Matusda.
MLB・1 DAY AGO
Inside The Dodgers

The middle of January traditionally signals the changing of the seasons in Chicago, a time to wash away the gloom of another Bears disaster and start thinking warm thoughts. In most years, the sidewalks are caked in ice, another polar vortex is plunging down from the Arctic and the Cubs and White Sox are holding their annual fan fests at a downtown hotel, celebrating the past while hyping the ...
NFL・2 DAYS AGO
Inside The Blue Jays