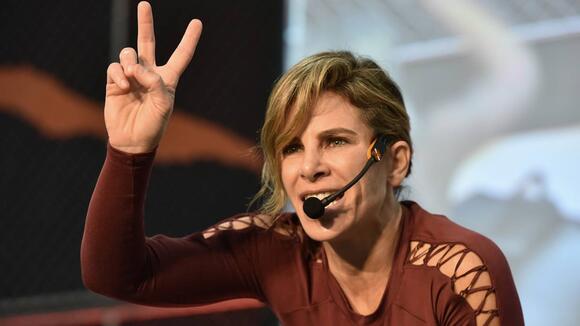 Jillian Michaels is engaged to partner DeShanna Marie Minuto, the fitness icon revealed in a social media post on Sunday.

According to People magazine, the personal trainer took to Instagram to announce the news, sharing a photo of the happy couple and Minuto’s engagement ring.

In 2018, Michaels, who has appeared in numerous fitness videos, “The Biggest Loser” and her own reality TV show, “Just Jillian,” announced her split from then-fiancée Heidi Rhoades, according to E! News. The pair share a daughter, 11-year-old Lukensia, and a 9-year-old son, Phoenix, People reported.

Jillian Michaels hits back after ex Jackie Warner claimed she 'used to spit on people' at restaurants: 'You've got to do better'

Jillian Michaels has responded to claims that she used to 'spit on people' at restaurants. The 47-year-old personal trainer took to her Instagram on Friday to address the allegations made by ex Jackie Warner. Warner, 53, made the comments about her ex Michaels on a recent episode of the Hot...
CELEBRITIES・11 DAYS AGO
Hello Magazine

Michael Strahan took to social media to celebrate a special family occasion on Sunday with a series of rare photographs. The Good Morning America host commemorated his mother's birthday with several family pictures that featured the two of them. The sweet shots saw him pose happily alongside his mother, along...
CELEBRITIES・2 DAYS AGO
Popculture

Jillian Michaels is responding to ex Jackie Warner's claims she "used to spit on people" in restaurants when they were dating during the '90s. The Biggest Loser alum alleged on the Hot Takes & Deep Dives with Jess Rothschild podcast Monday that she and Michaels would get "thrown out" of restaurants because her ex was "screaming loud" and "cursing," which eventually led to the end of their relationship.
CELEBRITIES・11 DAYS AGO
Radar Online.com

Jillian Michaels' ex-girlfriend, Jackie Warner, is spilling major tea about the Biggest Loser alum's alleged disturbing behavior that left the latter kicking her butt to the curb. Article continues below advertisement. Warner spoke out, claiming Michaels' used to "spit" on people and would often get "thrown out" of restaurants for...
CELEBRITIES・12 DAYS AGO

Josh Duhamel is engaged to model Audra Mari, the actor announced on social media. According to People magazine and E! News, the 49-year-old “Transformers” star took to Instagram on Saturday to share the news. “It’s on!! She found a message in a bottle that washed ashore and said...
CELEBRITIES・9 DAYS AGO
KTLA

Jillian Michaels talked about her recent move to Miami. She also talked about her fitness app, which she describes as a one-stop shop for all wellness needs. You can find and download “The Fitness App by Jillian Michaels” on Google Play or the App Store. For more information, visit her website at JillianMichaels.com. This segment […]
MIAMI, FL・7 DAYS AGO
WWE

WWE correspondent Sarah Schreiber took to Instagram on Wednesday to announce that she is now happily engaged!. Congratulations to Sarah, her forever buddy, "Mr. Chad," and to the adorable puppy, of course, on the great news.
CELEBRITIES・13 DAYS AGO
The US Sun

Who is still together from Married at First Sight season 13?

Head inside for some awesome throwbacks and more recent shots, as we wish the icon a blessed day.
CELEBRITIES・5 DAYS AGO
enstarz.com

Kim Kardashian In Hot Water, Gets Blocked By Instagram Followers After Posting THIS

After posting a spoiler for the highly awaited film "Spider-Man: No Way Home" on her Instagram feed, Kim Kardashian has received a lot of flak. The KKW Beauty entrepreneur tweeted two photos from the film's conclusion, which she had been viewing at home. WARNING: SPOILERS AHEAD. Former "Spiderman" stars Tobey...
CELEBRITIES・21 DAYS AGO
HelloBeautiful

Missy Elliot Pens A Heartfelt Instagram Message In Honor Of Aaliyah’s Birthday: ‘Your Spirit Lives On’

Missy Elliot took to Instagram to share a touching message in honor of Aaliyah on what would have been the late singer's 43rd birthday.
CELEBRITIES・2 DAYS AGO
shefinds

Ben Affleck and Jennifer Lopez are the couple we never knew we needed this year! Although they are 2021 couple goals and appear to be living their best lives right now, things weren’t always so peachy with the former exes who initially dated between 2000 and 2004! If you always wanted to know more details about their widely-publicized split and why they called off their engagement just days before their wedding in 2004 then you’re in luck, as the 49-year-old The Last Duel actor just revealed the real reason for them going their separate ways 17 years ago!
CELEBRITIES・22 DAYS AGO

More Bravo babies in 2022! There’s no doubt that there was a bravo baby boom in 2021 but how about this year? Shahs of Sunset star Lilly Ghalichi is here to kick things off. As reported by Us Weekly, Lilly is pregnant with her second child with husband Dara Mir. Lilly made the announcement by posting […] The post Former Shahs Of Sunset Star Lilly Ghalichi Is Pregnant With Second Child appeared first on Reality Tea.
CELEBRITIES・1 DAY AGO
The US Sun

WENDY Williams can’t dress herself without help and doesn’t even recognize her own friends at times, The Sun can reveal in a heartbreaking update on the star's health. Sources said the once witty, sharp host of The Wendy Williams Show isn't the same as she used to be as she battles multiple medical problems.
CELEBRITIES・23 HOURS AGO
Deadline

Yvette Mimieux Dies: Actress-Writer Who Starred In ‘The Time Machine’ Had Just Turned 80

Yvette Mimieux was found dead Tuesday morning, a rep for her family confirmed. She had just turned 80 on January 8, and she passed away in her sleep of natural causes. Mimieux was a prolific actress best remembered for starring opposite Rod Taylor in the 1960 George Pal-directed film version of the H.G. Wells novel The Time Machine at MGM, where she was soon put under a long-term contract. Another big hit came months after in Where the Boys Are. Among her other credits around that time were Platinum High School, Mr. Lucky, Four Horsemen of the Apocalypse and Light in the...
CELEBRITIES・15 HOURS AGO
Health Digest

Comedian and actor Louie Anderson is currently seeking treatment for cancer. Here's what you should know.
CANCER・16 HOURS AGO
Ok Magazine

Janelle Brown has been reflecting on her relationship with Kody Brown. In the latest episode of Sister Wives, Janelle spoke to Robyn about the growing tension in the family, as they've been clashing over Kody's strict guidelines amid the COVID-19 pandemic. Robyn admitted to Janelle during the Sunday, January 16,...
RELATIONSHIPS・2 DAYS AGO
EW.com

Jordan Cashmyer, who appeared in season 5 of the MTV reality series 16 and Pregnant as a young mother who battled homelessness, has died in Maryland, her mother Jessica confirmed on Sunday. She was 26. A cause of death has not been shared. "Last night I received a call no...
MARYLAND STATE・2 DAYS AGO
Los Angeles Times

"I asked for the opportunity. I was told no," CNN legal analyst Laura Coates said after Alex Trebek recommended she host "Jeopardy!"
LOS ANGELES, CA・19 HOURS AGO
The Independent

The $54m king of YouTube who makes more money than Jay-Z: How MrBeast won the internet

One day in January 2017, 18-year-old Jimmy Donaldson from North Carolina sat down in front of a camera and began counting to 100,000. Over the next forty hours, he went from chipper and alert to exhausted, leaning back in his chair, eyes closed, sometimes rocking back and forth, his numbers slurring into each other. Text labels on screen read "KILL ME" and "I regret this". Finally he made it to the end, allowing himself the briefest of celebrations before collapsing backwards: "What am I doing with my life?"The gruelling count turned out to be Mr Donaldson's big break. Since posting...
BEHIND VIRAL VIDEOS・2 DAYS AGO