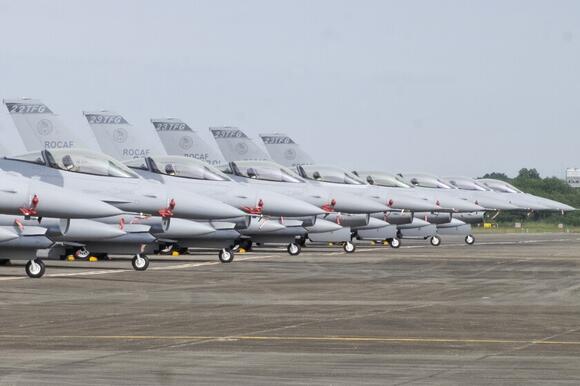 Taiwan said 27 Chinese aircraft entered its air defense buffer zone on Sunday, the latest in a long series of incursions as part of Beijing's pressure on the self-ruled island.

The Defense Ministry said Taiwan scrambled combat aircraft to “warn” the Chinese planes to leave. It also deployed missile systems to monitor them.

The Chinese aircraft flew into Taiwan’s air defense identification zone near the southern part of the island and out into the Pacific Ocean before returning to China, according to a map by Taiwan authorities.

Over the past year, the frequency of Chinese incursions has increased, with about 150 aircraft over a period of four days.

China’s air force mission toward Taiwan came as Chinese President Xi Jinping met with officers at a military conference, where he called for military talent cultivation to support and strengthen the armed forces, according to state-owned news agency Xinhua.

Xi said that talent is imperative in achieving victory in military competition and gaining the upper hand in future wars, according to Xinhua.

China claims democratically ruled Taiwan as its own territory, to be brought under its control by force if necessary. It refuses to recognize the island’s government and has increasingly sought to isolate the independence-leaning administration of President Tsai Ing-wen.

Taiwan and China split during a civil war in 1949, and Beijing opposes Taiwan’s involvement in international organizations.

China said Friday it gained support on issues including the treatment of Uyghur Muslims from a number of Persian Gulf states following talks between their foreign ministers at which they agreed to upgrade relations. Chinese Foreign Ministry spokesperson Wang Wenbin said the ministers and Gulf Cooperation Council Secretary-General Nayef Falah Al-Hajraf expressed firm support for China’s “legitimate positions on issues related to Taiwan, Xinjiang and human rights.” He said they “expressed opposition to interference in China’s internal affairs and politicization of human rights issues.” They also rejected the “politicization of sports and reaffirmed their support" for China’s hosting of...
CHINA・2 DAYS AGO
San Diego Union-Tribune

China Is Watching Ukraine With a Lot of Interest

As Joe Biden confronts Vladimir Putin about Russia’s military buildup along its border with Ukraine, another world leader is probably watching with keen interest. China’s Xi Jinping, too, has a geopolitical grievance in his neighborhood—in his case over Taiwan, the microchip-rich island that Beijing insists is and always should be part of China. Like Putin, who is eager to bring Ukraine back under Moscow’s control, Xi worries that a former chunk of his country’s empire is growing closer with the United States and its allies. How Xi interprets (or worse, misinterprets) the outcome of the Ukraine standoff could influence whether and how China tries to reunify with Taiwan, and thus has implications for the security and stability of East Asia.
POLITICS・3 DAYS AGO
San Diego Union-Tribune

China has given strong verbal backing to Kazakhstan's leader for his deadly crackdown to quell violent unrest, but stood aside as Russia sent in special forces troops
POLITICS・3 DAYS AGO

Between 2020 and 2021, Taiwan was listed as a province of China, but in 2022 diaries, references to the island disappeared altogether.
ECONOMY・2 DAYS AGO
The Independent

A review is to be held into how a suspected Chinese agent was able to get so close to senior British politicians, security minister Damian Hinds has said.MI5 has taken the rare step of circulating a warning to MPs that Christine Lee – a prominent London-based solicitor – has been engaged in “political interference activities” on behalf of China’s ruling communist regime.The Chinese Embassy rejected the claims, accusing the authorities of “smearing and intimidation” against the Chinese community in the UK, while a Chinese Foreign Ministry spokesman said the British are “too obsessed with James Bond 007 movies”.However, Mr Hinds...
POLITICS・2 DAYS AGO
San Diego Union-Tribune

South Korea long maintained "strategic ambiguity" in its relations with China and with the US. But that era is over, with the Moon Jae-in government quietly but surely siding with Washington. But while it is siding with the US in most areas, it is not about to cut all ties...
FOREIGN POLICY・5 DAYS AGO

The Biden administration sanctioned eight people and entities for their involvement in developing weapons of mass destruction and ballistic missile-related programs. The sanctions come on the heels of at least two known North Korean ballistic missile tests. Four of the North Korean nationals are based in China and two are...
MILITARY・4 DAYS AGO
Shore News Network

TAIPEI (Reuters) -Taiwan’s air force on Tuesday suspended combat training for its F-16 fleet after a recently upgraded model of the fighter jet crashed into the sea in the latest of a series of accidents. The defence ministry said the F-16V, the most advanced type in Taiwan’s fleet, went...
AEROSPACE & DEFENSE・5 DAYS AGO
goodmorningpost.com

CHIAYI, Taiwan (Reuters) – Taiwan air force jets screamed into the sky on Wednesday in a drill simulating a war scenario, showing its combat readiness amid heightened military tensions with China, which claims the island as its own. Before takeoff, flight crews at a base in the southern city...
AEROSPACE & DEFENSE・11 DAYS AGO

Beijing is just 2 weeks out from the Winter Olympics, but it's intensifying COVID-19 restrictions after detecting 1 Omicron case

While the Chinese capital hasn't gone into full lockdown mode, all inbound travelers will be required to take a COVID-19 test within 72 hours of arrival.
SPORTS・20 MINUTES AGO
Reuters

Why Japan is betting on railguns for missile defense

An electromagnetic railgun setup in the US in 2017. U.S. Navy photo / John F. WilliamsRailguns are a fascinating type of weapon that can fire a projectile very quickly, although the US recently stopped working on them.
MILITARY・4 DAYS AGO
San Diego Union-Tribune