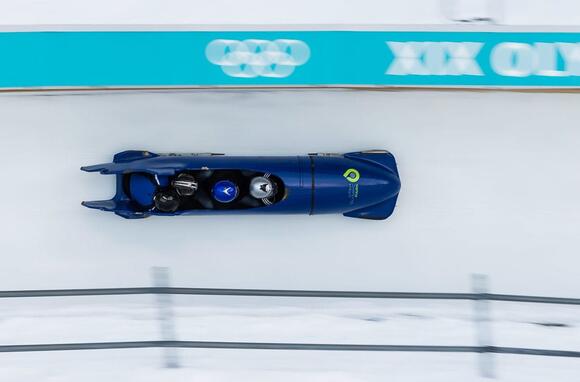 PARK CITY, Utah — The Utah Olympic Park (UOP) began the new winter season of public bobsled ride offerings on Friday evening to a sold-out session. Last night was the second consecutive sold-out night with all 20 of the spots spoken for. Designed, for the most part, to occur after the ski resorts close for the day, visitors to Park City have taken advantage of the public bobsled program since the track first opened. More nights than not, sold-out is the status quo in years past.

Lake Placid, NY is the only other place members of the public can take such a ride in this country and they’d have to be in Vancouver, Canada to ride the third one in North America. It’s a ride whereby three people, over the age of 16, purchase individual tickets to be passengers in a four-person sled driven by a professional pilot.

While riders get bragging rights saying that they took a trip down an actual Olympic track, a track on which, minutes prior to the start of their session is hosting, this week, an Intercontinental Cup race, the sleds themselves have been modified with enhanced safety features over the sleds they may have seen on TV in any given fourth February.

Slowly stepping into a stationary sled replaces the sprinting start scene seen at Games-time. A waiver, an orientation, a helmet, a photo op, and a push are all administered by the employees of the UOP leaving the only thing for riders to do is hang on and have fun.

1996 saw then Governor Leavitt as one of the very first ones down the track in a public bobsled. He was the first one to publically declare that eating dinner after the ride, not before, wasn’t a bad idea. Other VIPs, especially during the annual, Sundance Film Festival suddenly get excited about whether they gained or last fractions of a second as they speed down the iced track pulling Gs for likely the first and maybe the last time in their lives. However, VIPs must get in line like everyone else who wants to sign up for the finite slots.

Likened to a bungee jump, a Formula 1 hot lap or sky diving, this Olympic-like adrenaline-junkie experience isn’t for everyone but with the holidays comes, each year, a certain number of locals and visitors alike gifting a ride to a loved one as a special and most-memorable present. Precisely in an Olympic winter like this one, corporate parties buy out the whole session just for a chance to be part of all the action, even half a world away. That is when commercials aren’t being filmed there.

As a United States Olympic and Paralympic Training Center, the UOP’s mission has always been to nurture elite athleticism, but it also always carves out spaces to let regular folks share in on the fun.

Public bobsled riders must weigh a minimum of 100 lbs. for an opportunity to book a spot for $195 for the less-than-a-minute ride.

Booking a spot can be done here.

DENVER — The sight can be jarring during extreme drought: snowmaking guns lined up on a mountainside, blasting precious crystal flakes on a ski run while the rest of the […]
LIFESTYLE・13 HOURS AGO
TownLift

Park City knows how to après

PARK CITY, Utah – Winter sports enthusiasts from across the country and all over the globe travel to Park City for its skiing. Is it truly a ski day if […]
PARK CITY, UT・6 DAYS AGO
TownLift

DEER VALLEY, Utah — For the ninth year in a row, at the World Ski Awards, the winner of the United States of America’s Best Ski Resort for 2021 was Deer […]
PARK CITY, UT・7 DAYS AGO
TownLift

ALTA, Utah — Alta Ski Area is planning to replace the Sunnyside lift with a new, six-pack detachable lift during the summer of 2022, according to documents filed with the […]
SUNNYSIDE, UT・6 DAYS AGO

PARK CITY, Utah — The Utah Division of Wildlife Resources (DWR) recently released a mountain lion that had to be tranquilized on Jan. 3 on Crestline Dr. in the Park […]
PARK CITY, UT・6 DAYS AGO
TownLift

PARK CITY, Utah — The author of a viral petition with over 40,000 signatures that criticized the management of Vail Resorts-owned Stevens Pass Ski Resort in Washington is now calling […]
PARK CITY, UT・7 DAYS AGO
TownLift

PARK CITY, Utah — Vail Resorts reported ski season metrics from the beginning of the ski season through Jan. 2 on Friday, with the data showing total skier visits down 1.7% […]
PARK CITY, UT・8 DAYS AGO

These snowpersons were taking in the view from the Redstone area in Kimball Jct. yesterday. They seemed to be warming up for Valentine’s Day by holding branch hands. Submit photographs […]
PARK CITY, UT・6 DAYS AGO
TownLift

PARK CITY, Utah – Melanie Webb, founder of WebbWell, has over 20 years of experience leading people to healthier lives through fitness. In 2019, she published “Adventures in Mother Nature’s […]
PARK CITY, UT・6 DAYS AGO
TownLift

The people in the hot air balloon may be letting this weekend fly by, but they wouldn’t have it any other way. They’re getting a rare birds-eye-view of the rare […]
PARK CITY, UT・9 DAYS AGO
TownLift

PARK CITY, Utah — Since January 8, officers with the Utah Division of Wildlife Resources (DWR) have relocated over a dozen moose, most of which were found wandering near Interstate […]
PARK CITY, UT・7 DAYS AGO
TownLift

PARK CITY, Utah — A woman was skiing with her husband at Canyons Village last week when she saw a moose running up the Echo run near the Super Condor […]
PARK CITY, UT・8 DAYS AGO
TownLift

ST. GEORGE, Utah — The U.S. Bureau of Reclamation announced last week that it plans to adjust management protocols for the Colorado River in early 2022 to reduce monthly releases […]
SCIENCE・8 DAYS AGO
TownLift

PARK CITY, Utah — An adolescent bobcat decided to visit the National Ability Center on Wednesday in Round Valley. “Benefits of an office so close to nature? The occasional WILD […]
PARK CITY, UT・12 DAYS AGO
TownLift