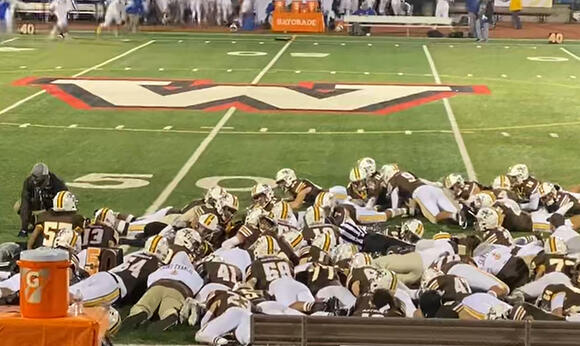 CAMPBELL (CBS SF) — When the 10 shots first rang out, many of the thousands of fans and players didn’t hear them over the roar of excitement from a touchdown that just had been scored at Friday night’s CCS Division 1 championship game between St. Francis and Serra high schools.

But moments later there was fear, panic and chaos.

“We just started to run and get under cover and get behind some tents that we were under,” said Serra High head coach Patrick Walsh. “It was a chaotic scene. It was scary.”

Penelope Correa was a student caught up in the rush for cover.

Two men suffered non-life-threatening injuries in the shooting that took place in the parking lot of Campbell’s Westmont High, the neutral site chosen to host the game.

Investigators have not released any information about the suspects or if the shooting was even related to the game.

But nerves remained raw hours after the contest.

“There’s no playbook for this,” Walsh said. “There’s certain plays that we ended up executing that night. But certainly, this was not something that anyone was prepared for.”

According to the news reports, more than 5,000 tickets were sold for the game between the WCAL rivals. Serra had just gone up 16-12 with 2:18 remaining in the game when the sound of shots rang out.

In the stands, fans froze for a moment. Sierra players rushed off the field, St. Francis players dove to the ground for cover.

“All the fans started pouring out,” said Matt Halmo, who was attending the game to cheer on Saint Francis. “And everyone was scared there would be a stampede. And that was the point where everyone got really nervous. We didn’t know what was going on. Because all the reports were there was someone shooting in the stadium.”

“We had people yelling ‘don’t stampede, don’t run,'” Halmo added. “A lot of people stood up and controlled the crowd, which was great.”

“Nothing really prepares you (for something like that) until you are in the throes of it,” CCS commissioner Dave Grissom told the paper. “It took a while for us to find out if it was an active shooter … (or) if it was fireworks, firecrackers.”

CCS officials resumed the game at 9:36 p.m. after police gave the all-clear. Serra won by the 16-12 margin.

Just the tip of the iceberg- when you disparage law enforcement and you don't prosecute crimes you will inevitably get more lawlessness.

A stunning development has entered the mix in the Caleb Williams sweepstakes, according to a new report. It was previously believed USC was far and away the favorite to land the former Oklahoma quarterback. Then LSU reportedly entered the fray. Now, it’s a Big Ten team’s turn to try and land the five-star transfer.
COLLEGE SPORTS・1 DAY AGO
FanSided

Ohio State Football foe could get number one transfer QB

The transfer portal has been good for the Ohio State football program. It has been useful for other teams around the country too, including in the Big Ten. It looks like the Buckeyes might have some tougher competition next year because of one particular player in the transfer portal. It...
COLLEGE SPORTS・23 HOURS AGO
The Clemson Insider

Clemson made the cut Monday for a top linebacker prospect in the 2023 class, who is the brother of a current Tiger defender. St. Joseph's Prep School (Philadelphia, Pa.) four-star Josiah Trotter announced a (...)
CLEMSON, SC・2 DAYS AGO
Sportsnaut

The Pac-12 fined Arizona State head coach Bobby Hurley $20,000 and suspended him for Monday’s game against Southern California. The
ARIZONA STATE・2 DAYS AGO

After spending over a decade in the NFL, tight end Lee Smith has officially announced his retirement. Smith explained his decision in a heartfelt video released by the Atlanta Falcons, the last team he suited up for in the pros. In his announcement video, Smith revealed that he’s going to...
NFL・1 DAY AGO
The State

There is another football coaching job opening in the Midlands. Dreher coach Treigh Sullivan has stepped down after nine seasons as head coach. The Blue Devils went 2-6 this season and missed the playoffs for the third straight year. Dreher made it to the playoffs in Sullivan’s first six seasons...
HIGH SCHOOL・2 DAYS AGO
CBS San Francisco

SANTA CLARA (CBS SF) — San Francisco 49ers coach Kyle Shanahan knows the inspiration his team draws from their faithful fanbase no matter where they play. In sports terms — 49ers fans travel well. So thousands will make the trek to Southern California for Sunday’s NFC Championship Game showdown against the rival Los Angeles Rams. “It’s so awesome, the (49ers) faithful blow my mind everywhere we go,” Shanahan said after Saturday’s playoff win in frigid Green Bay. “The coolest thing I ever saw was in New Orleans in 2019 (for the Super Bowl) when they took over Bourbon Street, what they did...
NFL・2 DAYS AGO
AllBruins

A return to the Final Four and beyond is on the table for the Bruins now that they've proved to be among the best in the nation.
LOS ANGELES, CA・14 HOURS AGO

Two months before the pandemic shut down in 2020, the 46th Charlie Wedemeyer Santa Clara County all-star high school football game unfolded in a new spot on the calendar. The annual summer showcase moved to winter. The South won 33-14 in January 2020 to run its record to 24-18-4 in...
LOS GATOS, CA・1 DAY AGO
Journal-News

Hamilton football will have a new coach next season. HHS director of athletics Missy Harvey confirmed Nate Mahon has stepped down. “Nate Mahon made the decision to not return as our varsity football coach,” Harvey wrote in an email. “The district thanks Coach Mahon for his three years at the helm and wishes him the best of luck in his future endeavors.”
HAMILTON, OH・17 HOURS AGO
Akron Beacon Journal

Wadsworth gets revenge after Hudson girls basketball shuts down Twinsburg

Defense wins basketball games and Hudson was on both ends of that equation in recent league action. After posting a big victory over Wadsworth earlier in the season, the Lady Explorers lost 49-32 at Wadsworth Wednesday as a woeful fourth quarter period proved costly. ...
WADSWORTH, OH・10 MINUTES AGO
The Spun

One of the more popular traditions in all of sports is set to return as March nears its arrival; with it, comes the NCAA Tournament and prediction-filled brackets. That means time is of the essence for the Michigan Wolverines, who reside in Joe Lunardi’s “first four out" bracketology projection.
COLLEGE SPORTS・1 DAY AGO
Savannah Morning News

'Better than I could have imagined': Bryan County boys basketball enjoys winning season

PEMBROKE — When the horn sounded ending a recent Bryan County High win, Jamal Campbell raised both arms near midcourt and faced his boys basketball team with an ear-splitting grin. No one in the gym could begrudge Campbell the moment nor for his fellow juniors Jordan Flannel, Devontae Bowers, Kam Boggs and Cam Gusman. ...
BRYAN COUNTY, GA・14 MINUTES AGO
Journal Star

Not much more can be said about Katie Krupa. The Morton senior has pretty much done it all in her four-year varsity basketball career, helping the Potters to the 2019 Class 3A state championship, a 2020 runner-up finish and the inaugural Mid-Illini Conference Tournament crown last season. The Harvard signee...
2 MINUTES AGO
Spartanburg Herald-Journal

Gaffney quarterback Grayson Loftis: Why I committed to Duke football

Grayson Loftis had a plan all along to finish his recruiting process as early as possible. When the right offer came and he knew he'd found his next home, he wouldn't hesitate to make a commitment. The state championship-winning Gaffney quarterback — last year was his first with the Indians after transferring from Blue...
GAFFNEY, SC・11 MINUTES AGO
cruisinmaine.com

The Maine Principals’ Association is rescheduling the regional cheerleading championships scheduled for this weekend, because of the pending major storm. The competition originally scheduled for Saturday in Augusta and Bangor will now be next Saturday on Feb. 5. Class A North and South, Class B and C South will...
AUGUSTA, ME・13 HOURS AGO
HBCU Gameday

When the SWAC plays in Birmingham, games are expected to generate significant revenue as well as put the city at center stage in front of a crop of new visitors, fans, and national media. The post SWAC Classic coming to Birmingham’s Legion Field appeared first on HBCU Gameday.
BIRMINGHAM, AL・18 HOURS AGO
WOWK 13 News

LOS ANGELES (KPIX) — Many 49ers fans are heading to Los Angeles for the NFC Championship game against the Rams, but not all the fans wearing red and gold in the stands will be from the Bay Area. The number of home-grown LA area 49ers fans is exploding. “I wore my jersey to work today and my friend said, ‘You’re a 49ers fan?’ And I said, ‘Yep. What’s up?!'” said Annette, a 49ers fan and Los Angeles resident. KPIX connected with several members of the Saloon Squad, a Los Angeles-based 49ers booster club, as they prepare to root against the Rams. Many of the...
NFL・8 HOURS AGO