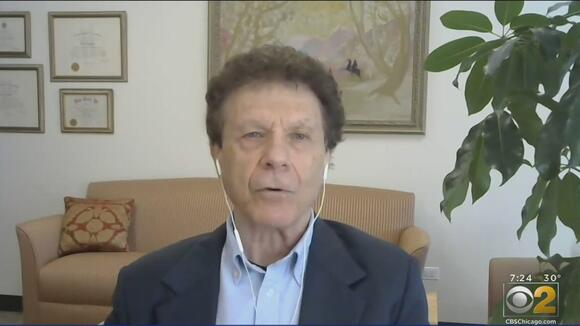 CHICAGO (CBS) – For more than 40 years, Chicagoan David Kronfeld has had an incredibly successful career in business. Now the Venture Capital investor and founder of JK&B Capital, is sharing his knowledge about business, in his new book titled, “Remarkable- Proven Insights To Accelerate Your Career.”

CBS 2’s Suzanne Le Mignot talked with him about “Insight” and why Kronfeld says it’s the key to career success.

When David Kronfeld came to America from Israel, he wanted to earn his bachelor’s degree in electrical engineering and master’s in computer science.  After graduation, he could understand English, but could barely speak it. When he went to work at EDS, the company once owned by Ross Perot, Kronfeld said he made mistakes. To succeed, he had to really observe everything around him, in particular, what worked for him and other people, in a corporate environment.

“That kind of observation, allowed me to become much more insightful than the average person, because I really had to analyze all of the nuances, behind every little thing,” Kronfeld said.

“Insight” is one of the key premises in the Chicagoan’s wall street journal bestseller list book, “Remarkable- Proven Insights To Accelerate Your Career.” Kronfeld is the chairman of JK&B Capital. The Venture Capital Group has raised more than a billion dollars and has invested in hundreds of companies.  Kronfeld explains “Insight” as the advice that helps you become a top performer and succeed against your peers.

“To me, insight refers to that street smarts. It’s the things that are not so obvious, but play a critical role when push comes to shove,” he said.

Kronfeld says he learned about the different levels of insight while working as a management consultant at Booz Allen Hamilton. He says insight involves everything from the dos and don’ts in a work environment, to techniques, that help you excel.

Kronfeld shares many personal stories in his book. It started as a family memoir, to share his business experience with his grandson’s Colton and Aaron. When his daughter Beth read what he had written, she knew his advice, was something that needed to be shared with the world.

“We decided that this is a good opportunity to give back and to have a much wider audience benefit from this kind of an insight,” Kronfeld said.

Kronfeld will be donating copies of his book to organizations, supporting young professionals, primarily those at a disadvantage in creating their dream careers. More information about his book can be found on his website .

HOUSTON — Catch Dave Ramsey at his free live streaming event, "Building Wealth In 2022, Thursday, January 13 at 7 pm. Register here. For more information on "Baby Steps Millionaires," log on to the Ramsey Solutions website. To learn Dave Ramsey's 7 Baby Steps to get out of debt,...
HOUSTON, TX・3 DAYS AGO
KATU.com

How to Have Career Success in 2022

January and February are traditionally the best months to reexamine your career direction, explore other options and possibilities, search for a new position, and even make a career change. However, in the new world of work, you have to think differently about your career if you want to get the career success you've always desired and deserved. Career Strategist and Personal Brand Expert Carol Parker Walsh, Ph.D., J.D., joined us to share three new approaches to career success that ensure you have your best career ever.
CAREER DEVELOPMENT & ADVICE・4 DAYS AGO
Business Insider

This article could easily be filled with 1 billion pieces of advice from the incredible African female billionaire, but we chose seven (7) of the best pieces of wisdom she has offered over the course of her career — here is some of the best advice from Folorunsho Alakija:
AFRICA・4 DAYS AGO
CNBC

The 3 best books to help you have a happier, more successful career in 2022, according to a career coach of 12 years

The right book has the power to spark inspiration, teach you something new or shift your perspective. Ask Susan Peppercorn: Throughout her 12 years as a career coach, she has continually sought the guidance of a few non-fiction books. "I absolutely love reading," she tells CNBC Make It. "But there are three titles that have really changed my life."
BOOKS & LITERATURE・6 DAYS AGO

'Know your brand' will lead to job offers, success in achieving career goals

I am often asked by team members, partners, employers and job seekers, “What is one of the most important components for success in getting the job you want and building a career path?” My response is always, “Know your brand!”. No, I’m not talking about the brand...
CAREER DEVELOPMENT & ADVICE・6 DAYS AGO
mibluesperspectives.com

Prepping for Success in the New Year

A new year is a perfect time to plan for the year ahead, create goals and identify habits we want to develop. Looking forward with anticipation can increase our feelings of happiness and writing down our goals make us more likely to accomplish them. Below are three ways you can prep for success in 2022.
10 DAYS AGO
Fortune

This is the web version of CFO Daily, a newsletter on the trends and individuals shaping corporate finance. Sign up to get it delivered free to your inbox. For many, the beginning of the year means setting new career goals. That could mean aspiring to advance in your current field or even choosing a new career path. I recently had a conversation with Visa Vice Chair and CFO Vasant Prabhu for Fortune’s series Career Rewind. Prabhu discussed his climb up the corporate ladder, including his current position at the global credit card and payments powerhouse. But finance, it turns out, wasn't initially on his radar.
BUSINESS・12 DAYS AGO
GOBankingRates

20 Genius Things Mark Cuban Says To Do With Your Money

You might have heard this billionaire's name, but who is Mark Cuban and how did he make his money? It's possible you know him as one of the sharks on the hit show "Shark Tank," but Cuban is more than...
ECONOMY・14 HOURS AGO

Who’s in, who’s out, who’s been promoted and hired — FN covers all the industry changes in one place. Know of an executive on the move? Tell us at web@footwearnews.com. Jan. 15, 2022: Neiman Marcus Group (NMG) has made two more senior leadership appointments. The luxury retail chain has tapped Amanda Martin as SVP, chief supply chain officer and will take over responsibility for all supply chain operations, including NMG’s multi-year supply chain transformation. In addition to this responsibility, Martin will oversee the retailer’s photo studio and customer care divisions. And, Vijay Karthik has been promoted to SVP, chief technology officer...
BUSINESS・16 HOURS AGO
GOBankingRates

The Pros and Cons of Continuing To Work Remotely Post-Pandemic

Work from home! Make money in your pajamas! Over a year into the pandemic, much of America's white-collar workforce that has been doing this long enough for it to feel normal may or may not still be...
PUBLIC HEALTH・1 DAY AGO
24/7 Wall St.

This Is the Best Company to Work for in America

A recent analysis reveals that employees think Nvidia is the best company to work for in the United States.
BUSINESS・1 DAY AGO
Interesting Engineering

Digital Literacy 101: A Guidemap to Becoming a Data Citizen

Discussions about how Facebook operates have been high on the agenda over the past week as the US Congress investigates the platform’s impact. At the core of these discussions are questions of how Facebook uses data that we, as users, generate. Similar questions can be asked of all the...
INTERNET・35 MINUTES AGO

Silicon Valley says kids over the age of 13 can handle the big, bad world of social media. Experts say that's the result of a 'problematic' 1990s internet law.

Experts told Insider that even if the law, COPPA, and the industry's age limit of 13 were raised, it wouldn't entirely ensure kids' safety online.
KIDS・1 DAY AGO
The Motley Fool

Is Google About to Accelerate Development of the Quantum Computing Industry?

Quantum computing isn't a great investment for the average investor -- yet.
SOFTWARE・1 DAY AGO
24/7 Wall St.

Here's a look at what the ARK Invest exchange-traded funds bought on January 14, 2022.
STOCKS・1 DAY AGO
The Independent

A bit of fresh air never hurt anyone, that’s what we say, and if you want to encourage your kids to go (and stay) outside, a climbing frame is ideal.They are great for building strength and imagination, as they can become pirate ships, dens and much more with a bit of creative thinking.When buying a climbing frame the most important consideration is space. Sizes can range from one square meter to “block-out-the-sun” big.Make sure to choose the area it will go in wisely, and allow for plenty of space around it for safety mats or swings.How we testedWe tested the...
KIDS・1 DAY AGO
GOBankingRates

In the latest episode of the Live Richer podcast, host Jaime Catmull talks to Deepak Chopra, founder of The Chopra Foundation, a non-profit entity for research on well-being and humanitarianism, and...
PERSONAL FINANCE・1 DAY AGO
CBS Chicago

CHICAGO (CBS) — What if we told you that there’s a place for your broken things that isn’t your trash can? A group of volunteers is asking you to bring it to them instead. CBS 2 Morning Insider Marissa Parra takes us to the Evanston Repair Café. They say one man’s trash is another man’s treasure, but at Evanston Repair Café, there’s no such thing as trash at all. “The impulse to throw something away after it breaks is rooted in the fear of asking for help,” said volunteer Liam Ouweleen. If there’s one place to feel safe asking for help with fixing, it’s...
EVANSTON, IL・2 DAYS AGO
Insider

Emotional intelligence is the ability to manage your emotions and empathize with others, which is paramount to your success at work and in life.
MENTAL HEALTH・2 DAYS AGO
Variety

Hearst Media Production Group has named three senior executives to lead the newly formed company, which was launched by Hearst Corporation last September to beef up Hearst Television’s original program production and distribution. Bryan Curb has been promoted to executive vice president and general manager, educational/informational (E/I) programming. Angelica Rosas McDaniel has been named executive vice president and general manager, entertainment. Chris Matthews, who previously served as senior vice president and chief financial officer for Litton Entertainment, has been given the title of chief financial officer. Additionally, Hearst confirmed that its Litton Entertainment will be rebranded under Hearst Media Production Group “to...
BUSINESS・2 DAYS AGO