Voters turning away from Biden and Democrats as inflation and pandemic persist, polls show 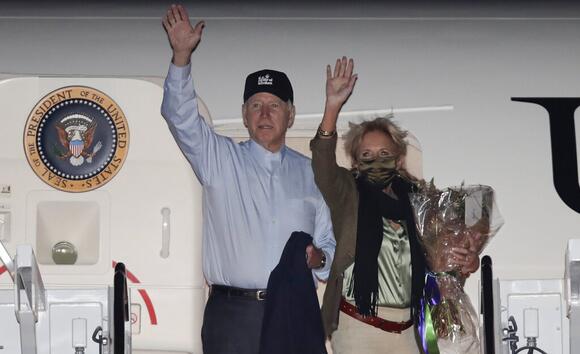 President Joe Biden and the Democrats in Congress are in political free fall as key voting blocs conclude that the majority party in Washington is ignoring their most pressing problems.

Biden’s job approval rating had nosedived to near 40% as the annual holiday season commenced, with Republicans taking the lead in generic-ballot polling gauging which party voters would prefer be in charge on Capitol Hill. The corresponding changes in Democratic and GOP fortunes have coincided with skyrocketing inflation and lingering pandemic conditions that are causing anxiety and frustration among the independents and suburban Republicans whose critical votes put Biden and the Democrats in power.

Challenging economic conditions and risks from the coronavirus would pose political hurdles for any administration, as they did for former President Donald Trump. But Republican pollsters say the troubles afflicting Biden that threaten to remove congressional Democrats from power in 2022 run deeper. For voters, inflation and the pandemic are priorities. Meanwhile, they see Democrats in Washington focused on creating and expanding social programs — and fighting among themselves to do it.

“The agenda the Democrats are pushing is not the agenda the American people feel they’re dealing with,” said David Winston, a GOP pollster who advises congressional Republicans. “This is a more fundamental problem.”

One year after Biden ousted Trump and the Democrats captured the Senate, completing the takeover of Congress initiated in the 2018 midterm elections, the party is in a total quagmire.

Centrist and liberal Democrats on Capitol Hill are at odds over Biden’s $2 trillion proposal to invest taxpayer dollars on a host of new social programs, infighting that has lasted for months and contributed directly to the party’s deteriorating political position. Accordingly, newly revealed polling, reported first by Politico , shows that Trump is leading Biden head-to-head in a hypothetical rematch in crucial battleground states — and the Democratic Party’s image among critical voting blocs is cratering .

In the aftermath of Republican Gov.-elect Glenn Youngkin’s upset victory this month in Virginia, a state the president won by more than 10 points in November, centrist Democratic think tank Third Way commissioned a series of focus groups with Biden voters in the suburbs of Richmond and Washington to find out what went wrong. What they found was startling. According to the memo prepared by ALG Research:

Senior spokesman for Third Way Matt Bennett told the Washington Examiner the Democrats are in distress with no clear path to recovery, although he said enacting Biden’s social spending program, the legislation known as “Build Back Better,” would improve the party’s prospects significantly.

“We don’t know yet precisely what the Democratic brand problem is or where it comes from. Our sense is that the brand issues substantially predate Biden and are about a range of things — distrust on handling the economy and a sense that we are out of touch on some culture issues,” Bennett said. He added that Republicans have benefited substantially from Trump’s exit from the White House.

“The GOP brand has been given a temporary reprieve from Trump,” Bennet said. “[It’s] not clear that congressional candidates can slip that noose as deftly as Youngkin did. But it won’t be as potent as when Trump is actually on the ballot.”

Historically, presidents are rebuked in midterm elections, with the brunt falling on members of their party in the House and Senate. In that regard, the world of hurt that could await Democrats in 2020 is normal. The same happened to Trump in 2018, when Democrats flipped 40 House seats and captured Senate seats in Arizona and Nevada. The same happened to Republicans George W. Bush in 2006 and Ronald Reagan in 1982 and 1986.

But Republican pollster Wes Anderson said Biden is experiencing more than the beginnings of the typical midterm election reprimand.

Anderson conducted “an absurd amount” of focus groups in 2019 and 2020. The sessions included swing voters, most of whom were independents, but also some soft Republicans and conservative Democrats. The overwhelming opinion he ran into was broad support for Trump on a range of issues. But Biden appealed to them because he was campaigning as a centrist and they were almost totally exhausted by Trump’s provocative behavior. Biden, they thought, would be competent and restorative.

Instead, they see a president who is governing like a boilerplate liberal and who is beholden to the left wing of his party. This Biden is not the uniter they bargained for. After they watched his leadership of the botched withdrawal of American military forces from Afghanistan, swing voters determined that he was also not the “competent” alternative to Trump that they thought they voted for.

“Currently, a sizable majority of American voters have decided that President Biden and his party are 1) horribly incompetent, 2) deeply divisive, and 3) controlled by the radical Left. In that order,” Anderson said. “Any one of these factors is a real problem for the Democrats. All three are deadly.”

I thought Biden said he will handle the pandemic better than Trump ......ah NO JOE YOU DIDNT. more deaths this year ....with Vaccine, masks and locks downs ?? Explain that CDC .....This was all about getting Trump out !!!

And there are still people foolish enough to say meh at least it’s not Trump…. The sheer speed at which this guys failings have occurred is nothing short of incredible.

Seems to me at least we would see a FEW (million) comments here from voters who swallowed their pride and say “I made a mistake.” Seems their throats got too small to swallow anything now. But that is just a few because they stole about 40 million votes from us. I guess the vaxxers are too busy buying burial insurance and coffins.

The top Republican on the banking committee has written to President Joe Biden questioning the geographic and industrial diversity of his Federal Reserve picks, raising the specter of legal problems that could threaten the nominations.
WASHINGTON, DC・17 HOURS AGO
WashingtonExaminer

House Majority Leader Steny Hoyer on Tuesday said he agrees with President Joe Biden’s assertion that the results of the midterm elections may not be legitimate to Democrats if they are unable to pass two election and voter overhaul measures.
PRESIDENTIAL ELECTION・18 HOURS AGO
WashingtonExaminer

Public confidence in President Joe Biden’s handling of major issues such as the economy has fallen off dramatically since the start of his first year, a new survey found.
PRESIDENTIAL ELECTION・20 HOURS AGO
The Independent

One year after President Joe Biden raised his right hand to swear the presidential oath of office, more Americans disapprove of his performance and believe their country is on the right track than at any point since his term began.Of the 2,005 registered voters surveyed by Morning Consult and Politico, more than half – 56 per cent – either somewhat or strongly disapprove of the job Mr Biden has done in his first year as America’s chief executive, with just 16 per cent strongly approving of his performance and a quarter of respondents approving of his work somewhat. Worse yet...
PRESIDENTIAL ELECTION・1 DAY AGO

House Speaker Nancy Pelosi has announced her intention to run for re-election, extending a career in the House of Representatives spanning more than three decades, ahead of a midterm election battle that could determine the balance of power in Congress.The California congresswoman – who is serving her 17th term in the House, and fourth term as speaker – made the announcement on her campaign’s social media channels on 25 January.While we have made progress much more needs to be done to improve people’s lives. This election is crucial: nothing less is at stake than our Democracy.But we don’t agonize-we...
PRESIDENTIAL ELECTION・15 HOURS AGO
POLITICO

"March 1 is not a deadline for one thing or another," he said at a POLITICO event. What happened: Majority Leader Steny Hoyer took a pragmatic tone about the future of the Democrats' climate change and social spending bill during an interview with POLITICO on Tuesday, insisting the March 1 State of the Union address should be viewed as an artificial deadline.
CONGRESS & COURTS・20 HOURS AGO
Newsweek

Banks also tweeted a video of the exchange between President Joe Biden and Fox News' Peter Doocy with the caption "Congrats" and tagged Doocy.
PRESIDENTIAL ELECTION・19 HOURS AGO
Business Insider

Manchin remains peeved over a White House statement that singled him out, The Washington Post reported.
CONGRESS & COURTS・1 DAY AGO

More than half of Americans disapprove of President Joe Biden’s handling of his responsibilities in a new Pew Research Group survey published on Tuesday that found Mr Biden’s approval rating slipping further underwater.Just above four in 10 Americans, 41 per cent, gave Mr Biden positive marks in the poll while 56 per cent say the president is not doing a good job; his approval rating dropped by the same amount, 3 percentage points, by which his disapproval rating rose over the four months between the last survey released by Pew and January 25.Corresponding with that shift in Mr Biden’s...
PRESIDENTIAL ELECTION・17 HOURS AGO
Newsweek

While Republicans such as Greg Abbott and Ted Cruz have said Biden has an "open border," immigrations experts have said that is not correct.
PRESIDENTIAL ELECTION・1 DAY AGO
Business Insider

The new Gallup survey found that 37 percent of U.S. adults rate Biden as a strong and decisive leader.
PRESIDENTIAL ELECTION・1 DAY AGO
The Guardian

The president may have abandoned hopes of working with the GOP as he recently criticized his opponents in an address asking: "What are Republicans for?"
PRESIDENTIAL ELECTION・22 HOURS AGO

WASHINGTON (TND) — The political environment facing Democrats is darkening as President Joe Biden enters the second year of his term, with several new polls showing voters are disappointed in the direction his administration has led the country and are prepared to hold his party accountable in the midterm elections.
PRESIDENTIAL ELECTION・20 HOURS AGO
Newsweek

Democrats gained support from voters living in the country's suburbs in recent elections. A new poll indicates that support may be eroding.
PRESIDENTIAL ELECTION・22 HOURS AGO
WashingtonExaminer