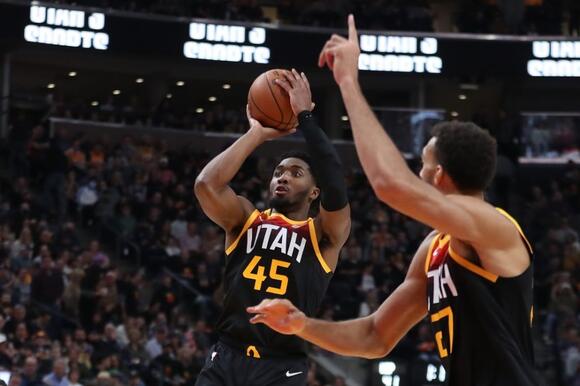 Mitchell, who has been struggling to find his groove lately, played like his usual self in the first half when Utah built a commanding lead, scoring 17 points on 7-of-14 shooting with seven assists and five rebounds.

Utah took a double-digit lead in the first quarter and built that into a 122-83 cushion with four minutes remaining.

Devonte’ Graham, the hero of Friday’s game, started Saturday’s contest with a jumper to put the Pelicans on the board first a night after sinking a game-winning 3-pointer.

New Orleans was still within one point several minutes later after Josh Hart’s layup trimmed the Utah lead to 11-10. 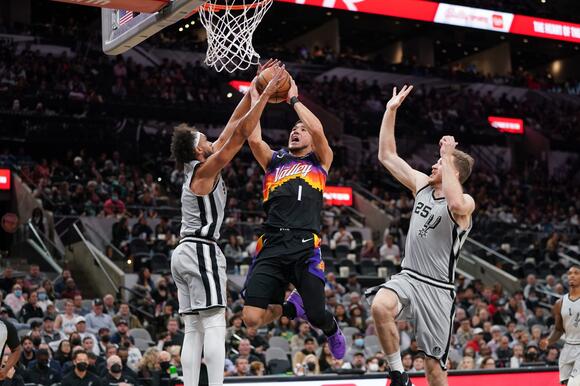 Bojan Bogdanovic then hit a pair of free throws followed by a Gay triple, and the Jazz were off and running.

The Jazz only scored two points the rest of the quarter – on a 10-footer by Mitchell – and the Pelicans cut the home team’s lead to 64-56 with a 12-2 run heading into the locker room.

Donovan Mitchell has been ruled out for the game between the Houston Rockets and Utah Jazz.
NBA・2 DAYS AGO
FanSided

The Utah Jazz may need to make a major change. Unfortunately, they only have so many avenues towards doing so. This team is not flush with promising young players. The ones they do roster haven’t been afforded the opportunity to demonstrate their value. Jared Butler has looked like a potentially productive player, but in 5.7 minutes per game, he can only show so much. The same can roughly be said for either of Elijah Hughes or Udoka Azubuike.
NBA・1 DAY AGO
slcdunk.com

It’s the darkest timeline right now for the Utah Jazz as they face the Detroit Pistons again tonight. Utah has been in a free fall lately and it’s been a tough go for Jazz fans as they’ve watched the team struggle to beat the teams with the worst records in the league, and the Lakers. If Utah wants to stop the bleeding they’ll have to get started tonight.
NBA・10 HOURS AGO
slcdunk.com

Rockets scorch Jazz from deep in 116-111 win over Utah

Loss to rebuilding Rockets a cause for concern for Utah Jazz

It should be said that the Utah Jazz were without star player Donovan Mitchell in last night’s game. He is, obviously, the best offensive player on this Jazz team. They are not the same squad without him. It still certainly feels like they should be able to beat these...
NBA・1 DAY AGO
Sportsnaut

The Utah Jazz are crumbling. Here’s how they fix it

At a young age, aspiring basketball players are taught two imperatives: (1) always have fun and (2) always play with heart on defense. On Tuesday night, the Utah Jazz suffered an embarrassing loss to the Houston Rockets, the worst team in the Western Conference. This, the sixth loss in seven games, marks a new low point for a team struggling to find focus, purpose, or identity.
NBA・16 HOURS AGO
Lakers Nation

It is clear at this point that the Brooklyn Nets are looking to shake up their roster ahead of the upcoming February trade deadline. Whispers of a James Harden exit have already emerged, while reports of a potential trade for promising big man Nic Claxton have also surfaced. Another name...
NBA・1 DAY AGO
The Spun

Five-star quarterback transfer Jaxson Dart is one of the most highly-sought-after prospects in the 2022 portal. And on Wednesday, he made an interesting visit to a prospective school. According to reports from On3 Sports, the now-former USC signal caller traveled to his hometown of Provo, Utah to visit with the...
PROVO, UT・2 DAYS AGO
USA TODAY

The Nuggets have a scoring margin of a championship team when Nikola Jokic plays, and when he sits, they are worse than the NBA's worst team.
NBA・1 DAY AGO

Michael Jordan is perhaps, the biggest legend in the history of the NBA. Jordan is considered by many people as the greatest player to ever play the game of basketball. MJ is an icon, a superstar that any team would love to have had on their team. But one of his former assistant coaches once advised Phil Jackson to take him out of a game during the NBA Finals.
NBA・2 DAYS AGO
Sportsnaut

According to The Athletic’s Shams Charania, the Brooklyn Nets have agreed to find big man Paul Millsap a new team
NBA・15 HOURS AGO
FastBreak on FanNation

Devin Booker, Chris Paul and the Phoenix Suns are in Dallas to play the Mavericks.
NBA・1 DAY AGO

Bulls Injury Report Against The Cavs

The Chicago Bulls are hosting the Cleveland Cavaliers on Wednesday night in Chicago.
NBA・2 DAYS AGO
USA TODAY

Luka Doncic has many of the same flaws as Russell Westbrook but gets far less criticism. He may not be able to outrun it much longer.
NBA・14 HOURS AGO
The Spun

No stranger to making headlines, on Wednesday ESPN personality Stephen A. Smith ruffled some feathers with his latest NBA take. Speaking across the table to Jay Williams, Stephen A. attempted to make the case that Grizzlies point guard Ja Morant may be more valuable to his team than Giannis is to the Milwaukee Bucks.
NBA・2 DAYS AGO
FastBreak on FanNation