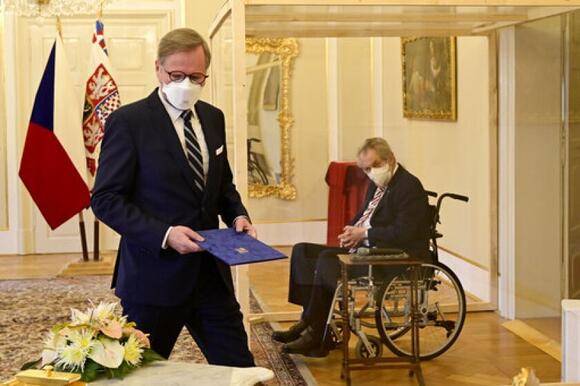 Milos Zeman, in a wheelchair, was separated from Fiala and the other officials by transparent panels during the ceremony at the presidential chateau in Lany, west of Prague. The president tested positive for coronavirus last week and must isolate.

Following the Oct. 8-9 vote, a three-party, liberal-conservative coalition known as Together, composed of the Civic Democratic Party, Christian Democrats and the TOP 09 party, led with a 27.8% share of the vote.

Together teamed up with a center-left liberal coalition made up of the Pirate Party and STAN — a group of mayors and independent candidates — which came in third place with 15.6% of votes.

The new partnership will hold 108 seats in the 200-seat lower house of Parliament, relegating populist Prime Minister Andrej Babis and his centrist ANO (YES) movement to the opposition.

The five parties in the future governing coalition have agreed on a power-sharing deal. They are closer to the European Union than Euroskeptic Babis.

Fiala, 57, who has led the conservative Civic Democratic Party since 2014, is a professor of political sciences. Previously, he served as Education Minister between 2012-13.

It’s not immediately clear when Zeman might appoint the entire Cabinet. Zeman said he will meet the candidates for the ministers between Monday and Dec 13 to discuss their future jobs.

Zeman, 77, was only discharged from the capital’s military hospital on Saturday following more than a month's treatment for an unspecified illness and then a couple of days of concern after he tested positive for the coronavirus. The ceremony had originally been due to take place on Friday.

He was rushed to the hospital on Oct. 10, a day after the election for the lower house of parliament, and was treated in an intensive care unit. His condition was attributed to an unspecified chronic disease.

The far-right Alternative for Germany party has presented a member of former Chancellor Angela Merkel's Christian Democratic Union as its long-shot candidate to become the country's next president, prompting his own party to call for him to leave or face possible expulsion
PRESIDENTIAL ELECTION・2 HOURS AGO
San Diego Union-Tribune

Italian party chiefs struggle to nail deal on next president

The president of Armenia has announced his resignation, complaining that his office is not granted sufficient powers to allow him to be an effective head of state
WORLD・1 DAY AGO
The Independent

Berlusconi drops bid to be elected as Italy's president

Former premier Silvio Berlusconi on Saturday bowed out of Italy s presidential election set for next week, though he insisted he had nailed down enough voters to become head of state.Berlusconi, 85, said in a statement that after much reflection he had opted to “take another step on the path of national responsibility.” The media mogul asked his supporters not to vote for him.A lightning rod for political protests who survived sex scandals and a tax fraud conviction, Berlusconi said he doesn’t want his name to be the cause of “polemics or lacerations” that the country can’t afford in...
PRESIDENTIAL ELECTION・2 DAYS AGO

The leader of Hungary's political opposition has announced he has tested positive for COVID-19 amid a surge in cases fueled by the highly transmissible omicron variant
PUBLIC HEALTH・6 DAYS AGO
newmilfordspectrum.com

PRAGUE (AP) — The Czech Republic's new government on Wednesday dismissed the previous government’s plan to require older adults and people in some professions to get vaccinated against the coronavirus. The previous government, led by Prime Minister Andrej Babis, released an order in early December, making vaccination mandatory...
PHARMACEUTICALS・6 DAYS AGO
crossroadstoday.com

The Czech Republic’s new government won a mandatory confidence vote in the lower house of Parliament on Thursday with the coronavirus pandemic and soaring inflation presenting its immediate policy challenges. Lawmakers voted 106-87 in favor of the conservative-led government, in the ballot that every new administration must win to...
BUSINESS・11 DAYS AGO
The Guardian

The Ukrainian government says Russia has spread "a large amount of misinformation, manipulation and fakes" to sow panic among Ukrainians and foreigners.
POLITICS・17 HOURS AGO
Newsweek

In timely news — given the current geopolitical state of things — Sundance Film Festival has announced Navalny, about the titular Russian opposition leader and anti-corruption activist, as the mystery final film in the U.S. Documentary Competition section. The film premiere will be the culmination of Sundance's online...
MOVIES・19 HOURS AGO
The Independent

Russia’s Foreign Ministry on Sunday rejected a British claim that Russia was seeking to replace Ukraine’s government with a pro-Moscow administration, and that former Ukrainian lawmaker Yevheniy Murayev was being considered as a potential candidate. Britain’s Foreign Office on Saturday also named several other Ukrainian politicians it said had links with Russian intelligence services, along with Murayev who is the leader of a small pro-Russia party that has no seats in the parliament.The U.K. government made the claim based on an intelligence assessment, without providing evidence to back it up. It comes amid high tensions between Moscow and the...
POLITICS・2 DAYS AGO

Ukraine urges calm, saying a Russian invasion is not imminent

Ukraine's leaders are seeking to reassure their jittery compatriots that an invasion from neighboring Russia is not imminent, despite a troop buildup.
POLITICS・4 HOURS AGO
AFP

Britain on Saturday alleged that it had information that Moscow was "looking to install a pro-Russian leader in Kyiv" as fears of a Russian invasion of Ukraine grow. Tensions have soared in recent weeks as tens of thousands of Russian troops mass on Ukraine's border, along with an arsenal of tanks, fighting vehicles, artillery and missiles. London said it had seen evidence that several former Ukrainian politicians had maintained links with Russian intelligence services, and that former MP Yevgen Murayev was being considered as a potential leader. Some of those in contact with Russian intelligence officers were "currently involved in the planning for an attack on Ukraine", the Foreign Office said in a statement, though did not release details of the evidence. A US official called the alleged plot "deeply concerning".
POLITICS・2 DAYS AGO
AFP

A prominent Cuban dissident was arrested along with three other women in the capital Havana on Sunday, her husband said. "They were arrested at approximately 11 in the morning, when they were preparing to go to Santa Rita," Moya said, referring to the church where the women usually attend mass on Sunday before marching.
PROTESTS・1 DAY AGO
caribbeannationalweekly.com

The leader of the opposition Democratic Labour Party in Barbados, attorney Verla De Peiza resigned. Her resignation comes less than 48 hours after she led the main opposition Democratic Party (DLP) to its second worst defeat in its history. The DLP lost by a 30-nil margin in Wednesday’s general election...
PRESIDENTIAL ELECTION・3 DAYS AGO
WDEZ 101.9 FM

PHNOM PENH (Reuters) – Cambodia is set to resume the treason trial on Wednesday of banned opposition party leader Kem Sokha after a two-year delay due to the pandemic, in a case condemned by the United States as politically motivated. Kem Sokha was arrested in 2017 and his opposition...
POLITICS・6 DAYS AGO
MarketWatch

In the ongoing conflict between Russia and Ukraine, Russian President Vladimir Putin’s eyes are on a bigger prize, a top expert on Putin and his country says. “This time,” writes former intelligence officer Fiona Hill in a New York Times op-ed, “Mr. Putin’s aim is bigger than closing NATO’s ‘open door’ to Ukraine and taking more territory — he wants to evict the United States from Europe. As he might put it: ‘Goodbye America. Don’t let the door hit you on the way out.’ ”
POLITICS・22 HOURS AGO
Newsweek

Tucker Carlson opened Monday’s show by arguing that imposing harsh sanctions on Russia would end up negatively impacting the United States. In the process, he called Sen. Joni Ernst (R-IA) “totally ignorant.”. Carlson has repeatedly cautioned against antagonizing Russia over Ukraine. “The Chinese government is the only certain...
FOREIGN POLICY・10 HOURS AGO