Darius Garland's floater is the next step in his breakout campaign 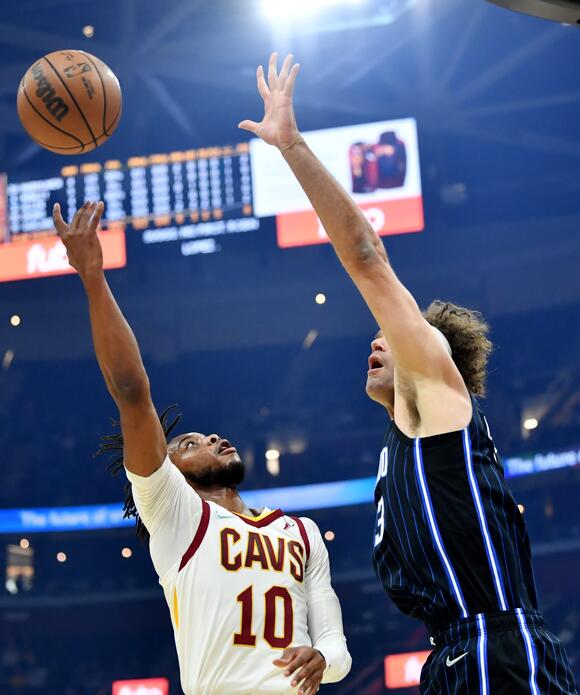 Entering the 2021-22 season, Cleveland Cavaliers guard Darius Garland was the top pick by NBA executives for a breakout season. In what has become a nightly occurrence, the third-year guard is proving them right.

The Vanderbilt product scored a game-high 26 points while dishing out 11 assists in the team’s 105-92 win ove the Magic on Saturday night.

Garland, 21, has really come into his own offensively, showcasing the ability to score in multiple ways as well as creating both in his dribbling and passing.

The additions of Cavaliers big men Jarrett Allen and Evan Mobley in the paint have allowed Garland to take the next step in his interior offensive game, with the threat of lobs for both opening Garland to utilize his floater.

With Garland stepping up his game, it makes life easier on Allen, who has been on the receiving end of many alley-oops from Garland throughout the season.

“It changes the game completely,” Allen said of Garland’s development in the paint this season. “They say the roller [in pick-and-rolls] has a lot of gravity and brings people to him, but Darius draws three guys in every time he goes to the paint. Even his floater, sometimes, I get confused if it’s a floater or a lob! It’s a good problem to have. He just does so well, whether it’s the pass out, the lob, the shot. He knows which option to pick every time.”

With Collin Sexton out for the season, a lot of offensive responsibility has fallen on his shoulders and Garland has clearly stepped up to the challenge, averaging 21.8 points and 6.5 assists since Sexton’s injury against the Knicks on November 7th.

Cavaliers promising rookie Evan Mobley made his return to the lineup for the Cavaliers for the first time since injuring his elbow against the Boston Celtics on November 15th. It’s pretty safe to say that it was a success.

Mobley quietly had 13 points, nine rebounds, three assists, and a team-high four blocks. With the big man back in action, the rest of the lineup had the ability to play more freely on the defensive end of the court.

“It makes them feel safe,” Bickerstaff said after the game. “The combination of [Mobley] and Jarrett [Allen] are two of the best rim protectors in our league. When you have those guys back there, you feel a lot more comfortable on the ball and how aggressive you can be on the ball. It really helps our defense shrink the floor and try to speed teams up and keep them out of their comfort zones.”

The combination of Mobley, Allen, and fellow big man Lauri Markkanen adds plenty of length on the defensive end. Add in a premier on-ball defender like Cavaliers wing Isaac Okoro, and Bickerstaff and co. could have opponents locked down like Fort Knox.

NBA power rankings: Now that the NBA season is in full swing, it’s time to rank all 30 teams. With
NBA・3 HOURS AGO
NBA

Wins award for first time of career and is second Cavalier to earn the honor this season; was one of only two NBA players to average at least 20.0 Points, 6.0 Rebounds and 12.0 assists during Cleveland's perfect 4-0 week. CLEVELAND – The NBA announced today that Cleveland Cavaliers guard...
NBA・2 DAYS AGO
Morning Journal

The bigger the challenge, the bigger the moment, the bigger Cavaliers point guard Darius Garland plays. Garland on Jan. 17 was named NBA Eastern Conference Player of the Week for games played Jan. 10-16. He led the Cavs on a 4-0 Western swing through Sacramento, Utah, San Antonio and Oklahoma City. He averaged 20.5 points, 12.8 assists and six rebounds in 35.5 minutes a game during the stretch.
NBA・2 DAYS AGO
FastBreak on FanNation

Rajon Rondo has been ruled out for Monday's game between the Brooklyn Nets and Cleveland Cavaliers.
NBA・2 DAYS AGO

The 2021-22 season is in full tilt, so it is time to look at rookie rankings in our NBA Rookie
NBA・4 HOURS AGO
WKYC

CLEVELAND — Dating back to his days as an NBA prospect, Darius Garland has maintained a relationship with LeBron James. But when it comes to what the Cleveland Cavaliers are accomplishing without the best player in their franchise's history, Garland admitted that he's excited for his team to be building a reputation of its own.
NBA・3 HOURS AGO
Cleveland.com

CLEVELAND, Ohio -- Brooklyn’s James Harden and Kyrie Irving have 16 combined All-Star appearances. Darius Garland could be headed for his first. Behind their rising third-year point guard, the Cavaliers beat the Nets, 114-107, inside an amped Rocket Mortgage FieldHouse. Performances like Monday only help thicken Garland’s All-Star case....
NBA・2 DAYS AGO
FanSided

Darius Garland is commanding the Cleveland Cavaliers to perfection

Darius Garland is only a year removed from his 21st birthday, but the youthful third-year guard is commanding the Cleveland Cavaliers to perfection. The stakes could not be higher for Garland. His backcourt running mate and last year’s leading scorer, Collin Sexton, is out for the year with a meniscus injury, while the next man up, Ricky Rubio, is sidelined with a torn ACL.
NBA・4 HOURS AGO

Toronto Raptors point guard Fred VanVleet and Cleveland Cavaliers dynamo Darius Garland are both looking to become All-Stars for the first time in their careers. In the recent batch of votes, VanVleet and Garland placed 8th and 9th, respectively, when it came to guards in the East. VanVleet accumulated 350,806...
NBA・2 DAYS AGO
Cleveland.com

CLEVELAND, Ohio -- It’s almost unfair how easy Cavs rookie Evan Mobley makes basketball look. The Brooklyn Nets were on the receiving end of that on Monday afternoon as the Cavs picked up a 114-107 “signature win,” in the words of head coach J.B. Bickerstaff. In this...
NBA・1 DAY AGO
FastBreak on FanNation

Bulls Injury Report Against The Cavs

The Chicago Bulls are hosting the Cleveland Cavaliers on Wednesday night in Chicago.
NBA・2 HOURS AGO
ClutchPoints

Cleveland Cavs guard Darius Garland has been on fire as of late, as he recently capped off a monster week with an epic record, joining LeBron James in Cavs’ history. Garland was rewarded for his amazing efforts, as the NBA made an announcement of a special honor, one that the Cavs guard took home.
NBA・2 DAYS AGO

Cleveland Cavaliers guard Darius Garland is hoping the team can pave their own legacy of success this postseason in the post-LeBron James era. The time since James left the Cavaliers for a second time to join the Los Angeles Lakers had not been pretty before this season. Cleveland had been near the bottom of the league in every season after making four NBA Finals appearances in a row with James.
NBA・5 HOURS AGO
watchstadium.com

There’s a group of bigs that are dominating in Cleveland. And there’s a young guard that’s hoping to lead them all to a playoff appearance in his third season. Darius Garland talks to Shams about his emerging Cavaliers team. How far can they go?
NBA・1 DAY AGO
FanSided

Cavs Top 3: Darius Garland starred in the “Who’s The Boss?” revival vs. the Nets

The Cleveland Cavaliers took the Nets down behind Darius Garland’s efforts. The Cleveland Cavaliers are rolling after Monday afternoon’s win against The Brooklyn Nets. The Cavs efforts against the Nets were impressive, and despite the Nets being without Kevin Durant, they had James Harden and Kyrie Irving. A duo good enough to win on their own.
NBA・22 HOURS AGO
CBS Sports

Darius Garland on Cavaliers' success: Having our own legacy separate from LeBron James 'would be pretty cool'

The shadow of LeBron James hangs over virtually everything the Cleveland Cavaliers do. He did far more than win Cleveland its first championship. The Cavs have made the playoffs nine times since 1998, and James was on each team that did so. But that's going to change this season. This...
NBA・5 HOURS AGO
92.3 The Fan

The Cleveland Cavaliers have been one of the biggest surprises in the NBA this season and actually look like a playoff team. They’re currently riding a five-game winning streak and sit at 27-18, which is good for fifth in the East. Cavs guard Darius Garland has been a big part of that, leading the squad in scoring and stepping up heavily in place of the injured Collin Sexton and Ricky Rubio.
NBA・7 HOURS AGO
ClutchPoints

The Cleveland Cavaliers have shattered all expectations midway through the season, and at the forefront of it all is Darius Garland. Widely considered as the head of the snake for the Cavs, the 6-foot-1 point guard has, time and again, carried his team when needed most. As Garland continues to...
NBA・21 HOURS AGO
ClutchPoints

LeBron James and Magic Johnson engaged in a bit of an indirect back-and-forth on Twitter over the weekend. Following the Los Angeles Lakers blowout loss to the Denver Nuggets on Saturday, the Hall of Fame point guard sent out a critical tweet calling out the Lakers’ effort. Less than...
NBA・1 DAY AGO