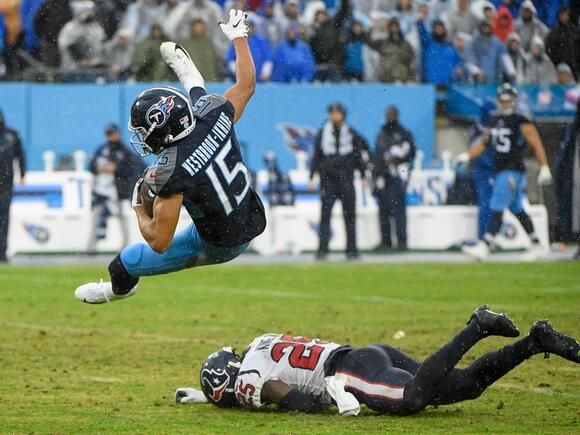 Discover player props odds, plays, and insights for Nick Westbrook-Ikhine in his Week 12 contest with the Tennessee Titans against the New England Patriots.

Nick Westbrook-Ikhine has player prop bet markets available from oddsmakers before his next NFL game on Sunday at 1:00 PM ET airing on CBS. Westbrook-Ikhine and the Tennessee Titans (8-3) square off against the New England Patriots (7-4) in Week 12 at Gillette Stadium.

Mike Vrabel refused to throw his quarterback under the bus following the Tennessee Titans’ embarrassing loss to the Cincinnati Bengals on Saturday afternoon. Ryan Tannehill, the 33-year-old veteran, was awful in the Titans’ 19-16 loss to the Bengals. He threw three picks during the outing, two of which led to field goals by Cincinnati.
NFL・1 DAY AGO
Falcon Report

Before Saturday, the Bengals had never before won a road playoff game. Now, they’re headed to the AFC championship game.
NFL・1 DAY AGO

Discover player props odds, plays, and insights for Ryan Tannehill in his NFL Playoffs contest with the Tennessee Titans against the Cincinnati Bengals.
NFL・2 DAYS AGO
USA TODAY

Derrick Henry, who missed the last nine games of the regular season, is set to make his return for the Tennessee Titans' playoff run.
NFL・2 DAYS AGO
Sports Illustrated

The Tennessee quarterback threw three critical interceptions against the Bengals, the last one coming in the final 30 seconds of the game.
NFL・1 DAY AGO
Sports Illustrated

NFL Playoffs Takeaways: Stafford As He Always Was, Was This the End of Brady?

A painful playoff loss and three interceptions moved Ryan Tannehill's struggles from a 2021 annoyance to a primary topic in 2022 for Tennessee Titans.
NFL・16 HOURS AGO
Sportsnaut

Super Bowl 2022: The Tampa Bay Buccaneers are the reigning NFL champions, but who'll make the playoffs — and lift the Lombardi Trophy at the end of this season?
NFL・4 HOURS AGO
Sportsnaut

The Michigan Wolverines finally returned to glory in 2021, winning their first Big Ten Conference title since 2004 and earning
NFL・2 DAYS AGO
Sportsnaut

NFL picks against the spread. NFL Championship Sunday edition. And then there were four. With three road teams winning on
NFL・3 HOURS AGO

The Baltimore Ravens made a very surprising coaching move on Friday evening with the decision to fire defensive coordinator Don “Wink” Martindale. Baltimore announced the news with a statement from head coach John Harbaugh, who said that he and Martindale “have agreed to move forward in separate directions.”
NFL・2 DAYS AGO
Sportsnaut

The Tampa Bay Buccaneers came up short against the Los Angeles Rams after nearly making an incredible comeback. It wasn’t enough, and now Tampa Bay finds themselves out of the running for Super Bowl 56. Additionally, Tom Brady’s future in football is now in question and Bruce Arians weighs in.
NFL・7 HOURS AGO
Sports Illustrated

Tampa‘s former receiver had some words for Brady ahead of Sunday‘s divisional round matchup.
NFL・9 HOURS AGO
Sports Illustrated

The quarterback is not a fan of Cincinnati being known as underdogs.
NFL・1 DAY AGO
The Spun

On Friday night, five-star quarterback recruit Arch Manning had the best college football coach in the country – and his top assistants – at his high school basketball game. Manning, the No. 1 quarterback recruit in the 2023 class, is also a star on the hardwood. Alabama coach...
COLLEGE SPORTS・1 DAY AGO
Sports Illustrated

Green Bay’s stunning loss to San Francisco at a snowy Lambeau Field on Saturday night threw the NFL playoffs into disarray. It also opened up Packers quarterback to a lot of jokes on Twitter about his poor play (by his standards, at least) and controversial vaccination beliefs—some good, some bad, many hitting the same notes.
NFL・1 DAY AGO
Falcon Report

Ben McAdoo will become an NFL offensive coordinator for the first time since 2015.
NFL・2 DAYS AGO