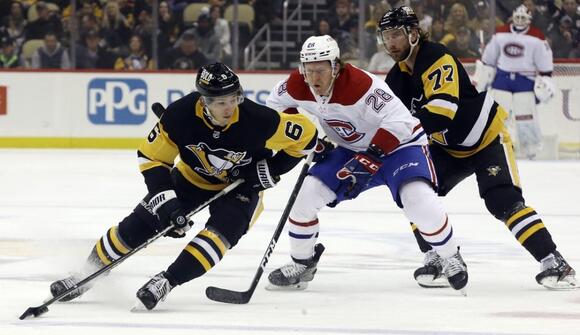 Josh Anderson scored twice, and Jonathan Drouin, Christian Dvorak, Artturi Lehkonen and Tyler Toffoli also scored for the Canadiens, who had been 1-5-1 in their previous seven games and picked up their second win in 12 road games.

Sidney Crosby had a goal and two assists, and Evan Rodrigues and Jeff Carter scored for the Penguins.

Drouin caught up with the puck that hopped over the stick of Pittsburgh defenseman Kris Letang, and he had a couple steps on Letang. Drouin moved in on DeSmith and slipped a backhander between the goalie’s pads for a 1-0 Canadiens lead at 15:34 of the second.

The Penguins tied it during a power play at 2:33 of the third. After Letang worked to keep the puck in the Montreal end, Rodrigues scored on a rising shot from between the hash marks.

The Canadiens regained the lead 32 seconds later. Dvorak was left alone in the low slot and easily tipped in a pass from Sami Niku from the right corner to make it 2-1.

Related: If you’re a fan of the Penguins, check out #LetsGoPens rumors, rankings, and news here .

Montreal struck again at 6:16 of the third for a 3-1 lead. Lehkonen whacked in a rebound from a crowd at the top of the crease.

Carter closed it to 3-2 with 2:37 remaining when his knuckler went in off Allen’s left shoulder.

Related: If you’re a fan of the Canadiens, check out #GoHabsGo rumors, rankings, and news here .

Anderson was awarded another goal with 47.4 seconds left when he was hauled down on a breakaway toward an empty net. Toffoli also scored an empty-netter to make it 6-3.

During the game, multiple reports surfaced that Scott Mellanby had resigned as assistant general manager of the Canadiens.

you can’t beat them, join them! And by “join them” we mean take all of their players. On their current roster, the Washington Capitals carry four former Pittsburgh Penguins.
NHL・1 DAY AGO
93.7 The Fan

37-year-old center Jeff Carter came to the Pens in April, he’s made such an impression, he received a contract extension after 12 goals & 14 assists this year
NHL・1 DAY AGO
FanSided

The Montreal Canadiens have reached the halfway point of their season with a record of 8-26-7. Obviously a sell off is going to happen before the trade deadline. The question isn’t whether players on expiring contracts like Ben Chiarot, Mathieu Perreault, Brett Kulak and Chris Wideman will be traded. Those guys are as good as gone.
NHL・1 DAY AGO
Yardbarker

How will the Montreal Canadiens approach the trade deadline?

As the trade deadline approaches, we’ll be doing a team-by-team look at who should be buying and selling and which players might be on the move. Today, we have the Montreal Canadiens. The Situation. What a fall. Back in July, the Montreal Canadiens were in the Stanley Cup Final....
NHL・2 DAYS AGO

The Montreal Canadiens traveled back to Quebec yesterday after a thrashing at the hands of the Minnesota Wild. Their 8-2 loss on Monday night was the ugliest in a long list of bad games during the first half of the 2021-22 season. That game was the second consecutive one that...
NHL・1 DAY AGO
FanSided

The Montreal Canadiens lead the National Hockey League in “mans games lost to injury.”. In other words, no other team has dealt with as many injuries as the Canadiens this season. It isn’t the only reason they have been terrible but it hasn’t helped. A team can’t...
NHL・11 HOURS AGO
Sportsnaut

The Pittsburgh Penguins and forward Jeff Carter reached agreement Wednesday on a two-year extension worth $6.25 million. The deal begins
NHL・1 DAY AGO
Sportsnaut

The Seattle Kraken’s nickname does not mean sacrificial lamb in some obscure language, and the Pittsburgh Penguins probably shouldn’t assume
NHL・1 DAY AGO

At times during Tuesday’s 6-3 win over the Arizona Coyotes at PPG Paints Arena, fans may thought they were seeing the hockey equivalent of the Harlem Globetrotters making a laughingstock out of the Washington Generals.
NHL・1 DAY AGO
PensBurgh

He said it initially it was a head-shot and after having time to watch it, Pens head coach Mike Sullivan questions why the league won’t punish the hit on Teddy Blueger
NHL・2 DAYS AGO

With only eight games remaining between Thursday and the end of February, the Tampa Bay Lightning will look to get
NHL・1 DAY AGO
CBS Boston

By Michael Hurley, CBS Boston BOSTON (CBS) — It’s early in the Tuukka Rask 2.0 Era for the Boston Bruins, but the results have been discouraging thus far. Rask fell to 2-2 in his four starts since rejoining the Bruins this month with a 5-3 loss to the Ducks on Monday night. Rask allowed five goals on just 27 shots faced, sinking Boston’s chances in what ended up as just the Bruins’ third loss of the month. Never one to shy away from a bad performance, Rask spoke with the media after the game and matter-of-factly explained his level of play. “Obviously,” Rask said, “I...
NHL・2 DAYS AGO
Sportsnaut

Nico Sturm had a goal and two assists, Connor Dewar scored his first career goal and had an assist, and
NHL・2 DAYS AGO
Itemlive.com

This past week, the Boston Bruins honored Willie O’Ree by retiring his No. 22 and lifting it high into the TD Garden rafters. But that is not enough. O’Ree was The post Minton: The NHL needs to retire Bruins legend Willie O’Ree’s number appeared first on Itemlive.
NHL・2 DAYS AGO
CBS LA

NEW YORK (AP) — Adam Fox scored the deciding goal in the sixth round of a shootout and the New York Rangers beat the Los Angeles Kings 3-2 on Monday night for their ninth win in 12 games. Chris Kreider got his NHL-leading 30th goal, Barclay Goodrow also scored and Artemi Panarin had two assists as New York won its fifth straight at home. Igor Shesterkin stopped 28 shots to pick up his 20th win of the season. Blake Lizotte and Alex Iafallo scored in the second period for Los Angeles. Jonathan Quick stopped 34 shots as the Kings lost for the...
NHL・2 DAYS AGO
WEEI Sports Radio

Erik Haula has played well centering Taylor Hall and David Pastrnak so far, but the Boston Bruins could still be in the market for a second-line center upgrade before the trade deadline. Here are five potential targets.
NHL・1 DAY AGO
Sportsnaut

The Dallas Stars chase their fourth consecutive win when they visit the New Jersey Devils on Tuesday night. Dallas travels
NHL・2 DAYS AGO