Viktor Arvidsson and Arthur Kaliyev also scored, Anze Kopitar had three assists, and Cal Petersen made 30 saves for the Kings, who had lost four in a row to start a seven-game homestand.

Michael Del Zotto and Connor Brown scored, and Filip Gustavsson made 33 saves for the Senators, who have lost five in a row and are 1-10-1 in their past 12 games.

Petersen had five saves and the Kings blocked three shots during a five-minute power play by Ottawa that began with 6:09 left in the third after Kings forward Brendan Lemieux was penalized for misconduct after appearing to bite the hand of Ottawa forward Brady Tkachuk during a scrum.

Grundstrom then sealed the win when he scored into an empty net with 34 seconds left for a 4-2 lead.

Arvidsson redirected a centering pass from Kopitar while on a power play to give the Kings a 1-0 lead at 4:59 of the first period.

Del Zotto, a healthy scratch the previous two games, tied it at 1-1 with 19 seconds left in the opening period. His wrist shot from above the left circle nicked off the stick of Los Angeles forward Alex Iafallo and into the net. 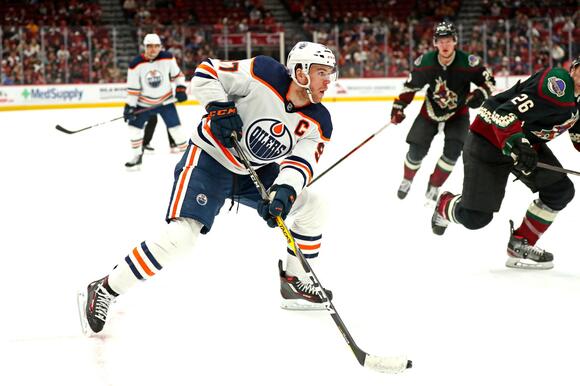 Grundstrom whiffed on a centering pass while driving through the slot, but Ottawa left wing Zach Sanford pushed him from behind and into Gustavsson. Just as they collided, the puck slid across the goal line.

Los Angeles quickly added to its lead when Kaliyev redirected a diagonal pass from Alexander Edler while near the right post to make it 3-1 at 13:14 of the second period.

Ottawa scored late for the second straight period to cut the lead to 3-2 at 18:33 of the second. Brown brought the puck down the right side and beat Petersen between his pads for the unassisted goal.

In their first matchup since Feb. 18, 2020, the Buffalo Sabres upended the Ottawa Senators at the Canadian Tire Centre by a final score of 3-1. Kyle Powell has a complete game recap:
NHL・11 HOURS AGO
San Diego Union-Tribune

Victor Hedman had two goals and an assist, Nikita Kucherov extended his scoring tear since returning from injury and the Tampa Bay Lightning topped the Los Angeles Kings 6-4 for their fourth straight win
NHL・6 HOURS AGO
NHL

Shorthanded Bolts win a wild one in Los Angeles

Tampa Bay played down two skaters on Tuesday but still defeated the Kings 6-4 The Lightning showed impressive resiliency on Tuesday night, as they opened their three-game California road trip with a wild 6-4 victory over the Kings at Crypto.com Arena. Box Score | Highlights. Things got off to an...
LOS ANGELES, CA・7 HOURS AGO

Victor Hedman had two goals and an assist for the short-handed Tampa Bay Lightning, who earned a 6-4 win over
NHL・7 HOURS AGO
Sportsnaut

The NHL season officially started back on October 12. In this article, we track all the NHL games today as
NFL・1 HOUR AGO
USA TODAY

Joonas Donskoi, who has yet to score a goal this season, netted the clincher in a shootout as the Seattle
NHL・1 DAY AGO
Sportsnaut

In their latest game, the Vancouver Canucks received a jolt from both Elias Pettersson and their sputtering power play in
NHL・1 DAY AGO
Praise 106.1

The jersey retirement ceremony will take place on the anniversary of his NHL debut.
NHL・2 DAYS AGO
Sportsnaut

Toronto Maple Leafs defenseman Jake Muzzin will miss the team’s visit to New York after being diagnosed with a concussion.
NHL・18 HOURS AGO
San Diego Union-Tribune

The Boston Bruins retired Willie O’Ree’s number 22 before Tuesday night’s game against the Carolina Hurricanes. O’Ree was the first Black player in the NHL, breaking the color barrier in 1958.
NHL・12 HOURS AGO
thesuntimesnews.com

The Dexter hockey team snapped a six-game losing streak with a 4-3 overtime win over Bedford Saturday night. Jonathan Rosevelt put the Dreadnaughts on top with an even-strength goal in the first period. Dylan Hutchison made it 2-0 with a goal at 14:01 of the second, but Bedford would rally...
HOCKEY・2 DAYS AGO
San Diego Union-Tribune

Centers Steven Stamkos of the Tampa Bay Lightning, Nazem Kadri of the Colorado Avalanche and Mika Zibanejad of the New York Rangers, and Anaheim winger Troy Terry have won the final roster spots for the NHL's All-Star Weekend as a result of fan voting
NHL・14 HOURS AGO