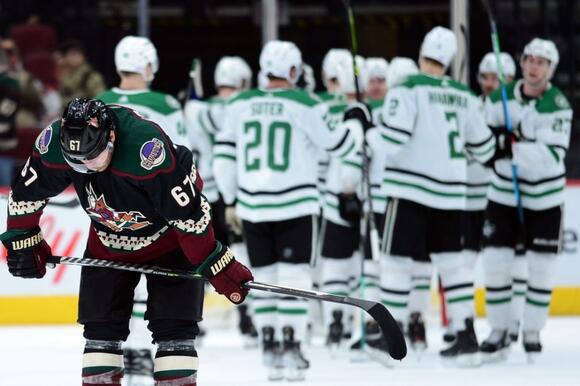 Jason Robertson tallied the game-winning goal and added an assist as the Dallas Stars claimed their fourth straight win Saturday in a 3-2 decision over the Arizona Coyotes in Glendale, Ariz.

Robertson broke a 2-2 tie midway through the second as the Stars won for the sixth time in their past seven games.

Roope Hintz netted his team-leading seventh goal, and Jacob Peterson tallied once. Joe Pavelski dished out two assists for the Stars, who are 7-3-1 in November.

Out of the starting lineup with a lower-body injury since facing Nashville on Nov. 10, goalie Braden Holtby returned in a starting role and allowed two goals on the 27 shots he faced.

Holtby played 7:22 of relief in his club’s 3-1 win over the Colorado Avalanche on Friday night after starter Jake Oettinger was shaken up in a collision.

Travis Boyd found the net for the third straight game, and Antoine Roussel added a goal for Arizona, which dropped to 2-6-1 on home ice. Scott Wedgewood stopped 26 of 29 shots and fell to 3-5-2.

The Stars have only lost once in their past 13 games (12-1-0) against Arizona dating back to the 2015-16 season. In the first of their four meetings this season, it took less than a minute for Dallas to grab a 1-0 advantage.

Related: If you’re a fan of the Stars, check out #GoStars rumors, rankings, and news here .

Hintz put a shot on goal from the left circle and the rebound bounced past Pavelski in the low slot. Hintz swooped around to the right and flipped home his seventh goal just 54 seconds in.

Three minutes later, a puck hit Loui Eriksson in tight and bounced high, and Roussel batted in his second tally after waiting for it to drop to the crossbar’s height. A short review by the officials confirmed the play was not hit in by a high stick.

However, Peterson helped the Stars regain momentum late by producing his third marker at 18:36 after Radek Faksa shoveled a shot on Wedgewood.

At 4:24 of the second, Boyd tipped a shot by Kyle Capobianco, and the puck hopped past Holtby for a 2-2 tie.

Near the midpoint of the period, Andrej Sekera’s sweet pass to the far post was easily sent into the open net by Robertson for the tiebreaking goal — his fifth.

In the third, Holtby produced seven saves to lock down the win for Dallas, which now returns to Texas for a three-game homestand.

The National Hockey League on Wednesday announced scheduling updates for the 98 games postponed between mid-November and Jan. 18, including the new dates for five previously postponed Arizona Coyotes games and one date change for a game that has yet to be played.  The Coyotes will play five rescheduled games in February including...
NHL・1 DAY AGO
Sportsnaut

While their struggles on the road continue, the Dallas Stars will try to maintain their dominance on home ice when
NHL・2 DAYS AGO

The NHL season officially started back on October 12. In this article, we track all the NHL games today as
NFL・9 HOURS AGO
Sportsnaut

Luka Doncic scored a season-best 41 points and made a crucial 3-pointer with 1:01 to play as the Dallas Mavericks
NBA・19 HOURS AGO
Sportsnaut

None of the kids recognized the elderly man when he first entered Raleigh’s Chavis Community Center in November 1999. A hockey player? He didn’t look like a hockey player. Certainly not like the hockey players the kids might have seen with the Carolina Hurricanes — or on TV.
NHL・2 DAYS AGO
97.1 The Ticket

At 5’10, Smith doesn’t boast the size of his 6’2 younger brother, but he does have a more proven offensive track record. He also plays center.
NHL・1 DAY AGO

After the first 20 minutes, it seemed as if the Vegas Golden Knights were going to coast to victory in
NHL・2 DAYS AGO
Sportsnaut