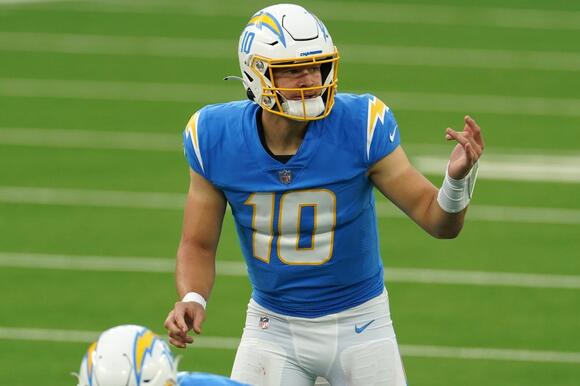 Discover player props odds, plays, and insights for Justin Herbert in his Week 12 contest with the Los Angeles Chargers against the Denver Broncos.

Justin Herbert will have several player props available when he takes to the field on Sunday at 4:05 PM ET live on CBS. Herbert and the Los Angeles Chargers (6-4) are set for an AFC West matchup in Week 12 against the Denver Broncos (5-5) at Empower Field at Mile High in Denver, Colorado.

The 2021 NFL Rookie of the Year candidates are settled. Ja’Marr Chase put past drop issues to bed long ago
NFL・19 HOURS AGO
Audacy

Chargers quarterback Justin Herbert was spotted playing a pickup basketball game back at Oregon. However, his opponents appeared to be significantly overmatched, with Herbert easily slamming a massive dunk over his opponents’ heads.
NFL・1 DAY AGO
On3.com

The Kansas City Chiefs are releasing wide receiver Josh Gordon. Gordon was signed by the Chiefs this season, getting another shot in the NFL. But now, Gordon, who has not been active for recent games, is off of the active roster. NFL Network’s Tom Pelissero reported that the Chiefs intend...
NFL・2 DAYS AGO
The Spun

Just days after the end of the Green Bay Packers’ season, the team has added a quarterback to their QB room. According to NFL reporter Dov Kleiman, the Packers have signed former LSU product Danny Etling. “Packers signed a new QB,” Kleiman tweeted. “Former Patriots Danny Etling, per his...
NFL・1 DAY AGO

49ers defensive coordinator DeMeco Ryans could emerge as a top head-coaching candidate with the Minnesota Vikings, as a former SF executive could be the general manager.
NFL・1 DAY AGO
ClutchPoints

Los Angeles Rams quarterback Matthew Stafford got into a bit of a dust-up with Tampa Bay Buccaneers defensive tackle Ndamukong Suh during their NFC divisional round clash. Stafford and Suh were teammates for five seasons with the Detroit Lions, but it appears the two aren’t exactly on good terms.
NFL・19 HOURS AGO
The Spun

Rob Gronkowski Names The Toughest Player He’s Ever Played Against

Earlier this week, Tampa Bay Buccaneers tight end Rob Gronkowski made headlines with a tweet about his potential future. “Year 11 in the books. What a ride it’s been,” Gronkowski tweeted. “Grateful to the Bucs for giving me an opportunity to play another year. To my teammates, thank you for giving everything you had. The sweat we shed & memories made will never be forgotten. Thanks to the #Krewe too. Year 12???”
NFL・22 HOURS AGO
On3.com

Aaron Rodgers‘ season ended on Saturday in shocking fashion, as the Green Bay Packers lost 13-10 to the San Francisco 49ers in the divisional round of the NFL Playoffs, sending Rodgers into an offseason full of mystery much earlier than expected. Now, as Rodgers could be on his way...
NFL・1 DAY AGO

Tennessee legend Peyton Manning was a ballyhooed recruit in 1993. On one Sunday, he fielded 23 calls from coaches. Now, nephew Arch has the spotlight.
NFL・2 DAYS AGO
USA TODAY Sports Media Group

The Baltimore Ravens ended their 2021 season on a six-game losing streak and now turn their attention to the 2022 offseason. They will have many opportunities to improve their roster over the coming months, as they have a few big needs that need to be taken care of. One position...
NFL・1 DAY AGO
The Spun

Buccaneers head coach Bruce Arians doesn’t want quarterback Tom Brady to feel rushed in making a decision for next season. There have been numerous rumors the last few days on how Brady may call it a career after this season, but there’s been no formal announcement. Arians confirmed...
NFL・2 DAYS AGO
Sports Illustrated

In an appearance on the SI Media Podcast, Joe Buck of Fox Sports broke down a viral moment from this year's playoffs that originated on one of his broadcasts. Buck's partner and former Cowboys quarterback Troy Aikman caught the attention of football fans across the country when he gave a subtle shot to their assignment for the day. The duo were calling the Buccaneers-Eagles game on Jan. 16 that ended up being a dull affair. Meanwhile, CBS would get the Cowboys-49ers game later in the day.
NFL・17 HOURS AGO

The Denver Broncos are reportedly narrowing their head coaching candidates list and Dallas Cowboys defensive coordinator Dan Quinn might be emerging as the frontrunner. Quinn, who previously coached the Atlanta Falcons, making a Super Bowl, helped turn around the Cowboys defense in 2021. The Cowboys had multiple defensive stars in...
NFL・2 DAYS AGO
The Spun

A stunning development has entered the mix in the Caleb Williams sweepstakes, according to a new report. It was previously believed USC was far and away the favorite to land the former Oklahoma quarterback. Then LSU reportedly entered the fray. Now, it’s a Big Ten team’s turn to try and land the five-star transfer.
COLLEGE SPORTS・1 DAY AGO
The Spun

The Las Vegas Raiders are one of nine franchises still looking for a new head coach, and they apparently are interested in Todd Bowles. Bowles has spent the last three seasons as the defensive coordinator with the Tampa Bay Buccaneers. He also held that role with the Arizona Cardinals in 2013-14.
NFL・1 DAY AGO
Sportsnaut

A number of NFL futures bets can be placed throughout the 2021 NFL season, but Super Bowl odds are where
NFL・19 HOURS AGO
ClutchPoints

Matthew Stafford and the Los Angeles Rams could be in a familiar annoying situation come Sunday when they play the San Francisco 49ers in the NFC title game. To recall, back in Week 18, the Rams also hosted the 49ers at SoFi Stadium. Unfortunately for the home team, it turned out to be like a road game because of the number of San Francisco fans who traveled to watch and cheer for their Niners.
NFL・15 HOURS AGO
Sportsnaut

Super Bowl 2022: The Tampa Bay Buccaneers are the reigning NFL champions, but who'll make the playoffs — and lift the Lombardi Trophy at the end of this season?
NFL・17 HOURS AGO
ClutchPoints

The Kansas City Chiefs pulled off what was seemingly impossible when they stunned the Bills in overtime on Sunday night in the AFC Divisional Round. With just 13 seconds on the clock, the Chiefs managed to get into field goal range and tie the game up, forcing overtime. Travis Kelce was the X-factor late in the game, with his fourth-quarter reception setting up Harrison Butker’s game-tying kick. Well, Kelce and Mahomes spoke on the pivotal play after the game and revealed that Kelce’s route was actually improvised.
NFL・1 DAY AGO
Falcon Report