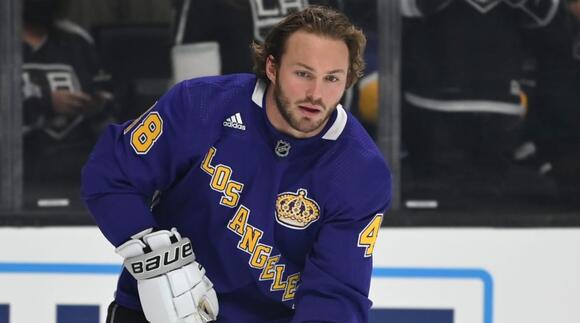 After the fight, Tkachuk can be seen showing his hand to officials.

Senators winger Brady Tkachuk accused Kings winger Brendan Lemieux of biting him on Saturday after the two brawled in the third period. Lemieux went on to be ejected for biting after the strange sequence.

The altercation ensued after Tkachuk shoved Kings forward Blake Lizotte with 6:09 remaining in the third period. Lemieux then came into the mix to defend his teammate and the two began to brawl on the ice while tangled with officials.

While the two skirmished, Tkachuk can be seen shoving his hand in the Kings winger's face. After the two were separated, Tkachuk showed officials his hand while on the way to the penalty box. Both players were assessed roughing penalties and Lemieux was dealt a five-minute match penalty. He was ultimately ejected.

Both players's fathers fought each other during the 1996 World Cup of Hockey. Los Angeles would go on to win 4–2.

Centers Steven Stamkos of the Tampa Bay Lightning, Nazem Kadri of the Colorado Avalanche and Mika Zibanejad of the New York Rangers, and Anaheim winger Troy Terry have won the final roster spots for the NHL's All-Star Weekend as a result of fan voting
NHL・2 DAYS AGO
Sportsnaut

Darcy Kuemper had 40 saves, Mikko Rantanen had a goal and an assist, and the visiting Colorado Avalanche beat the
NHL・6 HOURS AGO
Los Angeles Times

Anze Kopitar had a power-play goal and Jonathan Quick made 23 saves in the Kings' 4-1 loss to the Avalanche. L.A.'s Quinton Byfield makes season debut.
NHL・6 HOURS AGO

Schwartz: Islanders ready for a lot of hockey in a short amount of time

The NHL’s schedule update re-scheduled 13 Islanders games, and they will play 43 games in 80 days coming out of the All-Star Break - but they’re going to take it one day at a time.
NHL・15 HOURS AGO
Sportsnaut

The NHL will play 95 games from Feb. 7-22 as part of a comprehensive update to the 2021-22 regular-season schedule announced Wednesday. The update would allow all 32 teams to complete their 82-game schedule by the season’s original end date of April 29. The three-week window in February was previously designated as a pause in […] The post NHL announces extensive updates to 2021-22 regular-season schedule appeared first on The Southern Maryland Chronicle.
NHL・17 HOURS AGO
Sportsnaut

It’s the Buffalo Sabres and the Ottawa Senators squaring off for the first time since Feb. 18, 2020. The blue and gold are looking to get their minds off blowing a two-goal, third period lead yesterday afternoon to the Detroit Red Wings.
NHL・2 DAYS AGO
USA TODAY

In their first matchup since Feb. 18, 2020, the Buffalo Sabres upended the Ottawa Senators at the Canadian Tire Centre by a final score of 3-1. Kyle Powell has a complete game recap:
NHL・2 DAYS AGO