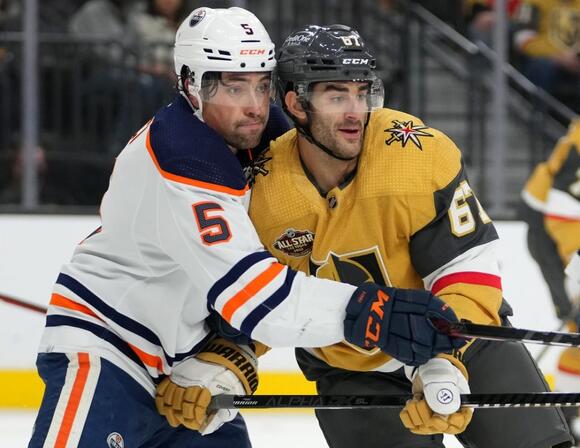 Mikko Koskinen tied his season-high with 36 saves to lead the Edmonton Oilers to a 3-2 victory over the Vegas Golden Knights on Saturday in Las Vegas.

Ryan Nugent-Hopkins, Zach Hyman and Jesse Puljujarvi scored goals for Edmonton, which won despite its leading scorers Leon Draisaitl and Connor McDavid getting blanked on the scoresheet.

Koskinen improved to 11-2-0 with the victory.

Koskinen was brilliant at the start of the game when the Golden Knights swarmed the net, making several grade A stops, including a glove save on a point-blank shot by Jonathan Marchessault.

But Edmonton outshot Vegas 11-1 over the final 7:50 of the period while taking a 2-0 lead. Nugent-Hopkins got the first goal at the 17:50 mark, beating Lehner on his blocker side at the end of a two-on-one break following a turnover by Max Pacioretty.

Hyman followed with his ninth goal of the season at the 19:44 mark after a turnover by Mark Stone, breaking in and beating Lehner with a backhand shot.

Related: If you’re a fan of the Oilers, check out #EdmontonOilers rumors, rankings, and news here .

Puljujarvi made it 3-0 in the second period when he broke behind the Vegas defense and scored on a clean breakaway with a wrist shot through Lehner’s 5-hole for his seventh goal of the season and first in nine games.

Stephenson put the Golden Knights on the scoreboard with his eighth goal of the season, taking a pass from Stone on the rush and backhanding a shot under Koskinen’s glove.

Smith cut it to 3-2 early in the third period with his ninth goal of the season and seventh in nine games when Marchessault’s rebound shot deflected in off his skate and inside the left post.

Vegas pulled Lehner for an extra attacker but managed just one shot, a snapshot from the left circle by Alex Pietrangelo that Koskinen knocked away with his blocker.

Now that the 2021-22 season is about half of the way through, and Covid is ravaging many clubs, it’s time
NHL・21 HOURS AGO
prohockeyrumors.com

What Your Team Is Thankful For: Vegas Golden Knights

In the spirit of the holiday season, PHR will take a look at what teams are thankful for as the season approaches the midway mark. There also might be a few things your team would like down the road. We’ll examine what’s gone well in the early going and what could improve as the season rolls on for the Vegas Golden Knights.
NHL・2 DAYS AGO
Sportsnet.ca

What's up with the Edmonton Oilers? Analyzing an extended slump

What’s going wrong for the Oilers? The easier question, and shorter answer, may be finding what’s right. Edmonton has a generational talent in Connor McDavid and one of the best scorers in the league in Leon Draisaitl. But it’s not enough to propel them to a Stanley Cup. That’s nothing new, though -- this has been the story throughout both of their tenures, really.
NHL・1 DAY AGO
vegashockeynow.com

The Vegas Golden Knights are one game off from the halfway mark of the 2021-22 NHL season. They currently sit first in the Pacific Division with 48 points in their 40 games played. For the most part, the team has had a successful season so far with a winning record despite injuries and a current spot in the Stanley Cup Playoff picture.
NHL・17 HOURS AGO

When Boston hosts the Carolina Hurricanes on Tuesday night, the Bruins will retire the No. 22 of Hall of Fame
NHL・1 DAY AGO
Sportsnaut

Joonas Donskoi, who has yet to score a goal this season, netted the clincher in a shootout as the Seattle
NHL・1 DAY AGO
Sportsnaut

If you’re looking for fantasy hockey tips for the games ahead, you have come to the right place. As the
NHL・23 HOURS AGO
NewsOne

The jersey retirement ceremony will take place on the anniversary of his NHL debut.
NHL・2 DAYS AGO

After the first 20 minutes, it seemed as if the Vegas Golden Knights were going to coast to victory in
NHL・1 DAY AGO
Sportsnaut

Toronto Maple Leafs defenseman Jake Muzzin will miss the team’s visit to New York after being diagnosed with a concussion.
NHL・21 HOURS AGO
Sportsnaut

Despite a slew of COVID-19 postponements, the interruptions have hardly stopped Auston Matthews’ ability to score goals — especially in
NHL・21 HOURS AGO
WEEI Sports Radio

Carolina Hurricanes forward was asked on Tuesday if he sees similarities between himself and Boston Bruins star Brad Marchand. Marchand responded by saying that’s like “comparing a Lambo to a Prius.”
NHL・21 HOURS AGO
WEEI Sports Radio

The Boston Bruins retired Willie O’Ree’s number 22 before Tuesday night’s game against the Carolina Hurricanes. O’Ree was the first Black player in the NHL, breaking the color barrier in 1958.
NHL・16 HOURS AGO
KOAA News 5 Southern Colorado

Avs forward Nazem Kadri is headed to the NHL All-Star Game after all after getting voted in by fans through the “Last Men In” vote.
NHL・18 HOURS AGO
KREX