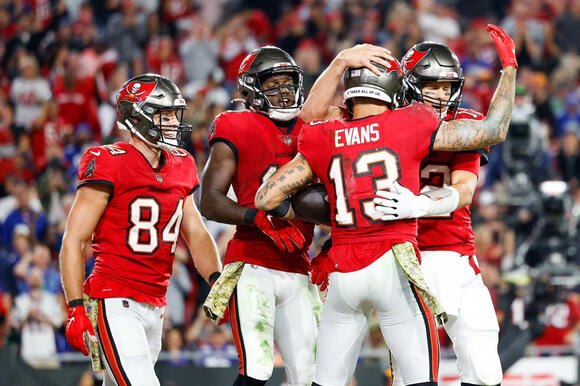 Discover player props odds, plays, and insights for Mike Evans in his Week 12 contest with the Tampa Bay Buccaneers against the Indianapolis Colts.

Mike Evans will have several player prop bets available when he hits the field on Sunday at 1:00 PM ET live on FOX. Evans and the Tampa Bay Buccaneers (7-3) square off against the Indianapolis Colts (6-5) in Week 12 at Lucas Oil Stadium.

Tom Brady could use a boost from the Tampa Bay Buccaneers defense that was so essential during the stretch run to winning the last Super Bowl.
NFL・2 DAYS AGO
Sportsnaut

The 2021 NFL regular season is over and playoffs are in full swing, which brings us to one of our
NFL・6 HOURS AGO
Newsweek

How to Watch NFL Division Round Games 2022: Pairings, Times and TV Options

The second round will kick off Saturday (Jan. 22) with top seeds Green Bay and Tennessee each hosting divisional round games.
NFL・2 DAYS AGO
USA TODAY

Eagles' Jalen Hurts, in a walking boot, determined to close the gap with Tom Brady, Buccaneers

The first playoff experience for QB Jalen Hurts ended rather quickly and emphatically as the reigning Super Bowl champs trounced the Eagles.
NFL・2 DAYS AGO

Tom Brady shone as his quest for an eighth Super Bowl title continued with the Tampa Bay Buccaneers easing into week two of the play-offs courtesy of a routine victory over the Philadelphia Eagles.The reigning NFL champions made light work of the challenge ahead of them, running out 31-15 winners in the wildcard round.Two unanswered touchdowns on short runs from first Giovani Bernard and then Ke’Shawn Vaughn had the Bucs well ahead, leading 17-0 at half-time before Brady took centre stage..@MikeEvans13_ goes flipping into the end zone! #GoBucs 📺: #PHIvsTB on FOX📱: NFL app pic.twitter.com/UuUj1l70ie— NFL (@NFL) January 16, 2022The...
NFL・2 DAYS AGO
ClutchPoints

Los Angeles Rams offensive tackle Aaron Donald couldn’t care less about what Tom Brady achieved during the 2021 regular season or even throughout his career. As the Rams gear up for their divisional round showdown with the Tampa Bay Buccaneers, Donald made sure to remind Brady and everyone else that the regular season and past achievements don’t matter that much in the postseason.
NFL・21 HOURS AGO
Sportsnaut

At the ripe age of 44, Tampa Bay Buccaneers quarterback Tom Brady is doing things that those 20 years younger
NFL・1 DAY AGO
FanSided

The Buccaneers face off against the Rams in the next round of the playoffs at home, and L.A. should be far from full strength. The playoffs are here and the first round is in the books. The Buccaneers and the Rams took care of business in their playoff openers, and the rematch from the regular season this weekend is sure to be a spectacular affair.
NFL・1 DAY AGO

The future of the Las Vegas Raiders is uncertain. Despite overcoming immense obstacles on the way to a playoff berth, interim head coach Rich Bisaccia is far from a lock to stay with the team. And with quarterback Derek Carr’s contract expiring soon, he could become a trade asset if the Raiders choose not to commit to him.
NFL・1 DAY AGO
Sportsnaut

The NFL MVP odds have received their final update now that the 2021-22 NFL regular season is in the books.
NFL・8 HOURS AGO
24/7 Wall St.

After Super Wild Card Weekend, just eight teams remain in the NFL playoffs. The teams that won their divisions and earned home field advantage continued to play well, and just one Wild Card team was able to pick up a road playoff win. All eight teams are just three victories away from being crowned Super […]
NFL・1 DAY AGO
Sports Illustrated

Joe Burrow and Matthew Stafford are the quarterbacks to target in the 2022 NFL playoffs divisional round.
NFL・10 HOURS AGO

As the offseason begins for some teams, the prognostication starts. This writer had a very bold take about Tom Brady and the Buccaneers. Tom Brady is currently defying all logic during his time with the Buccaneers. Winning the Super Bowl last season and putting together an MVP-worthy campaign as the oldest player in the league by a healthy margin shows just how high Brady can go.
NFL・7 HOURS AGO
Sportsnaut

Can the Tampa Bay Buccaneers win back-to-back Super Bowls? Find out how the 2021 schedule sets up nicely for Tom Brady and Co. to make another title run.
NFL・3 HOURS AGO
Sportsnaut

NFL TV ratings, a look forward: The NFL Playoffs have arrived, following a 2021 regular season that saw interest in
NFL・1 HOUR AGO
Sportsnaut

Tampa Bay WR Mike Evans on Rams: ‘We Got the Rematch at Home Like We Wanted’

During the 2020 postseason, Tampa avenged two of its regular season losses en route to its Super Bowl title. Can it happen again?
NFL・3 HOURS AGO
Sportsnaut

For 18 seasons, Ben Roethlisberger has been the face of the Pittsburgh Steelers’ franchise. He’s earned two Super Bowl titles
NFL・2 DAYS AGO