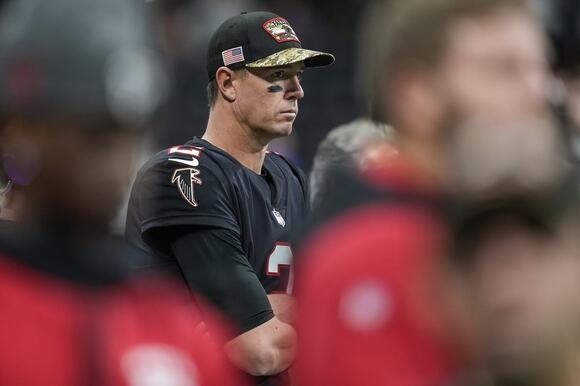 Discover player props odds, plays, and insights for Matt Ryan in his Week 12 contest with the Atlanta Falcons against the Jacksonville Jaguars.

Before placing any bets on Matt Ryan's player prop betting options for Sunday's game, which starts at 1:00 PM ET on CBS, here are some key stats and trends to know. This Week 12 matchup sees Ryan's Atlanta Falcons (4-6) hit the field against the Jacksonville Jaguars (2-8) at TIAA Bank Field in Jacksonville, Florida.

Ben Roethlisberger played what will likely be his final game in the NFL as the Steelers were blown out by the Kansas City Chiefs in the wildcard round. Ben’s final season should be a warning not only to the Atlanta Falcons but to the rest of the league. With...
NFL・1 DAY AGO
USA TODAY

The Dallas Cowboys continue to be a topic of conversation days after their NFC Wild Card defeat to the San Francisco 49ers.
NFL・1 DAY AGO
Sportsnaut

When modern football fans think of the Atlanta Falcons, quarterback Matt Ryan is likely one of the first names that
NFL・2 DAYS AGO
92.9 The Game

Tori McElhaney joined Chris and Harry to discuss the biggest areas of need going in to the 2022 NFL offseason. She says the Falcons have to fix the pass rush.
NFL・21 HOURS AGO
Falcon Report

A bidding war for him by AFC teams like the Patriots, Jets and Dolphins? That can help bump up the return on a trade. But …
NFL・2 DAYS AGO
Falcon Report

Dallas Cowboys owner and de facto general manager Jerry Jones is frustrated with a whole lot of things after his team's disappointing opening-round playoff loss to the San Francisco 49ers. Among the things disappointing him at the moment is wide receiver Amari Cooper. "Amari Cooper should take half the field...
NFL・1 DAY AGO
The Spun

On Friday night, five-star quarterback recruit Arch Manning had the best college football coach in the country – and his top assistants – at his high school basketball game. Manning, the No. 1 quarterback recruit in the 2023 class, is also a star on the hardwood. Alabama coach...
COLLEGE SPORTS・20 HOURS AGO
BuckeyesNow

The Pittsburgh Steelers will have a quarterback competition on their hands for the first time in nearly two decades, and head coach Mike Tomlin expects former Ohio State signal-caller Dwayne Haskins to battle Mason Rudolph this offseason for the right to be Ben Roethlisberger’s immediate successor. “Both guys have...
NFL・21 HOURS AGO
Insider

Just eight teams remain in the fight for Super Bowl LVI. This week, we're backing the Packers and Chiefs to cover the spread.
NFL・2 DAYS AGO

The virus caused a shift in the broadcast pairing for the network during this weekend's divisional round game.
NFL・1 DAY AGO
Sports Illustrated

It was a complete nightmare of a game for Green Bay’s special teams during Saturday night’s loss to the 49ers, right down to the final play.
NFL・10 HOURS AGO
Sportsnaut

Aaron Rodgers and the Green Bay Packers entered the playoffs as the strong favorite to win the Super Bowl. But
NFL・10 HOURS AGO
USA TODAY

With a trip to the AFC championship game on the line, Bengals kicker Evan McPherson had no doubts after his 52-yard field goal.
NFL・13 HOURS AGO

The quarterback is not a fan of Cincinnati being known as underdogs.
NFL・12 HOURS AGO
The Spun

Mike Vrabel refused to throw his quarterback under the bus following the Tennessee Titans’ embarrassing loss to the Cincinnati Bengals on Saturday afternoon. Ryan Tannehill, the 33-year-old veteran, was awful in the Titans’ 19-16 loss to the Bengals. He threw three picks during the outing, two of which led to field goals by Cincinnati.
NFL・12 HOURS AGO
Sportsnaut

The 2021 season for the Arizona Cardinals season finale was about as ugly as it gets. Maybe there would be
NFL・2 DAYS AGO
hotnewhiphop.com

Skip Bayless Has A Strong Warning For Aaron Rodgers

This weekend is the Divisional Round for the NFL Playoffs, and there are some pretty big matchups. In the AFC, we have the Cincinnati Bengals against the Tennessee Titans and the Buffalo Bills against the Kansas City Chiefs. In the NFC, the Los Angeles Rams are taking on the Tampa Bay Buccaneers, all while the Green Bay Packers will take on the San Francisco 49ers.
NFL・1 DAY AGO