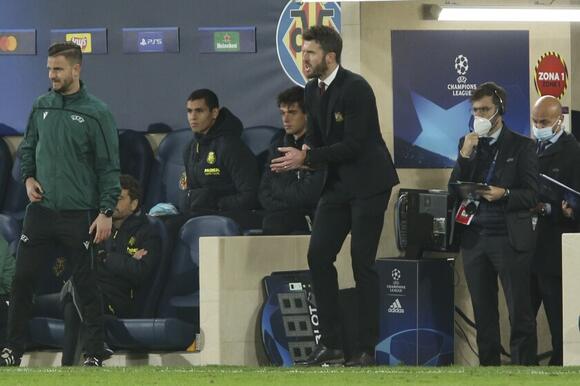 For what could be his final game in temporary charge of Manchester United, Michael Carrick takes his team to Premier League leader Chelsea in the headline match of the 13th round. Carrick's only match as interim manager was a 2-0 win at Villarreal in the Champions League. He could soon be replaced by German coach Ralf Rangnick, who has been in talks with United. Manchester City came into the weekend three points behind Chelsea and plays before the leader, at home to West Ham. Having criticized the standard of the Tottenham squad he has inherited following an embarrassing loss in the Europa Conference League, Antonio Conte takes his team north for an away match at Burnley. Also, Watford manager Claudio Ranieri returns to Leicester, the team he surprisingly led to the title in 2016, and Brentford hosts Everton.

Sevilla’s visit to leader Real Madrid is the highlight match on a day when the league’s top four teams are all in action. Sevilla enters the match at Santiago Bernabéu Stadium in third place at two points back. Carlo Ancelotti will once again entrust Madrid's attack to Karim Benzema and Vinícius Júnior with Eden Hazard still out recovering from a stomach virus and Gareth Bale still injured. Sevilla will likely also be without several injured players, including midfielder Suso and striker Youssef En-Nesyri. Second-place Real Sociedad is just a point behind Madrid and will play earlier at Espanyol hoping to move to the top of the table. Atlético Madrid is in fourth before it visits Cádiz looking to bounce back from its home loss to AC Milan in the Champions League this week. Sixth-place Real Betis has won two straight by a combined score of 5-0 — it hosts last-place Levante, the only winless side.

After enduring their first league losses last weekend, Napoli and AC Milan will endeavor to get back on track in Serie A. The teams share the lead, one point ahead of third-placed Inter Milan. Napoli hosts Lazio, shortly after Milan welcomes Sassuolo. Roma will be looking to close the gap on the top four with a win over Torino. At the other end of the table Udinese hosts fellow struggler Genoa, while Spezia welcomes Bologna.

Leipzig hosts Bayer Leverkusen in the Bundesliga’s first game without fans for months due to spiraling coronavirus infections in the state of Saxony. The home team will be without a host of players due to infections, too. The club says it had six more positive test results for COVID-19, adding to the three previous cases it reported in midweek . Coach Jesse Marsch is among those infected, though it didn’t stop the team routing Belgian club Brugge 5-0 in the Champions League on Wednesday. Eintracht Frankfurt plays Union Berlin for the early game in Frankfurt, where up to 40,000 spectators are permitted.

Paris Saint-Germain looks to bounce back from losing at Manchester City 2-1 in the Champions League when the French league leader visits lowly Saint-Etienne. PSG will miss midfielders Marco Verratti and Ander Herrera through injuries. Third-place Rennes is becoming a serious contender in the race for Champions League spots. On a 12-game unbeaten run in all competitions, Rennes visits a Lorient side which has lost its last three games. A week after its game against Marseille was abandoned, mid-table Lyon visits Montpellier. Meanwhile, fifth-place Marseille needs a win over struggling Troyes to make up ground in the race for Champions League spots.

A look at what’s happening in European soccer on Tuesday:. Chelsea plays away at Brighton with club-record signing Romelu Lukaku struggling for fluency in front of goal. The striker has only five goals in 14 Premier League matches since rejoining Chelsea. Chelsea manager Thomas Tuchel said: “He’s a key player, so there will always be pressure but not more pressure than he puts on himself.” Lukaku failed to find the net on Saturday when a 1-0 loss to Manchester City saw Chelsea slip 13 points behind the leader and drop to third place this weekend. Chelsea is the only current Premier League club that Brighton has yet to beat since promotion in 2017. Brighton drew at Stamford Bridge 1-1 at the end of December and is in ninth place. The Burnley-Watford match was postponed for a second time, this time because Burnley didn't have 13 available outfield players.
PREMIER LEAGUE・12 HOURS AGO

Athletic Club and Real Madrid will lock horns later this evening in Saudi Arabia in the final of the Supercopa de Espana. Athletic beat Atletico Madrid 2-1 on Thursday night to secure their place in the final, while Madrid beat Barcelona 3-2 the night before. Athletic are the holders of...
SOCCER・1 DAY AGO
The Independent

Rafael Benitez’s departure from Everton has thrown open another managerial vacancy and some interesting names are already being lined up to replace the 61-year-old Spaniard.Here, the PA news agency takes a look at some of the potential contenders to replace him.Wayne RooneyEngland and Manchester United’s leading goalscorer has endured a baptism of fire in his first managerial job at Derby and the temptation to return to his boyhood club could prove too strong to turn down should the call come. Everton have prised managers away from Premier League rivals in the past – Ronald Koeman from Southampton and Marco Silva...
PREMIER LEAGUE・1 DAY AGO

Pep Guardiola has insisted that Manchester City have not been 'luckier' than other Premier League clubs with Covid-19, despite Thomas Tuchel’s belief that it has been a deciding factor in the title race.Ahead of Chelsea's visit to the Etihad for Saturday's lunchtime kick-off, Tuchel said that "the biggest difference" between his side and City is that the defending champions have "dealt better with injuries and the Covid situation"."Maybe it is lucky, maybe they do it better, but they have fewer injuries to key players, fewer days out and weeks where they miss them. They did not suffer from Covid like...
PREMIER LEAGUE・2 DAYS AGO
The Guardian

Kevin De Bruyne scored a brilliant winner as Premier League leaders Manchester City moved 13 points clear with a 1-0 victory over second-placed Chelsea on Saturday.The Belgian playmaker, who had an unhappy spell at Chelsea early in his career, curled beyond Kepa Arrizabalaga from distance to settle a tight contest at the Etihad Stadium with 20 minutes remaining.It was a moment of magic worthy of winning any game but was the least City deserved having dominated against the side that beat them in last season’s Champions League final.Blue is the colour! 💙#ManCity pic.twitter.com/816nfRAo0M— Manchester City (@ManCity) January 15, 2022The win...
PREMIER LEAGUE・2 DAYS AGO
industryglobalnews24.com

The annual knockout football competition in Spain, Copa del Rey, abandoned its match on Saturday between Real Betis and Sevilla with the score of 1-1 after a pole was hurled from the stands and hit a player, Joan Jordan, from Sevilla’s side. The pole struck Jordan as the Betis...
SOCCER・19 HOURS AGO
Absolute Chelsea

Chelsea travel to Manchester to face Pep Guardiola's Man City in the early kick-off in the Premier League on Saturday. The hosts have won 11 straight matches, with Chelsea drawing six of their last 12. Thomas Tuchel has made several changes to his Chelsea starting XI ahead of the top...
PREMIER LEAGUE・2 DAYS AGO
The Independent

Cristiano Ronaldo and Lionel Messi were both included in the men’s world XI team of the year alongside Erling Haaland and Robert Lewandowski – winner of the men’s individual prize – in a front four.Fifpro’s 2021 team crowbarred in the attacking quartet, with a back three of Manchester City’s Ruben Dias alongside Bayern Munich’s David Alaba and Euro 2020 winner Leonardo Bonucci. Dias’s City teammate Kevin De Bruyne was named in midfield alongside Jorginho and N’Golo Kante. Meanwhile Barcelona players were surprisingly omitted from the women’s team, despite Barca and Spain midfielder Alexia Putellas winning the women’s player of the...
FIFA・13 HOURS AGO
The Independent

Steven Gerrard wants to keep Philippe Coutinho smiling after the Aston Villa debutant secured a hard-fought 2-2 draw that left Manchester United interim boss Ralf Rangnick deflated.Saturday evening’s Premier League encounter looked to be going the same way as their FA Cup tie at the start of the week, with Villa looking sharp but ultimately lacking a cutting edge against the Red Devils.A howler from Emiliano Martinez allowed Bruno Fernandes to open the scoring, with the Portuguese skipper adding another just as Villa threatened to level.Gerrard turned to former Liverpool team-mate Coutinho and got a dream response, with the Brazilian...
PREMIER LEAGUE・2 DAYS AGO
goal.com

Manchester United denied Birmingham City two wins on the bounce as they claimed a dominant 5-0 win in the Women’s Super League on Saturday. Birmingham came into the match off the back of a huge upset over league leaders Arsenal, but United made sure they didn’t have the same fate and came out firing.Marc Skinner’s side were 3-0 up after 20 minutes thanks to goals from captain Katie Zelem and Leah Galton, before the afternoon went from bad to worse for the visitors as Emily Ramsey hit in an own goal and Alessia Russo added a fifth with a strike...
SOCCER・2 DAYS AGO
San Diego Union-Tribune