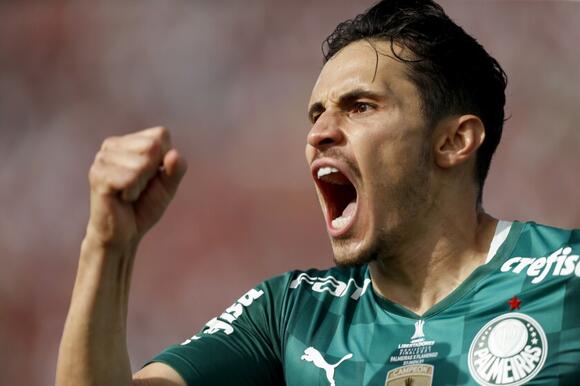 Palmeiras successfully defended the Copa Libertadores title after beating Flamengo 2-1 in an all-Brazilian final that went to extra time on Saturday.

The third title from the Sao Paulo-based club kicked off street parties in the metropolis, regardless of new concerns about COVID-19.

The champion opened the scoring at Centenario Stadium in Montevideo through Raphael Veiga early. Flamengo, which started the final as favorite, levelled in the second half thanks to Gabriel Barbosa. Substitute Deyverson netted the winner in the first half of extra time.

Palmeiras became the first team in 20 years to win back-to-back titles. Boca Juniors won in 2000 and '01, the first of those titles against Palmeiras in the final prevented the Brazilian side from retaining its first Copa title.

A counterattack started by defender Gustavo Gomez found right back Mayke free and onside thanks to Flamengo defender David Luiz. Mayke's low cross reached Raphael Veiga, and he put it past goalkeeper Diego Alves in the sixth minute.

Flamengo wasted opportunities in the second half, and didn't level until the 72nd, courtesy of its its top scorer Gabriel Barbosa. Assisted by Giorgian de Arrascaeta, the man nicknamed Gabigol scored from close range against goalkeeper Weverton, who was not quick enough to block the shot.

Barbosa scored both Flamengo goals in the 2-1 final win against River Plate in its second and last Copa triumph in 2019.

The 1-1 looked fair at the end of regular time. But it didn't take long for Palmeiras to regain the upper hand.

A slip by Flamengo midfielder Andreas Pereira in the 95th made the difference. Deyverson, who replaced a fatigued Veiga minutes before, carried the ball all by himself and calmly beat goalkeeper Alves.

Deyverson returned to Palmeiras in June after a loan to Alaves, and was in tears after his first goal in this Copa.

“I had ups and downs here, I made many mistakes, but I never stopped working,” the striker, once again in tears, said.

Deyverson signed a five-year contract with Palmeiras in 2017, but problems on and off the pitch led him to being loaned to Getafe in 2020 and Alaves shortly later. Many Palmeiras fans did not enjoy the news of his return.

Deyverson surprised fans and players alike near the final whistle when he fell to the ground after being lightly touched on the back by Argentine referee Nestor Pitana. Pitana laughed at the player's reaction and told him to stand up. Deyverson's rolls on the pitch went viral on social media.

Flamengo goalkeeper Alves said they must congratulate Palmeiras and keep their heads up.

“It hurts a lot to lose it like this. We didn't give many opportunities to Palmeiras. They played in their style, we played in ours. It wasn't meant to be,” Alves said, adding midfielder Pereira should not be blamed for the defeat.

Brazil also contributed both finalists in the Copa Sudamericana, won by Athletico. This year marked the first time all four finalists of both Copas came from the same country. Palmeiras' success was the eighth since 2010 for a Brazilian club.

Palmeiras eliminated local rival Sao Paulo in the quarterfinals and advanced to the final on the away goal rule after drawing at Atletico Mineiro. This week, CONMEBOL scrapped the away goals rule for all future competitions.

Ralf Rangnick stood by his decision to substitute Cristiano Ronaldo despite the striker’s angry reaction during Manchester United’s 3-1 win at Brentford.Goals from Anthony Elanga, Mason Greenwood and Marcus Rashford boosted Manchester United’s top-four ambitions.But the spotlight was once again on Ronaldo, who was far from impressed when his number came up with 20 minutes left.The striker trudged off slowly before hurling his coat to the floor as he sat down muttering “why?”.However, United interim boss Rangnick said: “He was asking ‘why me’?. But I told him I take the decisions in the interest of the team.“We were 2-0 up...
PREMIER LEAGUE・1 DAY AGO
San Diego Union-Tribune

Newcastle have approached Manchester United about a loan deal for Jesse Lingard the PA news agency understands.The struggling Magpies have already spent around £37million this month thanks to their new owners, who are backed by the spending power of Saudi Arabia’s Public Investment Fund.Kieran Trippier has arrived from Atletico Madrid and striker Chris Wood joined from fellow relegation fighters Burnley, but Eddie Howe’s side are still looking to do January transfer business.Lingard is among those in Newcastle’s crosshairs, with the St James’ Park club making an approach about a loan deal for the England international.The 29-year-old enjoyed a successful...
PREMIER LEAGUE・2 DAYS AGO

Liverpool are through to the Carabao Cup final after beating Arsenal 2-0 on the night and on aggregate.They will face Chelsea at Wembley, after a dominant showing in the semi-final second leg which saw the Gunners end with 10 men after a late Thomas Partey red card.Diogo Jota raced infield to strike home the game’s first goal from the edge of the box midway through the first half, and the Portuguese forward was the star of the show, lobbing in a second to send the Reds clear.Partey had been on the pitch fewer than 20 minutes when he picked up...
PREMIER LEAGUE・20 HOURS AGO
San Diego Union-Tribune

Atlético out of Copa, Sevilla held in Spanish league race

Reigning champions Algeria were dumped out of the Africa Cup of Nations after an abject 3-1 defeat against the Ivory Coast as the group stage came to a conclusion on Thursday with Tunisia, Equatorial Guinea and tiny tournament debutants the Comoros all securing places in the last 16. Franck Kessie, Ibrahim Sangare and Arsenal's Nicolas Pepe all scored to put the Ivory Coast 3-0 up against Algeria in Cameroon's economic capital Douala, before Manchester City star Riyad Mahrez missed a penalty for the 2019 champions. Sofiane Bendebka eventually pulled one back with their first goal in over four hours of football at this year's tournament, but it was too little, too late for Djamel Belmadi's team. It is the fifth time in the last six Cups of Nations that the reigning champions have failed to make the AFCON knockout phase, but there has arguably never been a worse title defence.
SOCCER・17 HOURS AGO

Barcelona are making their move for Palmeiras superkid Endrick. Just 15 years of age, Enrick has every major club in Europe chasing his signature, including Manchester United and Liverpool. Brazilian media sources state Barca are also in contact and are eager to secure Endrick to a pre-contract. Barca hope to...
SOCCER・1 DAY AGO
World Soccer Talk

Madrid (AFP) – Barcelona were dumped out of the Copa del Rey on Thursday as Ferran Torres’ first goal for the club failed to prevent a dramatic 3-2 defeat after extra-time by Athletic Bilbao. Disappointment for Barca was compounded by the sight of a visibly upset Ansu Fati...
SOCCER・18 HOURS AGO
San Diego Union-Tribune

Iker Muniain scored twice - including an extra-time penalty winner - as Athletic Bilbao knocked Barcelona out of the Copa del Rey in the last 16. Muniain opened the scoring inside two minutes, before Ferran Torres scored his first Barcelona goal to level in the 20th minute. Inigo Martinez thought...
SOCCER・18 HOURS AGO
Tribal Football

Matt Turner's rapid rise could continue with a move to the Premier League.
PREMIER LEAGUE・23 HOURS AGO
San Diego Union-Tribune

Brentford vs Manchester United prediction: How will Premier League fixture play out?

Brentford and Manchester United meet for the first time in the Premier League in a rearranged clash at the Brentford Community Stadium.One of a number of fixtures to have been postponed in mid-December, Brentford host Ralf Rangnick’s side after a recent drop in form that has seen the London club slip to 14th in their debut Premier League campaign.FOLLOW LIVE: Team news and all the action as Brentford host Manchester UnitedThe visitors could be boosted by the return of a number of key players who missed their draw with Aston Villa, and know that an uptick in form is a...
PREMIER LEAGUE・1 DAY AGO
San Diego Union-Tribune

What the papers sayNewcastle have made a second loan offer for Manchester United’s Jesse Lingard after a first offer for the 29-year-old midfielder was reportedly knocked back on Wednesday, according to the Daily Mail. Lingard is said to prefer a loan to St James’ Park, but United are looking for a sale this month before his contract runs out in the summer.The same paper also reports the Magpies have made a £15.4million bid for 21-year-old Bayer Leverkusen and Netherlands left-back Mitchel Bakker.Fabio Cannavaro, former Italy defender and China coach, has been interviewed by Everton in their search for a new...
PREMIER LEAGUE・9 HOURS AGO
The Independent

Mikel Arteta hits back at Arsenal critics over Tottenham postponement

Mikel Arteta has defended Arsenal’s decision to successfully apply for Sunday’s Premier League match with Tottenham to be postponed and insisted they made the request for all the right reasons.The Spaniard revealed the Gunners still have “issues” but is hopeful they will be able to host Liverpool on Thursday in the Carabao Cup semi-final second leg at the Emirates.Arsenal’s decision to get the north London derby postponed was met with anger by rivals Tottenham, who expressed their surprise at the fixture being rearranged.Martin Odegaard was the only known Covid-19 case in the Gunners squad but they were without a plethora...
PREMIER LEAGUE・2 DAYS AGO