Stowaway hides in landing gear on flight from Guatemala to Miami, officials say 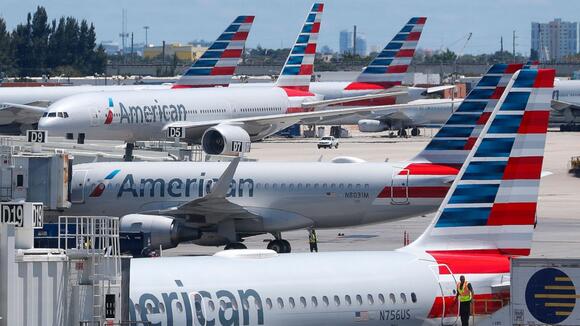 A man apparently stowed away in the landing gear compartment on a two-and-a-half-hour flight from Guatemala to Miami Saturday, officials said.

American Airlines flight 1181, which arrived at Miami International Airport shortly after 10 a.m., "was met by law enforcement due to a security issue," the airline said in a statement.

Officers with U.S. Customs and Border Protection apprehended the 26-year-old alleged stowaway, who "attempted to evade detection in the landing gear compartment," CBP said in a statement.

MORE: Alleged stowaway falls to his death from plane in London

The man, who was not identified, was evaluated by emergency medical services and taken to a local hospital for medical assessment, CBP said.

"Persons are taking extreme risks when they try to conceal themselves in confined spaces such as an aircraft," the agency said.

The Miami-Dade Police Department assisted with the incident and referred all questions to CBP, which is leading the investigation.

He will be given asylum, home, clothes, food, and benefits. He should be arrested and deported and in a data base saying he can’t return. Wait……,what was I thinking, back to Biden taking care of him for the rest of his life.

And 70 year olds are frisked and scanned while illegals jump on board for free. Don't you feel so much safer now?? they could have had a bomb.

Is Biden also going to give him $450,000 like the other illegals since he was was not seated in first class?

A Georgia prosecutor on Thursday requested a special grand jury to aid her investigation into possible 2020 election interference by former President Donald Trump and others. Fulton County District Attorney Fani Willis sent a letter, obtained by NBC News, to Fulton County Superior Court Chief Judge Christopher Brasher asking for a special grand jury to investigate any "coordinated attempts to unlawfully alter the outcome of the 2020 elections in this state."
GEORGIA STATE・16 HOURS AGO
Reuters

Top diplomats for U.S., Russia see no breakthrough at their Ukraine talks

GENEVA, Jan 21 (Reuters) - The top diplomats of Russia and the United States played down any prospect of quickly resolving their differences over Ukraine at talks they began in Switzerland on Friday, but the U.S. side still hoped the meeting could de-escalate soaring tensions. U.S. Secretary of State Antony...
U.S. POLITICS・9 MINUTES AGO
The Hill

It’s a tough time to be Chuck Schumer . Faced with the pressing need to deliver on President Biden ’s 2020 campaign pledge to protect voting rights after a brutal vote Wednesday evening that saw Democrats’ best hope for reform fail, the Senate majority leader is practically out of options.
PRESIDENTIAL ELECTION・17 HOURS AGO
The Associated Press

Meat Loaf, ‘Bat Out of Hell’ rock superstar, dies at 74

NEW YORK (AP) — Meat Loaf, the heavyweight rock superstar loved by millions for his “Bat Out of Hell” album and for such theatrical, dark-hearted anthems as “Paradise By the Dashboard Light,” “Two Out of Three Ain’t Bad,” and “I’d Do Anything for Love (But I Won’t Do That),” has died. He was 74.
MUSIC・1 HOUR AGO

A congressional panel investigating the January 6 attack on the U.S. Capitol has asked Ivanka Trump to testify about her conversations with then-President Trump that day. Meanwhile, a Georgia prosecutor investigating potential 2020 election interference by the former president has requested a grand jury. Scott MacFarlane has the latest.
GEORGIA STATE・11 HOURS AGO
ABC News

The Supreme Court has denied President Donald Trump's request for a stay of a lower court mandate.
CONGRESS & COURTS・1 DAY AGO
NBC News

New York State Attorney General Letitia James this week laid out what she described as "significant evidence" of fraudulent activity from a civil investigation into former President Donald Trump and his company - but a decision on whether to take legal action could be months away. In papers filed with...
POTUS・7 HOURS AGO