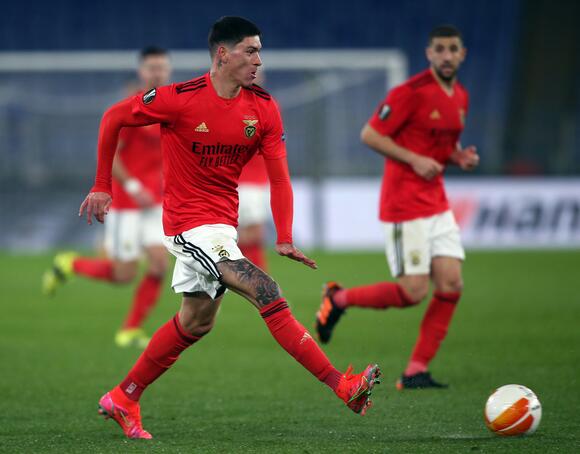 Benfica’s clash with Belenenses was abandoned amid extraordinary scenes after the Covid-hit Primeira Liga strugglers were forced to name a team of just nine players – including two goalkeepers.

The visitors cashed in to rack up seven goals by half-time, before Belenenses returned with just seven players.

The match was then called off a minute into the second half as goalkeeper Joao Monteiro dropped to the floor, forcing the referee to abandon the game due to the minimum number of players not being on the field.

Following a positive test in the squad earlier in the week, a total of 17 cases were reported to have been recorded among players and staff.

Despite the squad being decimated, the match went ahead with just nine players selected and goalkeeper Monteiro playing in midfield.

“Football only has heart when it is an example of public health. Today, football lost its heart.”

Manchester City and Portugal midfielder Bernardo Silva watched on and tweeted in disbelief: “What is this? Am I the only one who doesn’t understand why the game hasn’t been postponed?”

Darwin Nunez hit a hat-trick as Benfica put their depleted hosts to the sword, but the headlines were made by Belenenses, who eventually managed to force the spectacle to be abandoned.

As one of the best soccer players in the world, it only makes sense that Neymar’s net worth reflects his status in the game. Today, the professional footballer’s salary puts him among the highest-paid athletes around the globe—but how much is Neymar worth, exactly? Neymar, whose full name is Neymar da Silva Santos Junior, was born on February 5, 1992, in Mogi das Cruzes, Brazil. His father, Neymar Santos Sr., is a former footballer himself who quickly became his son’s mentor after witnessing his budding potential for the sport. From a young age, Neymar Jr. was coached in soccer. At the...
FIFA・1 DAY AGO
The Independent

At least eight fans were killed and 38 people injured at the Yaounde Olembe Stadium in Cameroon on Monday before the host nation's round of 16 match in the Africa Cup of Nations, the government said in a statement.Images shared on social media, showed screaming fans being crushed at an entrance gate before the game against Comoros. According to eyewitness reports, people were “trampled” upon as fans forced their way into the stadium. Children are also believed to be among those involved in the tragedy with others adding that the struggle began when stewards closed the gates and stopped allowing...
UEFA・2 DAYS AGO
The Independent

Paul Collingwood fears for the long-term mental health of England cricketers following two years of Covid-enforced bubbles and believes a disrupted preparation meant they were “sitting ducks” at the Ashes.The onset of the pandemic has left England regularly contending with restrictive conditions, initially at home and then on tour which Collingwood suspects has inhibited performance levels.But of greater worry to the England assistant, taking charge for the Twenty20 series against the West Indies in Barbados in the absence of head coach Chris Silverwood is the impact of lengthy stints in these environments.While Collingwood accepted global circumstances have meant compromises...
PUBLIC HEALTH・1 DAY AGO
San Diego Union-Tribune

Jesse Lingard's proposed loan move to Newcastle United is on the verge of collapsing following an impasse in negotiations with Manchester United.The two clubs are understood to have failed to reach an agreement over a loan fee for Lingard, who is eager to secure a move away from Old Trafford this month.The 29-year-old's United contract is set to expire at the end of the season and he has seen his first-team opportunities limited under interim manager Ralf Rangnick.Relegation-threatened Newcastle saw an initial bid for Lingard rejected last week and, despite talks continuing, have failed to settle on a fee with...
PREMIER LEAGUE・1 DAY AGO
The Independent

Christian Eriksen has further stepped up his recovery from his cardiac arrest by training with former club Ajax.Eriksen, who has been linked with a return to the Premier League with Brentford revealed earlier this month that he “died for five minutes” when he collapsed during the Euro 2020 group match against Finland in June.The 29-year-old received life-saving treatment on the pitch before being taken to hospital and was fitted with an implantable cardioverter defibrillator (ICD) device.He left Inter Milan by mutual consent before Christmas after rules in Italy prevented him from playing with an ICD and has been training with...
PREMIER LEAGUE・2 DAYS AGO
The Independent

Anthony Martial’s departure from Manchester United, on loan to Sevilla, has not come as a surprise to many - and certainly not to Rio Ferdinand.The former Monaco forward has been a bit-part player for the Premier League team for some time, featuring just eight times in the Premier League this season and scoring only once in all competitions for the Red Devils.He arrived with a big reputation and price tag and initially excited supporters, but inconsistent showings and being overshadowed by the likes of Marcus Rashford have left him on the fringes of the club, managing fewer than 400 minutes...
PREMIER LEAGUE・1 DAY AGO
The Independent

Brentford have upped their offer for Nottingham Forest's Brennan Johnson, amid an expected move from Newcastle United.The 20-year-old attacking midfielder has become one of the most pursued young players in the Championship, and sparkled in Forest's push for promotion. Johnson has six goals in 28 league games, and the feeling is naturally that he is more than ready for the Premier League, and can prove a difference in a relegation battle.The situation is complicated since any sale this January would disrupt Forest's promotion ambitions, but the fact his contract runs out in 2023 means the Championship club would likely have...
PREMIER LEAGUE・2 DAYS AGO

What the papers sayTottenham’s Dele Alli is being watched closely by a number of Premier League teams, according to the Daily Mail. Brighton are reportedly joining Newcastle Burnley and Everton in the chase to sign the 25-year-old midfielder. And the Daily Echo adds that Southampton have expressed an interest too.The Mail also reports Newcastle have made an offer of roughly £30million for Lyon midfielder Bruno Guimaraes. The 24-year-old has been targeted by Arsenal and Juventus, but is yet to see offers from those clubs. The Magpies’ offer would make him their second-most expensive signing if successful.Tottenham have had a...
PREMIER LEAGUE・1 DAY AGO
The Independent

Newcastle’s hunt for further January recruits is destined to go down to the wire as selling clubs dig in for a fight.The Magpies, in their first transfer window under Amanda Staveley’s largely Saudi-backed consortium, have spent the last two weeks striving to add to their earlier signings of Kieran Trippier and Chris Wood.However, they have been met with stern resistance by clubs either determined not to sell their best players this month, or intent on not doing so until they have squeezed every last penny they can out of the Premier League’s newest financial power.Newcastle’s search has sparked daily speculation...
PREMIER LEAGUE・1 DAY AGO
The Independent

Newcastle United Supporters Trust says it is “imperative that lessons are learned” after raising significant safety concerns following Saturday’s Premier League match at Leeds Visiting fans were left tightly packed together outside Elland Road when some of the stadium’s electronic turnstiles stopped working.Supporters were eventually let in when a gate was opened but many missed kick-off and could not find their allocated seats due to congestion.Leeds plan to review safety measures at their home ground in conjunction with West Yorkshire Police.A spokesman for the Newcastle United Supporters Trust said: “The Trust has raised significant concerns to Leeds United in relation...
PREMIER LEAGUE・2 DAYS AGO

Is Ivory Coast vs Egypt on TV? Time, channel and how to watch all today’s Africa Cup of Nations fixtures

One of the biggest match-ups at the 2021 Africa Cup of Nations so far takes place on Wednesday, with one of the pre-tournament favourites set for a relatively early exit.Ivory Coast cruised through their group stage, finishing top and unbeaten in Group E, with only hosts Cameroon scoring more than the six goals The Elephants managed.The goals have been spread around so far, with Arsenal’s Nicolas Pepe the only player in the squad to notch twice at the tournament - which is the same tally as last-16 opponents Egypt have managed in total.Mohamed Salah managed one goal as his team...
PREMIER LEAGUE・1 DAY AGO
The Independent

By the time Liverpool play their next match, Curtis Jones will have turned 21 years old. A coming-of-age marker doesn’t really seem to exist in English football anymore; gone are U21 leagues, several top-flight players have needed to wait until 22 or 23 for their chance, more coaches subscribe to the “good enough, old enough” mantra. But still, no longer being a literal under-21 effectively marks the transition from youngster to senior player, be it as a superstar-in-waiting or squad-filler option.For a player who recently had his manager claim to be his “biggest fan”, it’s perhaps an even bigger milestone...
PREMIER LEAGUE・2 DAYS AGO
The Independent

Tottenham Hotspur are still to finalise a deal for Adama Traore but are confident of signing the Wolves winger before the January transfer window shuts.Spurs want to bring the 26-year-old Spain international to north London and remain in talks with their Premier League counterparts over a switch as they try to finally land a player they also tried to sign in the summer.It is understood they are expected to make a bid in the coming days with Wolves holding out for around £20million.Traore, who is out of contract next summer and will not be renewing at Molineux, is one...
PREMIER LEAGUE・2 DAYS AGO
The Independent

England’s build-up to the Guinness Six Nations has been disrupted by their first outbreak of Covid after Joe Marler tested positive for the second time in three months.Marler’s case was confirmed by lateral flow and PCR tests on Tuesday morning and the Harlequins prop has withdrawn from Eddie Jones’ 36-man squad that is training in Brighton this week.He was forced to miss the autumn victory over Australia for the same reason, but subsequently returned as a replacement against South Africa a week later.Covid can eat shit…… 😤 but it does mean I can go back to my diet of chillis...
WORLD・2 DAYS AGO
The Independent

Liverpool have rejected initial approaches from Monaco and Leeds for forward Takumi MinaminoThe Japan international has made 18 appearances this season but only six of those have been starts and four of those came in the Carabao Cup.However, in spite of the expression of interest from the Ligue 1 club and fellow Premier League side the PA news agency understands Liverpool have turned down both.While Minamino is well behind Mohamed Salah, Sadio Mane, Roberto Firmino and Diogo Jota in the pecking order Jurgen Klopp’s side are still in four competitions – they have a League Cup final against Chelsea in...
PREMIER LEAGUE・1 HOUR AGO
The Independent

Watford have announced the appointment of Roy Hodgson as their new manager.The former England boss will be joined at Vicarage Road by assistant Ray Lewington, who managed the Hornets from 2002 until 2005.We are delighted to confirm the appointment of Roy Hodgson as the club's manager.Welcome to Watford, Roy!— Watford Football Club (@WatfordFC) January 25, 2022Watford, who sit in the Premier League relegation zone, sacked Claudio Ranieri on Monday after only 16 weeks in charge following a nine-game run without a win.
PREMIER LEAGUE・2 DAYS AGO
The Independent