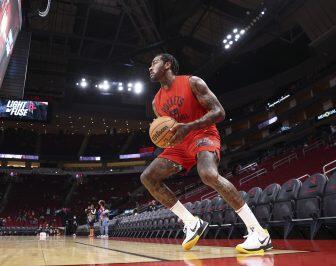 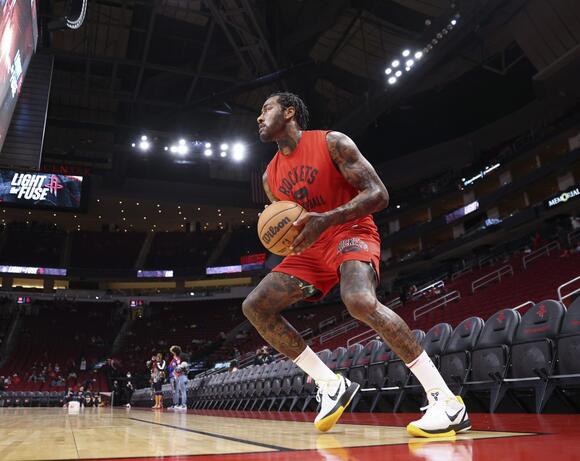 Before the 2021-22 NBA season could get underway, John Wall and the Houston Rockets verbally agreed to allow the star point guard to sit out until a trade could be found. Wall wanted a trade away from the Rockets so he could play for a more immediate contender. Now, Wall has waited long enough and wants to get back on the court.

Adrian Wojnarowski reports Wall recently spoke to Rockets’ general manager Rafael Stone about resuming play with the team. Woj’s report goes on to state the two plan to speak again on Sunday. This meeting could simply kickstart Wall’s return to the court, once he’s in game shape again, which shouldn’t take long for the five-time NBA All-Star.

Wall, who played 40 games with the Rockets last season, has yet to play at all this year for the 2-16 Rockets.

Of course, two weeks ago rumors circulated about the Miami Heat having an interest in signing Wall , only if a buyout could be reached with his current team. 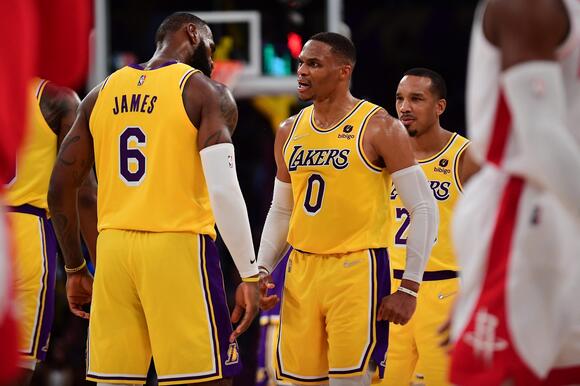 Wall wanting to play for the Rockets now could simply be him posturing for such a negotiation. It’s much tougher for any prospective team to have an interest in trading for Wall without seeing him play.

No matter what, for Wall to get to another organization this season, he’ll have to either agree to a buyout of his current contract, or a team will have to trade for his $44 million base salary. Which again, will not happen if he’s sitting on the bench all season.

Playing, even if it’s for a bad Rockets team, gives Wall the best chance of getting back onto a playoff contender. After all, the Washington Wizards are finally flourishing just one season after Wall was traded from the organization that once selected him No. 1 overall.

The 2021-’22 NBA season is proving to be a massive disappointment for the Los Angeles Lakers. Between the Anthony Davis
NBA・15 HOURS AGO
fadeawayworld.net

Russell Westbrook has been underwhelming since he joined the Los Angeles Lakers before the start of this season. The former MVP has received a lot of the blame for the Lakers underperforming, with fans and analysts naming his inefficient play and careless turnovers for the Lakers' struggles. Considering all of that, there have been rumors that the Lakers are already willing to trade Westbrook.
NBA・1 DAY AGO
Sportsnaut

With the 2021-22 NBA season in full swing, basketball fans are putting on their jerseys and filling up arenas around
NBA・2 DAYS AGO
Sportsnaut

The Boston Celtics have made the playoffs each of the last seven NBA seasons and they have made the Eaastern Conference Finals three different times in this span, but their playoff streak may be in doubt this season. Currently 24-24, the Celtics have been a very shaky team during the...
NBA・1 DAY AGO
USA TODAY Sports Media Group

Only realistic Russell Westbrook trade is to Rockets for John Wall?

Marc Spears: “I was told that they have a couple on the table, several on the table, but the only one that’s really has some, you know, realistic potential to it is with the Lakers for Russ. They actually make, I don’t know if it’s nearly to the same dollar, but a similar salary, so you can trade them one-for-one without including anybody else. That 2027 Laker pick that you mentioned before, that first-round pick, seems to be pretty coveted, and I would expect it to be included in such a deal. But John’s in Miami. He’s been working out. He actually asked the Rockets for permission to be in Miami so he could be near his kids and focus on working out.”
NBA・7 HOURS AGO
Sportsnaut

At first thought, it makes sense for a 14-33 team that’s in last place in its respective conference to trade
NBA・1 DAY AGO
Sportsnaut

NBA trade rumors: Which top targets could push contenders over the top to a championship?

With NBA championship race wide open, the right trade could be a big factor in pushing one of the contenders to a title.
NBA・11 HOURS AGO
USA TODAY Sports Media Group

If the Los Angeles Lakers decide to pull the plug on the Russell Westbrook experiment, the only team that can reportedly help them is the Houston Rockets. Longtime NBA insider Marc Stein reported the news last week in his NBA newsletter, saying the Rockets would be interested in swapping John Wall to L.A. for Westbrook since both players are making similar money.
NBA・1 DAY AGO
fadeawayworld.net

Steph Curry has been struggling of late after starting the season in undisputed MVP form. Recent games have seen Curry shoot poorly and struggle often as his Warriors team has relinquished their No. 1 seed to the surging Phoenix Suns. It seems like Curry may just have snapped his poor run though, making the game-winning shot against the Houston Rockets on Friday night at the buzzer.
NBA・2 DAYS AGO
Sportsnaut

Dejounte Murray recorded a double-double, Jakob Poeltl finished a rebound shy of his fifth double-double in six games and Keldon
NBA・1 HOUR AGO

Rockets nursing top pick along ahead of Spurs matchup

No matter how big or small of a step the Houston Rockets take collectively during this rebuilding season, almost every
NBA・1 DAY AGO
Sportsnaut

LeBron James totaled 33 points, seven rebounds and six assists as the Los Angeles Lakers led most of the way
NBA・1 HOUR AGO
Pounding The Rock

San Antonio at Houston Rockets: Spurs blow out the Rockets, 134-104

The San Antonio Spurs are back on the road for the first time in eight games and got revenge for the opening loss of the previous seven-game homestand by blowing out the Houston Rockets in their house, 134-104. After a relatively slow start for both teams, the Spurs used a 14-0 run to close the first quarter up by double-digits and just kept building it from there. After outscoring the Rockets 39-23 in the third quarter, it was a complete fourth quarter of garbage time, allowing the Spurs to rest up their starters on the first night of a back-to-back.
NBA・1 HOUR AGO
USA TODAY Sports Media Group

John Wall working out in Miami

In that same Hoop Collective podcast, ESPN’s Marc J. Spears said that John Wall is working out in Miami, away from the Rockets, as the team continues to survey his trade market. Although Houston has had some conversations about Wall, most of those scenarios are viewed as “pie in the sky,” according to Spears, who adds that the club views a swap involving Russell Westbrook as the most realistic option for Wall at this point. During his conversation with Spears, Windhorst stated that the Rockets guard isn’t interested in losing any money in a buyout agreement.
NBA・11 HOURS AGO
NBA Analysis Network

3 Trade Targets For Houston Rockets To Keep Tabs On

As we enter the new year, it is no surprise to see the Houston Rockets at the bottom of the Western Conference. This was the position that was expected as the team continues to go through a transition period. Houston sent away their big names last season but could also have some more moves in mind as we approach the NBA trade deadline.
NBA・2 DAYS AGO
Sportsnaut

The numbers favor the Miami Heat. Miami, which plays host to the New York Knicks on Wednesday night, has the
NBA・6 HOURS AGO
USA TODAY Sports Media Group