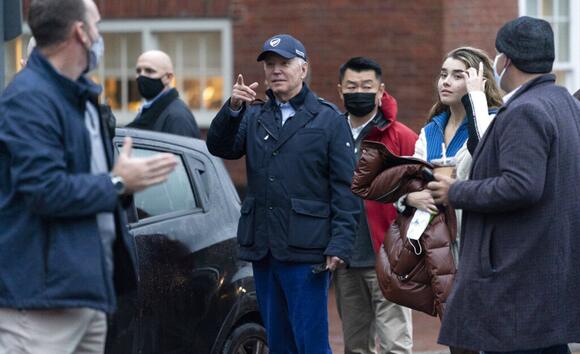 His week was typical. A few high points muffled by problems and bad polls. For the high, jobless claims have scaled back dramatically. For the lows, a new COVID strain is scaring the world and tanked the stock market, especially after Biden stopped flights from countries in Africa where it is spreading. And Democrats are starting to run for the hills, concerned about a 2022 blowout.

Conservative grader Jed Babbin gave a “D,” but credited the president for visiting with troops in a standard Thanksgiving tradition.

President Joe Biden had a quiet week, with jobless claims the lowest since 1969. That was the good news in an otherwise depressing week.

Biden said he’s running again in 2024 to fend off a primary race but his mental acuity is in constant doubt. This week, for example, he read from a teleprompter and didn’t stop until after he’d said, “end of quote.” Meanwhile the Department of Commerce’s measure of inflation -- the “core personal expenditure index” -- is the worst it’s been since the 1990s.

Seventy-seven percent of Americans now reportedly feel the personal impact from the #Bidenflation he’s imposed on us with a wild spending spree that he wants to increase. Biden released 50 million barrels of oil from our Strategic Petroleum Reserve to try to lower the price of gasoline, but the prices at the pump are still rising. Biden blames the rising price on oil company gouging, but the facts don’t support his assertion. The ratios between wholesale and retail gasoline are steady.

Biden and his wife did visit troops at Fort Bragg early in the week and a few of the Coasties at Nantucket Island on Thanksgiving. It was the least they could do for our troops, so they did it.

Jed Babbin is a Washington Examiner contributor and former deputy undersecretary of defense in the administration of former President George H.W. Bush. Follow him on Twitter @jedbabbin

to little way to late ,the red tsunami is coming ,and there is nothing that can be done to stop it

We knew this was coming. He’s running out of excuses, it would seem eventually he’d tell us the truth! Oh that’s right, Biden mouth burns when he tells the truth. Lying is so much easier! No more canker sores for him!

stop voting for Democrats because this is what you get. mandates, open borders, lawlessness, tax and spend, corruption just to name a few.

Top House Democrat: ‘We’ll hold the majority in the fall’

Defying polls and the predictions of many political analysts, Majority Leader Steny Hoyer made a forecast that House Democrats would hold on to enough seats to stay in power after the midterm elections in November.
CONGRESS & COURTS・6 HOURS AGO
WashingtonExaminer

President Joe Biden acknowledged Wednesday that the pandemic has left Americans exhausted and demoralized but insisted at a news conference marking his first year in office that he has “outperformed” expectations.
PUBLIC HEALTH・40 MINUTES AGO
WashingtonExaminer

This week’s White House Report Card finds President Joe Biden and his agenda stalled out, leaving him little to brag about on his one-year anniversary Thursday.
PRESIDENTIAL ELECTION・4 DAYS AGO
Reuters

WASHINGTON — President Joe Biden is urging schools to stay open, but there’s a widespread Covid testing shortage. He calls it the “pandemic of the unvaccinated,” but that has only confused boosted Americans home sick with the omicron variant. And the administration hasn’t changed its guidance...
POTUS・8 DAYS AGO

Are pushing their party's president for more Covid testing resources. Immediately. They want testing capacity so everyone can take "at least one rapid test per week." What happened: As the nation teems with millions of new Covid infections thanks to the Omicron variant, 51 congressional Democrats are asking President Joe Biden to take a number of steps to increase rapid testing around the country.
CONGRESS & COURTS・9 DAYS AGO
Axios

House Democrats on Tuesday postponed their annual retreat scheduled for Feb. 9 to 11 due to the ongoing surge in COVID-19 cases, Axios has confirmed. Driving the news: The decision is based on "guidance from the Office of Attending Physician," Democratic Conference Chair Hakeem Jeffries (D-N.Y.) wrote in a letter to lawmakers, Punchbowl News' Jake Sherman reports. Jeffries added that "the health and safety of the Members, their families and staff is our top priority."
CONGRESS & COURTS・8 DAYS AGO
WashingtonExaminer

The White House was pressed on Monday about whether President Joe Biden has a plan to address liberal activists' concerns about voting access beyond giving speeches ahead of a major address.
PRESIDENTIAL ELECTION・9 DAYS AGO

WASHINGTON, Jan 5 (Reuters) - The White House is in constant ongoing dialogue with U.S. lawmakers and others on COVID-19 stimulus funding but the current economy appears strong, the White House spokeswoman said on Wednesday. "We are in a very different place than we were a year ago or six...
POTUS・14 DAYS AGO
WashingtonExaminer

Biden says no 'cause for panic' over omicron, calling it 'the new enemy'

The White House is bracing for another bad report Wednesday on inflation — but now expects it to slow down by the end of the year, administration officials tell Axios. Why it matters: The Biden administration had been labeling price hikes as "transitory." By publicly warning the Consumer Price Index December reading shows inflation will linger through 2022, officials are trying to temper public expectations and minimize the bad-news blow.
POTUS・7 DAYS AGO
WashingtonExaminer

The White House defended the Biden administration’s response to a nationwide shortage of coronavirus tests, blaming it on “unprecedented demand” as the omicron variant spread over the holidays and into the New Year.
POTUS・9 DAYS AGO
Newsweek

One QAnon follower said: "When he came out…I instantly felt it was not him. I kept trying to convince myself that it was."
ARIZONA STATE・2 DAYS AGO
WashingtonExaminer

The White House could wade into the latest school mask mandate battle, which is now being waged just across the Potomac River from the nation's capital.
POTUS・12 HOURS AGO