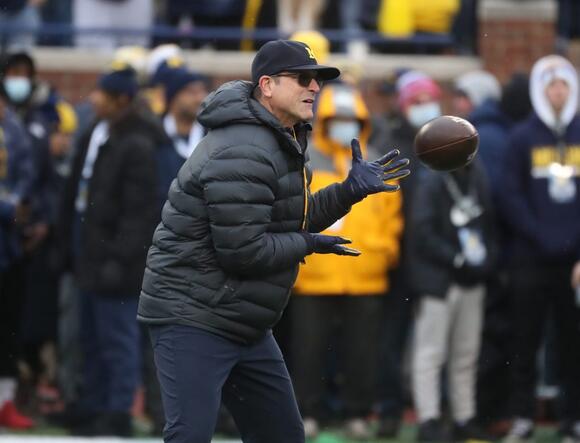 The Michigan Wolverines hired Jim Harbaugh to win “The Game”, delivering this program the victory over the Ohio State Buckeyes that it desperately sought. On Saturday, the best rivalry in college football delivered a finish for the ages.

Taking the field at Michigan Stadium as the underdogs, many expected Harbaugh to lose the coaching battle against Ryan Day. Considering the Wolverines cost themselves against in-state rival Michigan State, beating one of the hottest teams in college football seemed unlikely.

With the snow falling down and one of the best stadiums in football , Michigan came out firing. A 10-play, 75-yard drive was capped off with a 14-yard score by A.J. Henning. Ohio State came roaring back, leading 10-7 late in the second quarter.

Everything changed in the second half. The Wolverines returned to pummeling Ohio State with the rushing attack, leading to consecutive touchdowns by Hassan Haskins. On the other side, Aidan Hutchinson stole the show with a performance for the ages and a Michigan record for sacks.

Ohio State answered, making it a one-score game with under five minutes to play. But the Wolverines turned to Haskins one last time and Michigan Stadium erupted as his fifth touchdown sealed the 42-27 victory.

The Wolverines are celebrating and Harbaugh can finally get the proverbial monkey off his back. After five consecutive losses to the Buckeyes in the Harbaugh era, Michigan is victorious over Ohio State for the first time in 3,563 days and likely just earned a spot in the College Football Playoffs.

As the final seconds ticked away, the college football world reacted to the monumental game.

Ohio State has had some incredible coaches of their football program, and Jim Tressel is right up there with the best of them. The Sweater Vest is third in Ohio State history in wins behind Woody Hayes and John Cooper. He’s behind only Urban Meyer, Ryan Day and Carroll Widdoes in winning percentage .828.
COLLEGE SPORTS・1 DAY AGO
Eleven Warriors

Just a friendly reminder that Mike Weber might be a proper seer. Word of the Day: Ululate. 1-STAR REVIEW. Jim Tressel hasn't coached at Ohio State for over a decade, but that didn't stop him from coming at Michigan off the top rope during an episode of the 1 Star Recruits podcast last week.
NFL・2 DAYS AGO
247Sports

Michigan quarterback J.J. McCarthy wants everyone to know how much he appreciates Jim Harbaugh, the Big Ten's reigning coach of the year after leading the Wolverines to their first outright conference title since 2003. McCarthy used his personal Twitter account recently to express admiration for Harbaugh. "That's my head coach,"...
MICHIGAN STATE・1 DAY AGO
FanSided

With rumors continuing to spread regarding whether or not Jim Harbaugh is going to stay put as Michigan‘s head coach or leave for a head coaching position in the NFL, no one is really sure what the veteran football coach is going to do. While there has yet to...
NFL・1 DAY AGO
Bring Me The News

Michigan writer: 'Don't count out the Vikings' on Jim Harbaugh

The Minnesota Vikings are still searching for their next head coach. At this point, the Vikings have confirmed interviews with eight candidates, and none of them are named Jim Harbaugh. But is it just a matter of time before Harbaugh interviews for the job? Harbaugh was thrown onto the list...
NFL・1 DAY AGO
Yardbarker

Rumors are raging that Denver Broncos GM George Paton has narrowed down his head-coaching search to three finalists. As the Green Bay Packers exited the postseason party over the weekend, Paton was afforded the luxury of hastily organizing a visit with offensive coordinator Nathaniel Hackett, who arrived in Denver for a second interview on Monday.
NFL・1 DAY AGO
Sportsnaut

Super Bowl 2022: The Tampa Bay Buccaneers are the reigning NFL champions, but who'll make the playoffs — and lift the Lombardi Trophy at the end of this season?
NFL・51 MINUTES AGO

Just days after the end of the Green Bay Packers’ season, the team has added a quarterback to their QB room. According to NFL reporter Dov Kleiman, the Packers have signed former LSU product Danny Etling. “Packers signed a new QB,” Kleiman tweeted. “Former Patriots Danny Etling, per his...
NFL・1 DAY AGO
On3.com

Just two days before competing in an NFL divisional round playoff game, Leonard Fournette learned his cousin had died. As tough as it was to swallow, the Tampa Bay running back knew he still wanted to play. He suited up and delivered an impressive two-touchdown performance in spite of his...
NFL・2 DAYS AGO
The Spun

Tyreek Hill made big play after big play for the Chiefs in the divisional round. And when Kansas City needed their Cheetah most, with a minute to go in the fourth, Patrick Mahomes connected with Hill on a 64-yard strike to take a (short-lived) 33-29 lead. After the game, the...
NFL・2 DAYS AGO

Tennessee legend Peyton Manning was a ballyhooed recruit in 1993. On one Sunday, he fielded 23 calls from coaches. Now, nephew Arch has the spotlight.
NFL・1 DAY AGO
AllBruins

The Bruins will be facing their highest-ranked opponent in over two months when the Wildcats come to Pauley Pavilion.
LOS ANGELES, CA・2 DAYS AGO
The Spun

The Las Vegas Raiders are one of nine franchises still looking for a new head coach, and they apparently are interested in Todd Bowles. Bowles has spent the last three seasons as the defensive coordinator with the Tampa Bay Buccaneers. He also held that role with the Arizona Cardinals in 2013-14.
NFL・1 DAY AGO
The Spun

The Denver Broncos are reportedly narrowing their head coaching candidates list and Dallas Cowboys defensive coordinator Dan Quinn might be emerging as the frontrunner. Quinn, who previously coached the Atlanta Falcons, making a Super Bowl, helped turn around the Cowboys defense in 2021. The Cowboys had multiple defensive stars in...
NFL・2 DAYS AGO

Buccaneers head coach Bruce Arians doesn’t want quarterback Tom Brady to feel rushed in making a decision for next season. There have been numerous rumors the last few days on how Brady may call it a career after this season, but there’s been no formal announcement. Arians confirmed...
NFL・2 DAYS AGO
Sportsnaut

Kansas City Chiefs wide receiver Mecole Hardman can be absolutely electric with the football. He’s also been known to make
NFL・2 DAYS AGO
The Spun

A stunning development has entered the mix in the Caleb Williams sweepstakes, according to a new report. It was previously believed USC was far and away the favorite to land the former Oklahoma quarterback. Then LSU reportedly entered the fray. Now, it’s a Big Ten team’s turn to try and land the five-star transfer.
COLLEGE SPORTS・23 HOURS AGO
USA TODAY