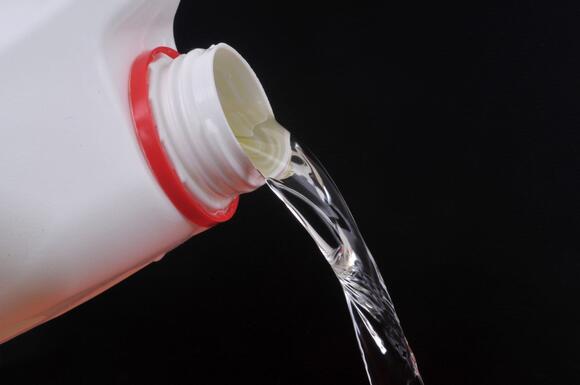 Even though it is impossible to remove COVID-19 vaccines from someone’s body, anti-vaccine groups online have started circulating rumors that they can be extracted with bleach, magnets and more.

According to Business Insider , people are promoting toxic chlorine dioxide bleach – a chemical used to disinfect drinking water – both as a part of a “de-vaccination treatment” and as a potential cure for COVID-19. It is neither, said the outlet.

In August, the U.S. Food and Drug Administration issued a warning about chlorine dioxide that said ingesting the chemical could have life-threatening, adverse effects such as: respiratory failure, electrical changes in the heart, low blood pressure, acute liver failure, low blood cell counts, severe vomiting and severe diarrhea. Additionally, the FDA sent a warning letter to Genesis 2 Church for manufacturing a product called “Miracle Mineral Solution” that contained the chemical.

Miracle Mineral Solution has been linked to seven deaths .

Andreas Kalcker is one of the people promoting use of chlorine dioxide bleach to “de-vaccinate” on the BitChute video hosting service, said Business Insider. He claims that COVID-19 vaccines contain graphene oxide, a chemical used in high-tech manufacturing, and that chlorine dioxide can rid the body of it.

A fact check report by Reuters found that COVID-19 vaccines do not contain graphene oxide.

Even so, conspiracy theories such as Kalcker’s are spreading on far-right and extremist platforms such as BitChute and the social media app Telegram. Business Insider said they are even popping up on mainstream platforms such as Facebook and TikTok.

Joe Ondrak, a disinformation expert and the lead researcher at Logically AI, said that it is hard to tell how far the theories are spreading in Facebook and Telegram, because online communities on those apps are often private. However, he said it is unlikely that the movement will grow much more.

Meta, Facebook's parent company, told Business Insider that its goal was to promote accurate information about COVID and vaccines and that it would remove groups spreading misinformation.

Bleach is not the only method of “de-vaccination” being promoted online.

According to Business Insider, BitChute also has a video of a man attempting to use electrodes, a strong magnet and “55 percent Montana whiskey” to remove a COVID-19 vaccine from a military veteran. Another shows a man making incisions with a razor.

Previously, online groups made headlines for promoting Ivermectin, a anti-parasite drug typically used to treat livestock animals such as horses, as a COVID-19 cure.

Vaccines approved in the U.S. are safe and effective at treating most COVID-19 infections, according to the Centers for Disease Control and Prevention . Around 30 percent of the U.S. population was unvaccinated as of Nov. 24.

why do anti-vaccination people insist on trying to poison themselves with everything but the one thing that is actually made to help them ?

Let the covidiots do whatever they want to themselves & their families, let them use bleach & borax externally better yet internally, with a fentanyl chaser.

The militant anti-vaxxers who stormed the pharmacy said they had come to stop any COVID vaccines being administered, and were prepared to use force if necessary. They had the weight of the law behind them, they wrongly believed. “There’s going to be no vaccinations taking place today while [the government...
PHARMACEUTICALS・3 DAYS AGO
Chattanooga Daily News

The 52-year-old former anti-vaxxer who reportedly bragged he was a hero for refusing to get vaccinated is now urging people and other vaccine skeptics not to follow his lead after the killer virus left him fighting for life in hospital. He reportedly turned his back on getting a life-saving injection, but after contracting Coronavirus just before Christmas now says he wishes he’d had the COVID-19 vaccine.
PHARMACEUTICALS・14 DAYS AGO
Lawrence Post

“He was afraid that he would get some kind of health complication from the vaccine”, Anti-vaxxer who ignored his wife’s requests to get the COVID-19 vaccine has died of the disease

Unfortunately, the Covid pandemic is still having a catastrophic impact on our everyday health and our loved ones. Sadly, the coronavirus was detrimental to the 45-year-old man who reportedly ignored his wife’s pleas to get the Coronavirus vaccine. After a few weeks in hospital, he lost his final battle against the killer virus. The man reportedly died of COVID-19 on January 2 after being admitted to hospital in December and placed in an induced coma. His family still doesn’t know how he contracted the virus, but says he had not been vaccinated, despite his wife’s attempts to persuade him.
PUBLIC HEALTH・10 DAYS AGO
KCBS News Radio

A mandatory vaccine policy set to go into effect this week has been stayed in the Piedmont Unified School District for children as young as five as a result of a recent lawsuit.
PIEDMONT, CA・4 DAYS AGO

A combination of vaccination and natural infection seems to offer enhanced immunity across variants.
SCIENCE・2 DAYS AGO
Daily Mail

An Indian farmer was left astonished yesterday after one of his goats gave birth to a kid with the 'face of a human' which neighbours described as a 'warning from God'. The goat belonging to farmer Shakar Das, 46, gave birth to several offspring in Gangapur village in the northeastern Indian state of Assam.
INDIA・27 DAYS AGO
BGR.com

Don't Miss: 10 Amazon deals you need to see on Sunday: Quest protein bars, COVID tests, $189 AirPods Pro We recently warned you about a Target mailbox recall that was issued due to laceration hazards. But that’s not the only product that can malfunction and lead to injuries that might require medical attention. Scott Fetzer Consumer Brands issued an electric knife recall for fillet knives sold at Walmart and Amazon. The knives are very dangerous because they can malfunction and pose a serious laceration risk. If you bought any of the knife models in the recall, you should stop using them right...
RETAIL・16 DAYS AGO
Indy100

Belly buttons - we all have them - whether you have an innie or an outie but as a smaller part of our body, some may overlook the personal hygiene routine of regular washing that is needed to take care of the area. (If you have omphalophobia - a fear...
CELEBRITIES・3 DAYS AGO

How to Get Free N95 Masks From the Federal Government

The White House says 400 million face coverings will be available under a scheme that begins this week and will be fully operational by February.
U.S. POLITICS・5 DAYS AGO
BGR.com

Here’s one of the unfortunate realities that goes hand-in-hand with buying a regular staple of goods from your local grocery store. It’s the fact that safety concerns sometimes result in product recalls to be aware of. A mishap in a manufacturing facility. Packages not correctly labeling all ingredients — all kinds of problems can result in such a recall. In fact, those of you who’ve recently bought spinach from a Lidl store? You’ll for sure want to be aware of this first recall and its details.
FOOD SAFETY・3 DAYS AGO
The US Sun

MILLIONS of cash-strapped parents with kids can automatically get monthly Supplemental Security Income payments worth $687 on average. Around five million people received SSI checks last month and the scheme is designed to help seniors as well as disabled adults and children. Checks are usually sent out on the first...
PERSONAL FINANCE・23 HOURS AGO
The US Sun

THE Supplemental Nutrition Assistance Program (SNAP), otherwise known as Food Stamps, is currently helping more than 41.5million Americans put food on the table for their families. SNAP is the largest federal nutrition assistance program of its kind and now it's allowing some recipients to use their SNAP money at select...
AGRICULTURE・2 DAYS AGO

THE bulked-up dog believed to be the world's "strongest" pup was born with a genetic mutation that gave her a bulging 24-pack and muscles like Arnold Schwarzenegger. But just like The Terminator star, Wendy the whippet was a gentle giant. Born with a rare genetic mutation, Wendy was twice as...
PETS・6 DAYS AGO
Interesting Engineering

Bill Gates, the visionary who warned us about a pandemic five years before it actually happened, has said that future pandemics could turn out far worse than COVID-19, The Independent reported. Gates reportedly said this as his charitable foundation donated $150 million to the Coalition for Epidemic Preparedness Innovation (CEPI) to fight the COVID-19 vaccine and prevent future pandemics.
PUBLIC HEALTH・1 DAY AGO
Lawrence Post

The 27-year-old mom of six reportedly died after battling COVID-19 and pneumonia related to the virus. Her husband said that he and his wife were not vaccinated due to their beliefs. The mother was pregnant with their sixth child when the couple caught COVID-19. The woman from Texas, Crystal Hernandez,...
WOMEN'S HEALTH・2 DAYS AGO
The US Sun

A RARELY known food stamp hack can help recipients turn $1 in funds into $25 worth of goods. Around 42million Americans across the country receive SNAP (Supplemental Nutrition Assistance Program) benefits that help them to buy groceries. The money is provided through an electronic benefits transfer (EBT) card, used as...
HEALTH・4 DAYS AGO
Newsday

Among all the ways that COVID-19 affects our lives, the pandemic confronts us with a profound moral dilemma:. How should we react to the deaths of the unvaccinated?. On the one hand, a hallmark of civilized thought is the sense that every life is precious. On the other, those who...
PUBLIC HEALTH・13 DAYS AGO
IFLScience

Sigh. In anti-vaxxers' unending campaign of consuming literally anything other than scientifically proven drugs to protect themselves from COVID-19, it appears we have entered the endgame. We’ve weathered the hydroxychloroquine phase, endured Ivermectin endorsements, and even survived the suggestion we should all just drink bleach. Now though, comes the...
PUBLIC HEALTH・13 DAYS AGO
Newsweek

Luigi Cossellu reportedly arrived at the hospital already in serious condition, something an official blamed on people's denial of the existence of COVID.
PUBLIC HEALTH・17 HOURS AGO
NBC News

A Pennsylvania woman rescued a ‘scared’ animal. No one knows what it is

A woman in Pennsylvania has experts flummoxed by the animal she discovered outside of her home. Christina Eyth rescued the animal earlier this week near her home in Fairfield Township after finding paw prints outside of her door. Eyth followed the tracks, assuming they had belonged to her neighbor's dog after they had gotten loose. The tracks ended up leading her to directly an unidentified animal, which Eyth said was exhibiting "scared behavior."
PENNSYLVANIA STATE・2 DAYS AGO