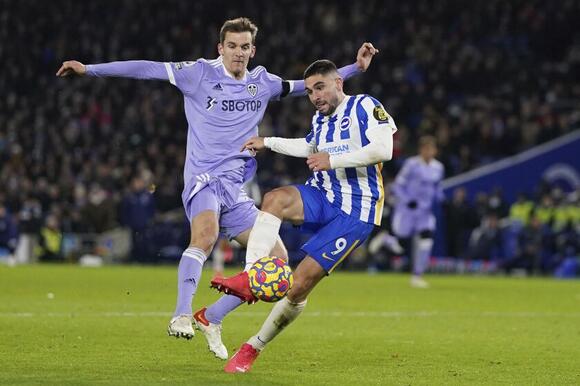 Tariq Lamptey kept setting up chances for Brighton. His teammates kept missing them.

Neal Maupay was the biggest culprit in the 0-0 draw at home to Leeds in the English Premier League on Saturday.

Lamptey is back fit after nine months out injured and the former Chelsea right back was a constant danger with his pace and delivery, creating five opportunities in the first half alone at Amex Stadium.

Maupay squandered two of them, shooting over from inside the six-yard box with the goal at his mercy and then volleying wide at the near post. The French striker was starting after three straight games on the bench but trudged off after being substituted in the 68th.

Substitute Solly March struck the post in the 89th for Brighton, too.

Leeds stayed in 17th, one place above the relegation zone, while Brighton was eighth and hasn't won any of its last eight league games.

Shannon O'Brien's second-half winner lifted Leicester Women off the bottom of the Women's Super League table after beating Brighton Women 1-0 at the King Power Stadium. The Foxes had won just one WSL game this season heading into the match but responded well against their out-of-form visitors. The opening 23...
SPORTS・1 DAY AGO
BBC

Leicester manager Lydia Bedford said her side's bright start against Brighton was a "statement of intent", with the Foxes securing a 1-0 win that lifted them off the bottom of the WSL table. Shannon O'Brien scored the only goal in the second half at the King Power Stadium. The Foxes...
SOCCER・1 DAY AGO
The Guardian

Minute-by-minute report: Kevin De Bruyne’s sumptuous second-half strike sealed a huge win for the champions as they look to retain their title. Scott Murray was watching.
PREMIER LEAGUE・2 DAYS AGO

Wolves survived a late Southampton fightback to maintain their European push.Raul Jimenez’s penalty, Conor Coady’s first Molineux goal for six years and Adama Traore’s injury-time effort earned a 3-1 win.James Ward-Prowse’s stunning free-kick pulled a goal back for the Saints and Romain Perraud hit the bar just before Traore sealed victory for the hosts.Bruno Lage’s side were not at their vibrant best but it was enough to squeeze past the Saints to sit eighth in the Premier League.They are just two points adrift of the top six while mid-table Southampton slipped to a seventh defeat of the season.There was little...
PREMIER LEAGUE・2 DAYS AGO
San Diego Union-Tribune

Brighton boss Graham Potter insists he is very happy at one of the Premier League’s “best-run clubs” amid reports linking him with the vacant Everton job.The Toffees are searching for a new manager after sacking Rafael Benitez following just one win from 13 top-flight games.Potter, whose contract runs until the summer of 2025, has impressed since arriving at the Amex Stadium in 2019 and has the Seagulls flying high in ninth place ahead of Tuesday’s visit of Chelsea.“I can’t comment on speculation, things that are out there in the newspapers,” he said.“I’m focused on my job here, very happy here...
PREMIER LEAGUE・14 HOURS AGO

AFC Wimbledon and Morecambe drew 0-0 in a tight Sky Bet League One relegation battle at Plough Lane. Ayoub Assal came closest to breaking the deadlock but hit the bar late on in the Dons' first home game for 42 days. Dons goalkeeper Nik Tzanev survived an early scare when...
SOCCER・2 DAYS AGO
The Independent

The Etihad Stadium plays host to the top of the table Premier League clash between Manchester City and Chelsea this afternoon. City are first in the league with Chelsea second coming into this game, but with completely different form in the competition. Chelsea will be hoping to end their poor run, but they will take inspiration from some promising displays in the Carabao Cup. Today’s match is Chelsea’s second against City in the league this season and their last chance to peg the reigning champions back in their pursuit of the title.Follow Man City vs Chelsea LIVECity will be...
PREMIER LEAGUE・2 DAYS AGO
Shropshire Star

Shrewsbury and Crewe shared the spoils in a competitive goalless draw watched on by a rampant Town following of almost 1,500 supporters at Gresty Road. A fourth League One clean sheet on the spin was enough for Steve Cotterill's men to claim a point in a clash not short on incidents on goal but lacking in a killer touch.
SOCCER・2 DAYS AGO
San Diego Union-Tribune

Aston Villa are hoping to gain revenge against Manchester United in the Premier League this afternoon. Steven Gerrard’s side suffered a 1-0 defeat at Old Trafford when the two sides met in the FA Cup third round just a few days ago after Scott McTominay struck the game’s only goal inside eight minutes. Villa could give debuts to both Lucas Digne and Philippe Coutinho for this fixture, though, as they look to surge up the table from a disappointing 14th. Follow Aston Villa vs Manchester United LIVEUnited’s momentum will have been raised slightly by victory but they still remained six...
PREMIER LEAGUE・2 DAYS AGO
The Independent

Manchester United denied Birmingham City two wins on the bounce as they claimed a dominant 5-0 win in the Women’s Super League on Saturday. Birmingham came into the match off the back of a huge upset over league leaders Arsenal, but United made sure they didn’t have the same fate and came out firing.Marc Skinner’s side were 3-0 up after 20 minutes thanks to goals from captain Katie Zelem and Leah Galton, before the afternoon went from bad to worse for the visitors as Emily Ramsey hit in an own goal and Alessia Russo added a fifth with a strike...
SOCCER・2 DAYS AGO
LFCTransferRoom

It was a comfortable afternoon for Liverpool at Anfield on Sunday as they ran out 3-0 winners against Brentford in the Premier League and you can watch the match highlights here. Despite controlling the first half, it took 44 minutes to break the deadlock when the excellent Fabinho headed home...
PREMIER LEAGUE・1 DAY AGO
The Independent

Steven Gerrard wants to keep Philippe Coutinho smiling after the Aston Villa debutant secured a hard-fought 2-2 draw that left Manchester United interim boss Ralf Rangnick deflated.Saturday evening’s Premier League encounter looked to be going the same way as their FA Cup tie at the start of the week, with Villa looking sharp but ultimately lacking a cutting edge against the Red Devils.A howler from Emiliano Martinez allowed Bruno Fernandes to open the scoring, with the Portuguese skipper adding another just as Villa threatened to level.Gerrard turned to former Liverpool team-mate Coutinho and got a dream response, with the Brazilian...
PREMIER LEAGUE・2 DAYS AGO