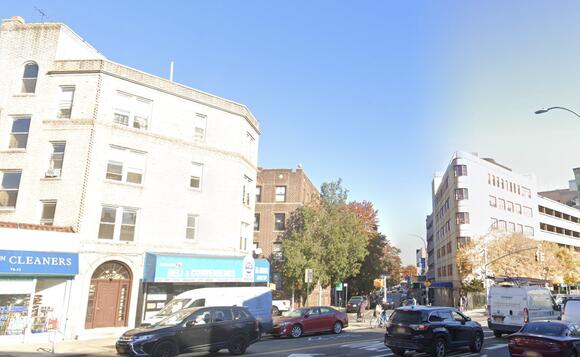 NEW YORK (1010 WINS) -- Police are seeking out three men allegedly responsible for stabbing a teen in the face in Queens.

Police said the 14-year-old boy was attacked on Broadway and 41st Avenue in Elmhurst around 7 p.m. Friday.

The teen went to a nearby hospital and was listed in stable condition, police said.

The motive behind the attack was unclear, and the suspect remained at large as of Saturday.

Information about the suspects is not currently known.

The NYPD released a new photo on Thursday of a suspect wanted in connection with the shooting of an 18-year-old man who was targeted aboard a subway train in the Bronx last week.
BRONX, NY・22 HOURS AGO
1010WINS

Police launched an investigation after a livery cab driver was robbed and stabbed by passengers Thursday night in the Bronx following a dispute over payment, authorities said.
NEW YORK CITY, NY・10 HOURS AGO
1010WINS

3 sought in fatal shooting of man in Manhattan apartment lobby

Police are searching for three men seen walking leaving the scene of a fatal shooting at an upper Manhattan apartment building this week.
NEW YORK CITY, NY・9 HOURS AGO
1010WINS

The NYPD is looking to identify two suspects wanted for an armed robbery that occurred at a Brooklyn store last month, authorities said.
BROOKLYN, NY・9 HOURS AGO

Person shot by police during confrontation in the Bronx: NYPD

A suspect was shot by police during a confrontation in the Bronx on Thursday afternoon, officials said.
NEW YORK CITY, NY・1 DAY AGO
1010WINS

A baby was shot at least once in the Bronx on Wednesday night, the NYPD said.
NEW YORK CITY, NY・1 DAY AGO
1010WINS

The NYPD released surveillance video Friday of the suspect selling some of the loot at a bodega shortly after the Jan. 9 robbery in Bushwick.
BROOKLYN, NY・10 HOURS AGO
1010WINS

An NYPD detective was shot and injured as police served a drug-related warrant at a Staten Island home on Thursday morning—the third NYPD member shot this month.
STATEN ISLAND, NY・1 DAY AGO
1010WINS

The NYPD released video Thursday of a suspect and a vehicle they’re searching for a day after an 11-month-old girl was shot in the face by a stray bullet in the Bronx.
NEW YORK CITY, NY・1 DAY AGO
1010WINS

Shocking video released by the NYPD Thursday morning shows two thieves knock a man unconscious on a Queens sidewalk before rifling through his belongings.
QUEENS, NY・1 DAY AGO
1010WINS

An e-bike rider is in critical condition after being struck by a hit-and-run driver at 10th Avenue and 18th Street in Brooklyn early Friday morning.
BROOKLYN, NY・2 HOURS AGO

Police arrested a 68-year-old unlicensed driver after he struck an 11-year-old boy in Queens on Thursday, leaving him in critical condition, authorities said.
QUEENS, NY・6 HOURS AGO
1010WINS

A man was fatally struck by a subway train at a Greenwich Village station on Friday morning, police said. The man, who was in his 50s, was on the tracks at the West 4th Street-Washington Square station when he was struck at 5:30 a.m.
NEW YORK CITY, NY・9 HOURS AGO
1010WINS

Video released by the NYPD on Wednesday shows the victim being shoved to the sidewalk at E. 86th Street and Henderson Place around 12:30 a.m. on Dec. 25.
NEW YORK CITY, NY・2 DAYS AGO
1010WINS

Authorities are searching for two thieves who posed as good Samaritans before tasing and robbing a victim of his car keys in Brooklyn early Tuesday morning.
BROOKLYN, NY・1 DAY AGO
1010WINS

Officials on Friday released surveillance footage of a man they are looking to locate and identify in connection to a burglary that occurred at a Hell’s Kitchen supermarket earlier this month, authorities said.
NEW YORK CITY, NY・3 HOURS AGO
1010WINS

A woman was placed into a chokehold before having her purse stolen while entering a subway station in Queens last week, according to police.
QUEENS, NY・2 DAYS AGO
1010WINS

Boy, 11, critical after being struck by vehicle in Queens; driver had suspended license: NYPD

Police said the incident happened around 3:30 p.m. at Rockaway and Lefferts boulevards in South Ozone Park. The driver is in police custody.
QUEENS, NY・21 HOURS AGO
1010WINS

Authorities are searching for a mugger who they said attacked a man in the vestibule of his Manhattan apartment building in the afternoon on New Year’s Eve.
MANHATTAN, NY・2 DAYS AGO