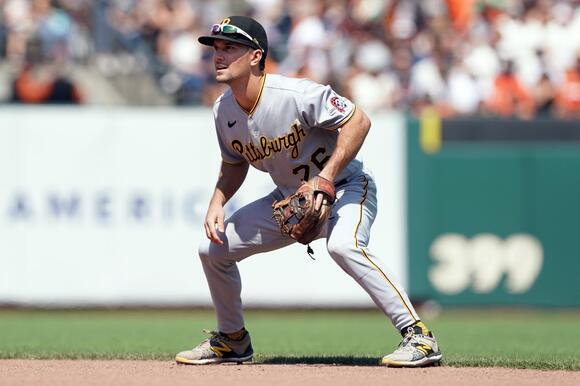 Another former Pittsburgh Pirates All-Star is on the move as MLB free agency heats up.

This transaction was not a free agent signing, however, but a trade.

Former Pirates infielder Adam Frazier, who was traded from Pittsburgh to the San Diego Padres this past season, is on the move again.

The Padres have sent Frazier to the Seattle Mariners.

On the way to San Diego is relief pitcher Ray Kerr and outfielder Corey Rosier.

The transaction was first reported by Jeff Passan.

According to Passan, Frazier will play for Seattle in a “superutility” role as the Mariners could be looking to land a high priced infielder.

Frazier played in 155 games in 2021 and only recorded five errors while mostly playing second base.

Occasionally he would spot in the outfield, but he made the National League All-Star team as a second baseman.

The Pittsburgh Pirates have six players on Baseball America’s latest top 100 list, further proof that general manager Ben Cherington is doing the best he can to make Pittsburgh farm system one of the strongest in the nation.
MLB・2 DAYS AGO
Inside The Phillies

With All-Star Shortstop Carlos Correa in the midst of free agency, why would he change his representation?
MLB・2 DAYS AGO
San Diego Union-Tribune

A fan favorite in Philadelphia since 1989, today we dive into the career of John Kruk.
MLB・2 DAYS AGO

The Yankees landed three prospects in the Baseball America Top 100 on Wednesday, and also got three in Baseball Prospectus Top 101 released Thursday - but Jasson Dominguez, who was No. 87 in the BA rankings, was left out by BP.
MLB・1 DAY AGO
Larry Brown Sports

Nets to part ways with one of their former All-Stars

One Brooklyn Nets player will continue his quest for his first NBA championship on a different team. The Athletic’s Shams Charania reported Thursday that the Nets and forward Paul Millsap have agreed to find Millsap a new NBA team where he will be able to have a larger contribution.
NBA・1 DAY AGO
Inside The Dodgers

One strike and he's in? David Ortiz likely to earn Hall of Fame induction despite PED connection

ESPN's Alden Gonzalez doesn't think that the Dodgers would be willing to sign Freeman to a long-term deal.
MLB・17 HOURS AGO
Sports Illustrated

The future of professional baseball in Tampa is uncertain.
MLB・1 DAY AGO
WFLA

ST. PETERSBURG, Fla. (WFLA) – Rays ownership tried pitching the sister city plan with Montreal as a way to improve revenues, increase player payroll and keep the team in Tampa Bay long term. But Major League Baseball has called a third strike on the proposal that didn’t sit well with many Rays fans. “If it […]
MLB・1 DAY AGO
Inside The Dodgers

The Dodgers have one of the longest and richest histories of getting players and turning them into big-league names. They've also shown an uncanny knack for being able to pluck guys from the international market and turn them into superstars. So when they announced their recent list of over 30 ...
MLB・1 DAY AGO

Major League Baseball rejected the Tampa Bay Rays’ proposal to split their seasons between Florida and Montreal. Commissioner Rob Manfred
MLB・1 DAY AGO
Inside The Dodgers

LA's lefty reliever is pitching to high schoolers to keep his arm loose and ready for the 2022 season amid the MLB lockout.
MLB・1 DAY AGO
Inside The Phillies

One of the first black superstars in Philadelphia Phillies history, today we remember the legendary career of Dick Allen.
MLB・19 HOURS AGO
Sports Illustrated

We asked our writers to advocate for one player on this year’s ballot to get elected to Cooperstown.
MLB・1 DAY AGO
USA TODAY

The Tampa Bay Rays will not be playing half their home games in Montreal anytime soon, but where the team will play in 2028 remains an open question.
MLB・1 DAY AGO
Inside The Phillies

Inside the Phillies fielded mailbag questions while the MLB lockout is in full force.
MLB・22 HOURS AGO
Inside The Dodgers

Report: Union plans to present counter to MLB on Monday

The MLBPA will present its counteroffer to Major League Baseball when the sides resume talks on Monday, ESPN reported Thursday.
MLB・1 DAY AGO