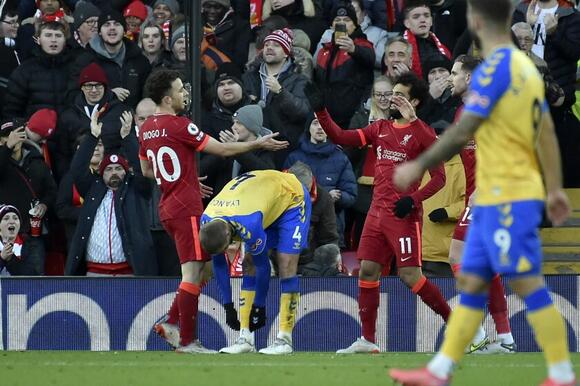 Liverpool turned up the pressure on English Premier League leader Chelsea by coasting to a second successive 4-0 victory at Anfield, with Southampton the overpowered team this time.

Southampton was dispatched on Saturday as comfortably as Arsenal was a week ago as Jurgen Klopp’s side moved within a point of Chelsea, in the process becoming the first top-flight team to score two or more goals for 17 straight matches in all competitions since Sunderland in 1927.

Liverpool has scored 39 times in 13 matches and no player has more Premier League goals individually this season than any of the starting front three — Mohamed Salah (11), Sadio Mane and Diogo Jota (both seven).

Jota added a couple to his tally from a combined distance of seven yards, midfielder Thiago Alcantara made it two in two games shortly before halftime off a deflected strike, and Virgil van Dijk killed off any fanciful hopes of a Southampton comeback just after the break.

It was the perfect preparation heading into a midweek Merseyside derby against Everton at Goodison Park, which marks a reunion with former Liverpool manager Rafael Benitez.

The trend for Southampton, however, remains a downward one after last week’s loss at Norwich.

Only three league wins all season leaves the team five points above the bottom three.

Southampton had not won at Anfield since 2013 or scored on its last five visits so the omens were not good, but conceding the fastest goal of the Premier League season — after just 97 seconds — was the worst possible start.

The returning Andy Robertson, who was one of six changes from the midweek Champions League win over Porto, resumed his marauding left back role after not starting the last two matches because of injury.

He combined with Mane down the left to get to the byline and pull back a cross for Jota to score from close range.

Mane’s header from Robertson’s free kick was ruled out for offside while Salah curled a shot wide of the far post after robbing Mohammed Salisu on the edge of the area.

After Jordan Henderson ballooned over a good chance, Jota doubled his tally in the 32nd minute with the 700th goal of Klopp’s tenure after Southampton was cut open down its right side this time.

Thiago’s ambitious cross-field pass was recovered by Trent Alexander-Arnold, who fed Salah. He collected a clever return pass from Henderson and slid a low cross which Jota could not miss.

The Portugal international was denied a first half hat trick by a block from Lyanco but the Southampton defender could only deflect in the ball when Thiago blasted a shot from just inside the area moments later after a delicious drop of the shoulder opened up the space.

But for all its superiority in the final third, Klopp’s side was still leaving the back door open, and had the visitors been sharper they would have had something to show for their first-half efforts.

Armando Broja was denied by Alisson Becker after nipping in front of, and outpacing, Ibrahima Konate while Liverpool’s goalkeeper saved well down to his right to deny the unmarked Adam Armstrong, who looked certain to score.

Mane’s visible annoyance when Salah failed to find neither him nor Jota in a three-on-two break indicated there would be no letting up. And shortly after halftime, the fourth goal duly arrived courtesy of a low volley by Van Dijk from Alexander-Arnold’s right-wing corner.

Konate’s sliding block and recovery to deny Armstrong, together with Alisson, from a Saints counterattack preserved a third successive clean sheet.

It was inevitable that Everton would sack Rafa Benitez. In theory he was a good appointment. The reality was different. The 61-year-old has the sort of obsessive nature and organisational talents needed to untangle a club in a mess. Just not this club.Almost no one wanted him. Not the owner, not the board, not the fans. Alisher Usmanov, the main sponsor and business associate of Farhad Moshiri, was the Spaniard’s biggest advocate. Moshiri, the man with his name over Goodison’s front door, was always dubious.Benitez had committed just about the worst crime in the eyes of the Gwladys Street. He...
SOCCER・2 DAYS AGO
The Independent

Arsenal are optimistic their Carabao Cup semi-final second leg against Liverpool will go ahead as planned on Thursday night.The Gunners successfully appealed to the Premier League to have Sunday’s north London derby away to Tottenham called off in the absence of a number of players.Injuries, suspension, coronavirus cases and losing players to the Africa Cup of Nations saw Mikel Arteta’s ranks depleted enough for the league to postpone their scheduled fixture.However, the PA news agency understands there have been no additional Covid-19 cases in the past two days and a couple of players are now likely to be fit following...
PREMIER LEAGUE・1 DAY AGO
Tribal Football

Diogo Jota doesn't care where he has to play for Liverpool. The Portuguese has been utilised in both central and wide attacking roles this season, resulting in 12 goals from 26 appearances. "I always try to do what the manager asks me to do," said Jota. "At Wolves we sometimes...
PREMIER LEAGUE・1 DAY AGO
Tribal Football

Diogo Jota is confident Liverpool are not out of the Premier League title race. The Reds are 11 points behind Manchester City and possess a game in hand. "At the moment City are already with a proper gap, let's say it like that, so it's up to us to try to close that gap," the Portugal international told the official matchday programme.
PREMIER LEAGUE・1 DAY AGO

Follow live updates from the Fifa Best Awards as the as the men’s and women’s player of the year are crowned in Zurich. Lionel Messi, Mohamed Salah and Robert Lewandowski are up for the men’s award, which is being handed out one month on from the Ballon d’Or. Messi was the winner on that occasion, beating Lewandowski to the prize, after a 2021 which saw the Argentina star claim a first major international honour with his country at the Copa America. He also won the Copa del Rey and finished as La Liga’s top scorer with Barcelona on his last...
PREMIER LEAGUE・2 DAYS AGO
AFP

Rafael Benitez was sacked as Everton manager on Sunday after just 200 days in charge of the struggling Premier League club with former player Wayne Rooney tipped as favourite to take over. Former Everton forward Rooney, currently impressing as manager of second tier Derby, is the bookmakers' favourite to replace Benitez.
PREMIER LEAGUE・2 DAYS AGO
The Independent

Liverpool manager Jurgen Klopp hopes the fact this season is far from normal will give his side a chance of reeling in Premier League defending champions Manchester City at the top of table.A comfortable 3-0 victory over Brentford secured a first league win since mid-December and closed the gap to 11 points with a match in hand.Klopp concedes in any other year that sort of lead would be unassailable but in a campaign being stretched by Covid-19, injuries and match postponements, he believes there remains a glimmer of optimism.“We don’t have to convince anyone outside to believe. If they want...
PREMIER LEAGUE・2 DAYS AGO
The Independent

Cristiano Ronaldo is expected to be available for Manchester United's trip to Brentford though will have to come through Tuesday's training sesssion at Carrington, Ralf Rangnick has said.Ronaldo and Marcus Rashford were left out of United's match day squad for Saturday's 2-2 draw at Aston Villa, missing their second consecutive game despite Rangnick expecting both to return.The United interim manager said both players were ruled out of making the trip to Villa Park after Friday's late training session but says both are currently in contention to play Brentford."Cristiano and Marcus were training yesterday so I suppose they will be training...
PREMIER LEAGUE・1 DAY AGO

Ralf Rangnick has no concerns about selecting Paul Pogba during the final months of his Manchester United contract, even if the midfielder’s only motivation to play well is to earn a deal at another club.Pogba has entered the final six month of his current Old Trafford terms, with little progress made in discussions over a renewal and a departure on a free transfer in the summer considered likely.The 28-year-old is yet to make an appearance under interim manager Rangnick after suffering a thigh injury while on international duty in November, though returned to full training on Monday.Rangnick expects Pogba...
PREMIER LEAGUE・19 HOURS AGO
AFP

Derby manager Wayne Rooney is in contention for an emotional return to Everton after the former England star's impressive handling of affairs on the pitch despite a financial crisis at the Championship club. Rooney is among the bookmakers' favourites to take permanent charge at Goodison Park after Rafael Benitez was sacked on Sunday. The 36-year-old made his name at Everton as a precocious teenager before rejoining his boyhood club following a glittering spell at Manchester United. And, in his short time as a manager, Rooney has offered evidence that the potential return of the prodigal son would be more than just an olive branch to Everton supporters infuriated by the dismal reign of the despised Benitez.
PREMIER LEAGUE・16 HOURS AGO

Tottenham head coach Antonio Conte rounded on the Premier League for their handling of postponed fixtures.Conte described the league’s decision to accept Arsenal’s request to call off Sunday’s north London derby as “strange and surprising” as the Gunners only had one confirmed Covid-19 case, with most of their absentees due to injury and international duty at the Africa Cup of Nations.The Italian said the league should consider changing their schedule if they are going to start postponing games because of injuries.Conte said: “It was disappointing because we prepared the game to play against Arsenal and the decision to postpone the...
UEFA・1 DAY AGO
The Independent

Thomas Tuchel has admitted struggling to fathom the rescheduling of Chelsea’s Premier League trip to BrightonThe Blues travel to the Amex Stadium on Tuesday, with the clash shifted from February 8 – when Chelsea will be at the Club World Cup in Abu Dhabi.But now boss Tuchel has been left wondering why the rearranged Brighton match could not have been staged a day later on Wednesday, January 19.Chelsea lost 1-0 at Manchester City on Saturday, with Brighton drawing 1-1 with Crystal Palace on Friday night.The Blues host Tottenham on Sunday and Brighton travel to Leicester, leaving Tuchel nonplussed as...
PREMIER LEAGUE・2 DAYS AGO
San Diego Union-Tribune