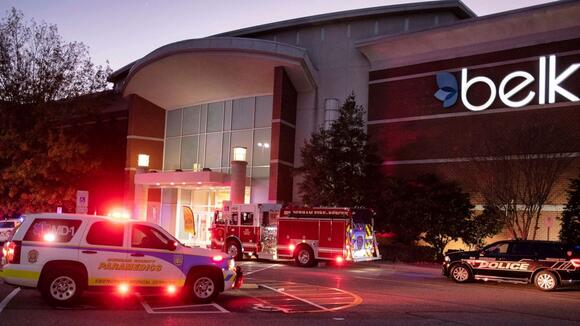 Several mall shootings and flash mob robbery sprees cast a pall on Black Friday, one of the busiest shopping days of the year.

Three people were shot, including a 10-year-old, and another three suffered non-life-threatening injuries during the subsequent evacuation when gunfire broke out at Southpoint Mall in Durham, North Carolina, Friday afternoon, police said.

The child and another male shooting victim sustained non-life-threatening injuries, while a man was in critical condition due to gunshot wounds as of Saturday afternoon, police said.

One person was in custody, while others involved in the shooting fled the scene in what did not appear to be a random incident, according to the Durham Police Department. No charges had been filed as of Saturday afternoon.

"There were people being trampled, going up and down the escalator," Aleaha Marr, who was shopping with a friend at the time of the shooting, told ABC Raleigh station WTVD .

One person suffered a gunshot wound after a shooting at Tacoma Mall in Washington Friday evening, authorities said.

The condition of the shooting victim was unknown at the time. Nobody was in custody, and there were no leads on suspects in the hours immediately after the shooting, police said.

Shoppers recounted the panic after gunfire broke out.

"We were about to get up and I hear about six shots or something," Daisey Dockter, who was finishing a meal at the food court at the time of the shooting, told ABC Seattle affiliate KOMO . "We all just start running toward the door. It's a huge mob of people. Everyone's kind of pushing."

The mall was evacuated and secured following the incident. Several stores started going on lockdown and served as places for people to hide, KOMO reported.

"Our doors were locked," Peyton Comstock, who works at BJ's Restaurant and Brewhouse, told the station. "Nobody could come in. We took in people obviously that were scared. There was a poor mom and daughter. She was so terrified. I felt so bad. [She was] hyperventilating."

The alert followed a robbery at the Bottega Veneta store in the Melrose area, where an unknown amount of items were reportedly taken by a large group of people, according to ABC Los Angeles station KABC .

In Lakewood, a group of about eight people stole tools from a Home Depot just before 8 p.m. local time Friday, according to the L.A. County Sheriff's Department. The items, which included hammers, sledgehammers and crowbars, amounted to around $400, authorities said.

The incidents follow reports of smash-and-grab thefts that occurred earlier this week at the Beverly Center and Topanga Mall.

The LAPD stepped up patrols in major shopping districts with the help of California Highway Patrol units in the wake of the robberies, Chief Michel Moore told KABC Wednesday.

"We know that when police officers are visible, when they're in our neighborhoods, that we have safer neighborhoods, we have better interactions and we just overall are just a more safer city," Moore told the station.

Another flash mob theft occurred in Minnesota Friday night, when a group of as many as 30 swarmed a Best Buy in south metro Minneapolis, authorities said.

The incident occurred after 8 p.m. local time, when the group allegedly stole electronics and fled before police arrived, the Burnsville Police Department said.

So far, no arrests have been made, and it's unclear how much merchandise was stolen, police said.

It’s shopping time. In California they can get anything under $950 for free. That’s right if you live close to California it’s shopping time. Go steal everything you want valued under $950. Take your reward home and get back out there. Go to apple and get you a new $900 phone and just walk out the door. Then go to cvs and get high on your deserved drug of choice before heading to Best Buy for a $920 free television. If you’re in Oregon or Nevada or Arizona it’s time to head for California. The home of everything under $950 is free. So hurry before all the stores close.

This is sooo sad that some people do something like this but yet it doesn't surprise me at all everyday someone is getting shoot and killed everywhere they don't care where in the street,a home,in a mall,church ,schools, people just don't care about human life no one is safe and it's going to get worse especially around the holidays !I don't even feel safe going to get groceries or shopping at Wal-Mart for my necessity so I just stay home and keep myself in-doors!

The suspect died as an FBI team breached the temple.
COLLEYVILLE, TX・45 MINUTES AGO
The Associated Press

SEOUL, South Korea (AP) — North Korea on Monday fired two suspected ballistic missiles into the sea in its fourth weapons launch this month, South Korea’s military said, with the apparent goal of demonstrating its military might amid paused diplomacy with the United States and pandemic border closures.
MILITARY・1 HOUR AGO
Reuters

U.S. CDC urges Americans to wear 'most protective mask you can'

WASHINGTON, Jan 14 (Reuters) - The U.S. Centers for Disease Control and Prevention (CDC) on Friday revised its guidance for Americans on wearing masks to protect against COVID-19, recommending donning "the most protective mask you can" while stopping short of advocating nationwide usage of N95 respirators. The CDC, an agency...
U.S. POLITICS・2 DAYS AGO
FOXBusiness

The woman identified by police as the victim who was pushed to her death in front of a subway train at the Times Square station Saturday was a senior manager at Deloitte Consulting, according to a LinkedIn page bearing the same name and image of the victim. New York City...
NEW YORK CITY, NY・6 HOURS AGO

WASHINGTON (AP) — Charles McGee, a Tuskegee Airman who flew 409 fighter combat missions over three wars and later helped to bring attention to the Black pilots who had battled racism at home to fight for freedom abroad, died Sunday. He was 102. McGee died in his sleep at...
BETHESDA, MD・50 MINUTES AGO
CBS News

Factbox: How Americans can get free COVID-19 tests promised by Biden

Jan 14 (Reuters) - Americans will be able to order free COVID-19 tests online beginning Jan. 19, part of a plan by President Joe Biden to distribute 1 billion at-home rapid kits to fight the spread of the Omicron variant. Here's how the rollout will work. HOW TO ORDER. Starting...
PUBLIC HEALTH・2 DAYS AGO
The Associated Press

WASHINGTON (AP) — From the inaugural platform, President Joe Biden saw American sickness on two fronts — a disease of the national spirit and the one from the rampaging coronavirus — and he saw hope, because leaders always must see that. “End this uncivil war,” he implored...
PRESIDENTIAL ELECTION・16 HOURS AGO

Who is Aafia Siddiqui, the federal prisoner at the center of the Texas hostage situation?

Aafia Siddiqui, whose release has been demanded by a man who has taken hostages inside a Texas synagogue, would not condone the man's actions, her attorney said Saturday. The unidentified man, who took an unspecified number of people hostage inside Congregation Beth Israel in Colleyville, Texas, said he wants Siddiqui to be released from a Texas federal prison, where she is serving an 86-year sentence after being convicted of attempting to murder U.S. soldiers.
TEXAS STATE・1 DAY AGO
NBC News