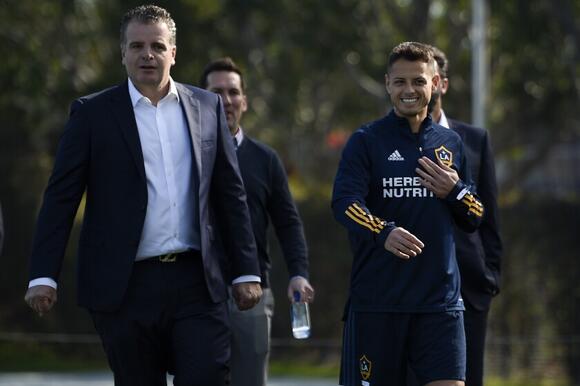 The Galaxy have lost another general manager, their fourth in six years, after Dennis te Kloese left to return to the Netherlands as CEO at Feyenoord of the Dutch Eredivisie.

The Galaxy reportedly picked up the option on Te Kloese’s contract hours before it was set to expire this fall, but Te Kloese elected not to stay, adding to an exodus that has seen the club use five managers and three general managers since Bruce Arena’s departure in 2016. The Galaxy made the playoffs just once in that span while extending to seven the club-record streak for seasons without an appearance in the MLS Cup final.

“I am truly grateful and feel very proud to have served the Galaxy for the last three years,” Te Kloese said in a statement released by the team. “I will take with me some great memories and I have experienced some unforgettable moments over the last years.”

With Te Kloese’s departure, coach Greg Vanney, who was the manager and technical director with his previous club in Toronto, is expected to handle player personnel decisions just as MLS is about to enter the busiest part of its offseason. Teams have until Tuesday to exercise contract options on players, then the league’s trade period begins Dec. 12, followed by end-of-year waivers, the expansion draft and free agency. The European transfer windows begin opening Jan. 1.

More than half of Te Kloese’s tenure with the Galaxy came during the pandemic, which hampered recruiting and signings while forcing the team to play many games with no fans or severely limited attendance. Despite that he helped remake the roster twice, first under Argentine coach Guillermo Barros Schelotto, and then last season under new coach Greg Vanney.

Te Kloese was instrumental in helping the team sign Javier “Chicharito” Hernández, whom he has known since the player’s youth days at Chivas, and Argentina World Cup player Cristian Pavón. He also orchestrated the complicated departure of designated player Gio dos Santos, clearing the way for the return of Zlatan Ibrahimovic for a second season.

He also signed defender Giancarlo González, who proved to be a multimillion-dollar mistake.

Te Kloese, 47, was born in the Netherlands and played for four teams as a defender before knee injuries forced him to retire at 25.

He’s worked in North America since 2003, serving in a variety of roles with Chivas and Chivas USA, with Tigres of Liga MX and with the Mexican federation before returning to MLS with the Galaxy in the winter of 2018.

Robert Lewandowski took home his second straight award, but one star competitor left him off the ballot completely.
UEFA・2 DAYS AGO
The Independent

The Spanish Super Cup crown has reinforced Real Madrid's status as the hottest side in Spain
SOCCER・2 DAYS AGO
lagalaxy.com

Tottenham head coach Antonio Conte rounded on the Premier League for their handling of postponed fixtures.Conte described the league’s decision to accept Arsenal’s request to call off Sunday’s north London derby as “strange and surprising” as the Gunners only had one confirmed Covid-19 case, with most of their absentees due to injury and international duty at the Africa Cup of Nations.The Italian said the league should consider changing their schedule if they are going to start postponing games because of injuries.Conte said: “It was disappointing because we prepared the game to play against Arsenal and the decision to postpone the...
UEFA・1 DAY AGO
The Guardian

Sporting Kansas City acquired German defender Robert Voloder. The 20-year-old center back arrives in a transfer from NK Maribor in
MLS・14 HOURS AGO

One of Chelsea’s international scouts has today announced that he has quit Chelsea to join local rivals Tottenham. Tika Musonda, who is the brother of Charly currently still playing at our club, has posted via his Linkedin account as you can see below. It would be amazing if you...
PREMIER LEAGUE・15 HOURS AGO
Sportsnaut

Newcastle United have seen their initial bid to sign Jesse Lingard on loan from Manchester United rejected.Lingard, whose contract is set to expire at the end of the season, is one of several players at Old Trafford eager to find regular first-team football elsewhere.Newcastle are keen to make Lingard the third signing since the Saudi Arabia-led takeover, following the arrivals of Kieran Trippier and Chris Wood.Ralf Rangnick, United's interim manager, has admitted that his squad is too big to give regular opportunities to all of his players but is wary of the need for depth during a Covid-affected season.A loan...
PREMIER LEAGUE・13 HOURS AGO
The Independent

Was this the attitude Cristiano Ronaldo demanded?Whatever about refusing to accept criticism, Manchester United’s new generation refused to accept anything other than victory.It was certainly the response, and the result, Ralf Rangnick and his team needed.On a night when they were often second best to Brentford, and mere days after Ronaldo gave such a pointed interview about the attitude of younger players, three of the club’s youth graduates scored to secure a crucial 3-1 win in the race for fourth. The table looks that bit better for United. The mood is that bit improved.That’s the spirit of youth, that feels...
PREMIER LEAGUE・8 HOURS AGO
San Diego Union-Tribune