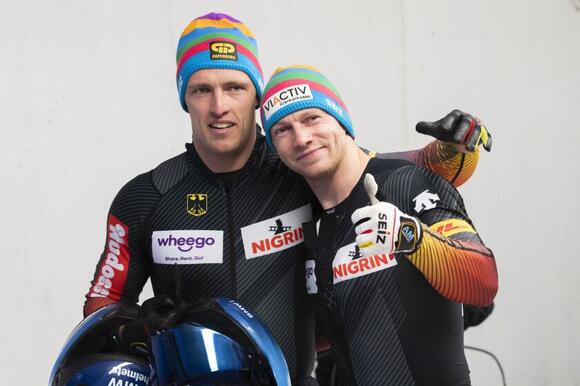 Germany’s Francesco Friedrich has extended his streak to 34 consecutive World Cup two-man races with a medal, guiding his sled to an easy win over countryman Johannes Lochner on Saturday.

Friedrich and brakeman Thorsten Margis finished two runs in 1 minute, 43.48 seconds. Lochner and Christian Rasp were second in 1:43.84, and the Canadian team of Justin Kripps and Cam Stones won bronze in 1:43.96.

Friedrich has won 27 golds and seven silvers during his two-man World Cup medal streak — not even including the Olympic two-man gold from the 2018 Pyeongchang Games that he shared with Kripps, and three two-man world titles in that span.

Codie Bascue and Carlo Valdes were 10th for the U.S., while Hunter Church and Hakeem Abdul-Saboor finished 20th.

The U.S. got two top-six finishes in women’s monobob, with Elana Meyers Taylor improving to 2-for-2 on the season with another victory. Germany’s Laura Nolte was second, and Breanna Walker of Australia was third.

Canada got fourth and fifth with Christine de Bruin and Cynthia Appiah, and reigning world champion Kaillie Humphries was sixth for the U.S.

The bobsled weekend concludes Sunday in Igls with women’s bobsled and four-man competitions.

For decades, ice dance was the stepchild of U.S. figure skating
SWIMMING & SURFING・14 HOURS AGO
Insider

For the first time since the 1998 Nagano Winter Olympics and decades since “Cool Runnings” became an instant classic, a Jamaican four-man bobsled team has once again qualified for the Winter Olympics.
SPORTS・1 DAY AGO
The Independent

Team USA s opening ceremony uniforms for the Beijing Olympics include some sneaky new warming technology, along with a handy front pouch and a cinch waist on anoraks in navy and white.The jackets unveiled Thursday by official outfitter Ralph Lauren include a smart, honeycomb-like fabric layer built in that expands or contracts in response to temperature changes — all without the use of a battery or wired technology.The assist by a company called Skyscrape follows battery-powered cooling and heating tech the company used for some previous looks for the Tokyo Summer Olympics and the Pyeongchang Winter Games.Bobsledder Aja Evans...
SPORTS・16 HOURS AGO

Abby Roque Is Poised to Make History in Beijing, in More Ways Than One

With several Team USA fixtures now retired, the center will lead a new generation's quest for glory while breaking new ground in her sport as an Indigenous player.
SPORTS・2 DAYS AGO
San Diego Union-Tribune

Kaitlin Hawayek spent time over the summer dealing with a concussion received in training, unsure of when she would be able to skate again
SPORTS・1 DAY AGO
TIME

Four years after becoming a breakout star, the snowboarding prodigy is bringing her full self to the Beijing Olympics
CELEBRITIES・1 DAY AGO
Sportsnaut

Danka Kovinic will take her No. 98 world ranking into the third round of the Australian Open after defeating Britain’s
SPORTS・14 HOURS AGO

Jamaican 4-Man Bobsledding Is Back: The Olympic Drought Is No More

The ice is about to get hotter than a beef patty because the Jamaican bobsleigh team is back. For the first time ever, Jamaica has qualified for three-bobsled events in the 2022 Beijing Winter Olympics. Jamaica will be representing the men’s two-man and four-man, along with the woman’s monobob. The men’s four man team will […]
SPORTS・1 DAY AGO
teamusa.org

Capacity held to 12,000 for US World Cup qualifier at Canada

The crowd for Canada's World Cup qualifier against the United States on Jan. 30 will be limited to 12,000 at Tim Hortons Field in Hamilton, Ontario, half of capacity
SOCCER・6 HOURS AGO
Deadline

Covid-19 concerns have led NBC Sports to keep most of its announcing teams at home for the upcoming Beijing Winter Olympics, according to a report. “The announce teams for these Olympics, including figure skating, will be calling events from our Stamford (Conn.) facility due to COVID concerns,” Greg Hughes, senior vice president communications, NBC Sports, said in a phone interview with USA Today. “We’ll still have a large presence on the ground in Beijing, and our coverage of everything will be first rate as usual, but our plans are evolving by the day as they are for most media companies covering the Olympics,” he added. NBC’s broadcasting teams for figure skating, Alpine skiing and snowboarding were originally going to be at the games. The rest were already scheduled for Connecticut duties. NBC also kept most of its team at home for the Tokyo Summer Olympics, but did have teams on site in Japan for some sports, including gymnastics and swimming. The network’s Olympic host, Mike Tirico, will attend the Feb. 4 opening ceremony and the first few days of the Games in China. But he then be evacuated for Los Angeles to host the Feb. 13 Super Bowl, another NBC property this year.
STAMFORD, CT・1 DAY AGO

Mikaela Shiffrin Is Focused on the Process

After the sudden death of her father, and faced with the crushing weight of expectations, the dominant skier of her generation has recalibrated her idea of Olympic success heading into Beijing.
SPORTS・2 DAYS AGO
San Diego Union-Tribune

Laura Deas insists a Winter Olympics without any snow will not inhibit the spectacle for the adoring British public as she aims to extend Team GB’s line of skeleton golden girls.Welsh ace Deas, 33, bagged bronze in Pyeongchang four years ago and will represent Britain’s chief sliding hope when she takes to the Beijing track next month.But the Chinese capital will be anything but a salubrious alpine winter wonderland, with the Yanqing District – where the skeleton, luge and bobsleigh events will take place – receiving just 2cm of snow between January and March last year.That figure was less than...
WORLD・20 HOURS AGO

Laura Deas is confident she can put a disappointing World Cup season behind her and stretch Great Britain’s medal-winning streak in women’s skeleton to six Olympic Games in Beijing.The 33-year-old, who claimed a bronze medal behind the now-retired Lizzy Yarnold in Beijing, has struggled to repeat her Pyeongchang heroics with just three top finishes to her name.But Deas insists recent history must not rule out her chances of winning a second medal in the Chinese capital and continuing a run of podium finishes that started with Alex Coomber’s bronze medal in Salt Lake City in 2002.Deas said: “I’ve had a...
SPORTS・1 DAY AGO
San Diego Union-Tribune

Swimming Australia has released the findings of a report into alleged misogyny in the sport, saying the "open and frank" feedback from female participants was "difficult to read."
SPORTS・27 MINUTES AGO
Rolling Stone

The Beijing Winter Olympics are just around the corner, slated to begin on February 4th. In anticipation of the big day, we’re gearing up with some of the best winter Olympics merch to cheer on from home. If you’ve tuned into past Olympics, you’re probably aware that fashion plays a substantial role in the games. Clothing and footwear brands go all-out, outfitting athletes with the latest and greatest (and most stylish). Over the past nine years, one highlight has been the Ralph Lauren-designed Team USA opening and closing ceremony ensembles. Nike is also a key player, lending footwear and apparel to...
APPAREL・10 HOURS AGO