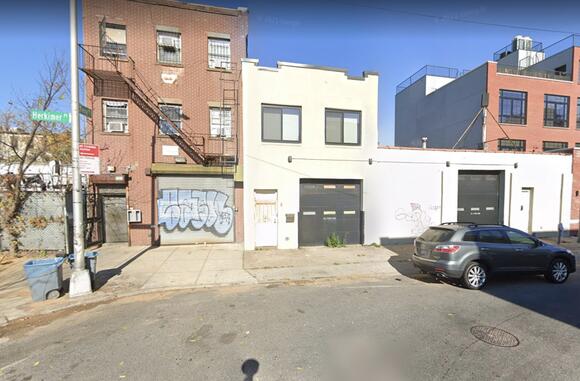 NEW YORK (1010 WINS) -- A dispute between three people in Brooklyn early Saturday ended with one woman dead and a man injured, police said.

On Saturday at 2:30 a.m., police responded to a 911 call for an assault at the intersection of Herkimer Place and Perry Place in Bed-Stuy.

A preliminary investigation showed the victims were involved in a dispute with another man, who stabbed both of them, police said.

EMS responded to the scene and transported both, but the woman was pronounced dead at NYC Health + Hospitals/Kings County.

The man was in stable condition, according to police.

Police said the suspect fled, and a knife was found the scene.

No arrests have been made, and the victim hasn’t been identified pending family notification.

A 13-year-old girl was critically injured after being hit by a box truck in Brooklyn on Thursday morning, police said. The girl was hit by the truck at the intersection of Coney Island Avenue and Avenue J in Midwood just after 7:30 a.m.
NEW YORK CITY, NY・22 HOURS AGO
1010WINS

A subway rider was hospitalized with multiple fractures after a man dragged him around a subway station in Brooklyn, police said Thursday as they released video of the suspect.
NEW YORK CITY, NY・23 HOURS AGO
1010WINS

Multiple vehicles parked near the Harlem precinct where two officers were killed during a shooting ambush had their tires slashed on Wednesday night, authorities said.
NEW YORK CITY, NY・20 HOURS AGO
1010WINS

The NYPD is searching for a man who they said forcibly touched a 14-year-old girl as she was sitting on a Queens subway train Wednesday morning.
19 HOURS AGO

A Bronx man who was wanted for a fatal shooting in a nightclub last May has been apprehended, police said.
NEW YORK CITY, NY・1 DAY AGO
1010WINS

Authorities in New Jersey are investigating a vicious attack on a 90-year-old woman who was beaten during an overnight home invasion, according to reports.
1 DAY AGO
1010WINS

Man, 25, crashes car on Bronx highway after being fatally shot

Officials are investigating a collision on a Bronx highway Tuesday night, where a man was found shot to death, according to authorities.
NEW YORK CITY, NY・1 DAY AGO
1010WINS

Cab driver stabbed in the Bronx after passengers refused to pay fare: NYPD

Police were only able to describe the three suspects as being between 20-30 years old, but also released photos and video of them running away after the incident.
1 DAY AGO

The NYPD is searching for a man who stole a woman’s cellphone as she waited on a Bronx subway platform last week.
BRONX, NY・1 DAY AGO
1010WINS

One person was shot in the waiting room of NYC Health + Hospitals/Jacobi on Tuesday afternoon following a dispute with two others, according to police.
BRONX, NY・2 DAYS AGO
1010WINS

Mora, who was mortally wounded in a shooting ambush at a Harlem apartment Friday, was kept on life support and transferred from Harlem Hospital to NYU Langone Medical Center over the weekend so that his organs could be donated.
1 DAY AGO

Woman stabbed at Harlem subway station, suspect on the loose

The 48-year-old victim was on a subway platform at the 125th Street station at Lenox Avenue around 9:15 p.m. when she and her attacker got into an argument, according to police.
NEW YORK CITY, NY・2 DAYS AGO
1010WINS

The NYPD is looking to identify a group of armed suspects wanted for repeatedly stabbing a Bronx convenience store employee during a robbery.
BRONX, NY・2 DAYS AGO
1010WINS

Police released a new video Monday night of the gunman sought in the shooting of an 11-month-old girl in the Bronx as the reward was increased to $10,000.
NEW YORK CITY, NY・2 DAYS AGO
1010WINS

BRONX MUGGING: Man who robbed victim at gunpoint, shot him sought by police

The NYPD released surveillance footage of a suspect who robbed a man at gunpoint as he walked into his Bronx building and shot him early on New Year’s Eve.
NEW YORK CITY, NY・2 DAYS AGO
1010WINS

A man robbed the same Jersey City deli three times in six days and was arrested on his fourth attempt.
2 DAYS AGO
1010WINS

According to cops, officers responded at around 6:37 a.m. to a 911 call about a pedestrian struck at the intersection of Third Avenue and East 76th Street.
UPPER EAST SIDE, NY・3 DAYS AGO
1010WINS

Officials charged a woman with murder after she allegedly stabbed her neighbor to death in Queens over the weekend, authorities said.
NEW YORK CITY, NY・3 DAYS AGO