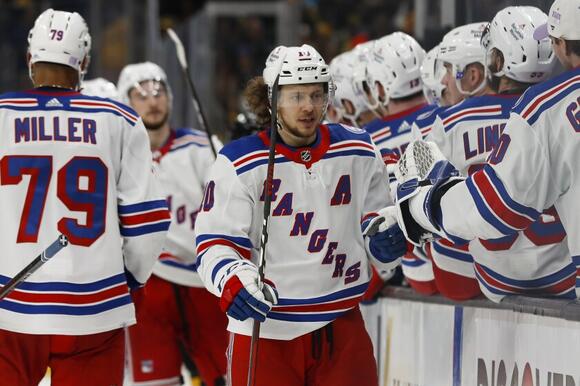 New York Rangers forward Artemi Panarin has been fined $5,000 for throwing one of his gloves at Boston Bruins winger Brad Marchand.

The NHL announced the punishment on Saturday. The fine is the maximum allowed under the league's collective bargaining agreement with the players' union.

Panarin and Marchand were standing in front of their respective benches when the glove-throwing episode occurred during the third period of New York's 5-2 victory at Boston on Friday. Panarin was assessed a misconduct penalty.

Panarin had a goal and an assist in the win against the Bruins. He has five goals and 16 assists in 20 games this season.

Henrik Lundqvist became the 11th player to have his number retired by the New York Rangers when a banner with his name and No. 30 was raised to the rafters at Madison Square Garden on Friday night
NHL・54 MINUTES AGO
Sportsnaut

you can’t beat them, join them! And by “join them” we mean take all of their players. On their current roster, the Washington Capitals carry four former Pittsburgh Penguins.
NHL・2 DAYS AGO
WFAN Sports Radio

With only eight games remaining between Thursday and the end of February, the Tampa Bay Lightning will look to get
NHL・2 DAYS AGO
CBS Boston

BOSTON (CBS) — Like the rest of Major League Baseball, the Red Sox are in a holding pattern as the league and the MLBPA try to end the current lockout. But when the lockout does end, the Red Sox may make a huge free agent splash. The Red Sox are the favorites to sign Japanese superstar Seiya Suzuki when MLB gets back up and running, according to a report from Yahoo Japan. There is a conflicting report by Nikkan Sports, however, that says that Suzuki has narrowed his list of teams down to three or four — the Mariners, Cubs, Giants...
MLB・2 DAYS AGO

The NHL took time to celebrate Flyers defenseman Keith Yandle after he broke the league’s ironman record at UBS Arena with his 965th straight game.
NHL・2 DAYS AGO
Sportsnaut

While the Edmonton Oilers always would prefer the security that comes from an early lead, falling behind will not deter
NHL・2 DAYS AGO
WGR550

Many of the Sens described the hit as a cheap shot and the NHL felt that Batherson was not eligible to be body checked. In addition, it was a high shoulder check that caused Batherson to fall dangerously and with force into the back wall.
NHL・2 DAYS AGO
iheart.com

Ronnie & TKras w/ Zac Blobner This Morning: The Bucs have a lot on their plate to deal with, despite being out of the NFL Playoffs after losing to the Rams last Sunday. From Tom Brady on Instagram saying "Thank You", to OC Byron Leftwich unofficially heading to Jacksonville to coach the Jags, to Antonio Brown going on HBO and threatening to sue the team... it's, A LOT. Bucs Radio Voice Dave Moore & Pewter Report's Jon Ledyard help us break it all down, oh AND Saints HC Sean Payton stepping away from New Orleans in there too. Plus, the Bolts back home vs the Devils tomorrow, as Bally Sports Lightning TV Voice Dave Randorf calls the show w/ a bone to pick about Jon Cooper getting shafted by the NHL. Zac handles What's Up Tampa Bay w/ Wacky Turtle News & a game of Would You Rather on the MLB Hall of Fame ONLY inducting Red Sox Legend David Ortiz while shelving Barry Bonds' chances for the final time...
NFL・2 DAYS AGO

Senators left wing Tyler Ennis scored his second career hat trick in Tuesday’s win over Buffalo (his former team), but only one hat was thrown onto the ice with no fans in attendance at the Canadian Tire Centre in Ottawa.
NHL・2 DAYS AGO
93.7 The Fan

At times during Tuesday’s 6-3 win over the Arizona Coyotes at PPG Paints Arena, fans may thought they were seeing the hockey equivalent of the Harlem Globetrotters making a laughingstock out of the Washington Generals.
NHL・2 DAYS AGO
Sportsnaut

Islanders game against Kraken postponed due to storm

In The Panthers We Trust

Jessica Blaylock talks about The Panthers winning ways and how their build and attitude all play a part plus what is Major League Baseball doing with The Hall of Fame.
NHL・2 DAYS AGO