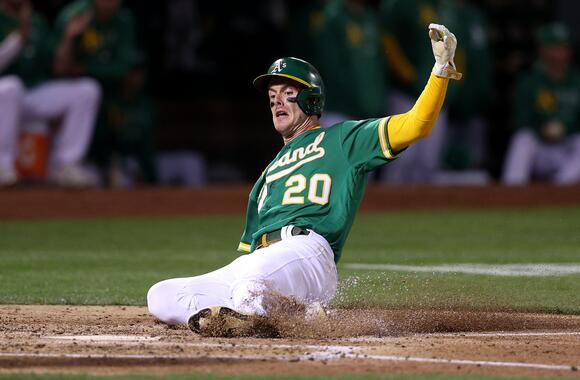 The New York Mets’ Black Friday shopping spree completely overhauled their outfield, starting with the signing of former Oakland Athletic Mark Canha to a two-year deal with an option for 2025, worth a guaranteed $26.5 million.

Defensively, Canha spent most of his time in left field, making 93 starts and 13 relief appearances there, but he also played 27 games in right and 20 in center, and made two late appearances at first base – the position he played most in his rookie season in 2015.

The signings of Canha, infielder Eduardo Escobar (129 wRC+), and reportedly center fielder Starling Marte (112 wRC+) will greatly improve the Mets’ lineup against lefties, and overhauls an outfield that looks likely to let Michael Conforto walk in free agency and had Dom Smith, a first baseman by trade, in left and Brandon Nimmo, likely more suited for a corner, in center.

The Mets also added Nick Plummer on a major-league deal and are reportedly interested in a Javier Baez reunion, which could push one or more of Jeff McNeil, J.D. Davis, or Robinson Cano into part-time duty or moving elsewhere, even if the DH comes to the National League.

The Yankees and Mets each have three entries on Baseball America’s Top 100 list, which was released on Wednesday morning with Anthony Volpe cracking the top 10.
MLB・2 DAYS AGO
WFAN Sports Radio

With All-Star Shortstop Carlos Correa in the midst of free agency, why would he change his representation?
MLB・1 DAY AGO
WEEI Sports Radio

The Boston Red Sox added to their pitching depth with the signing of former major league righthanded pitcher Taylor Cole to a minor-league deal with a invitation to big-league camp.
MLB・2 DAYS AGO

BOSTON (CBS) — Earlier this month, Dan Shaughnessy shared his Baseball Hall of Fame ballot — a ballot which included only Jeff Kent and notably did not include David Ortiz. While Shaughnessy’s obviously entitled to his opinion, so is Ortiz. And the Red Sox legend let his feelings be known on the writer’s decision to leave him off the ballot. “You know Dan Shaughnessy has been an a–hole to everybody, so what can I tell you?” Ortiz said on Merloni & Fauria on WEEI on Wednesday. “It’s not a surprise for me, it’s not a surprise for y’all. Now he didn’t vote for...
MLB・1 DAY AGO
Inside The Dodgers

Yefry Ramirez has been re-signed to a minor league contract by the Dodgers, according to reports. The right-hander pitched in the Los Angeles organization in 2021, making 22 starts and three relief appearances with Triple-A Oklahoma City. The 28-year old also made one relief appearance for the ...
MLB・2 DAYS AGO
Inside The Dodgers

Chicago White Sox catcher Yasmani Grandal normally would be in communication with his coaches this time of year while counting down to spring training. These, unfortunately, are not normal times for Major League Baseball. Owners instituted a lockout when the collective bargaining agreement with the players union expired in early December. Until it ends, players on the 40-man roster are not ...
MLB・2 DAYS AGO
Audacy

Carlos Correa announced on Tuesday that he was switching agents to Scott Boras and on Wednesday it was reiterated that he was looking for a minimum $330 million contract.
MLB・2 DAYS AGO
The Baltimore Sun

In less than a month, Orioles pitchers and catchers are scheduled to report to Sarasota, Florida, to mark the start of spring training. Yet, there remains uncertainty as to whether that will happen as planned with the league’s owners continuing to lock out the players as the two sides plod toward a new collective bargaining agreement. But as the lockout marches on, so too does Oriole of the ...
MLB・2 DAYS AGO
Inside The Phillies

Can Corey Knebel Be Elite for the Phillies in 2022?

One strike and he's in? David Ortiz likely to earn Hall of Fame induction despite PED connection

Ortiz, a three-time World Series champion with Boston, finished his career with 541 home runs.
MLB・1 DAY AGO
Inside The Phillies

A fan favorite in Philadelphia since 1989, today we dive into the career of John Kruk.
MLB・2 DAYS AGO
Inside The Phillies

RHP Mick Abel and SS Bryson Stott fall in at 51 and 67 on Baseball America's Top 100 Prospect List.
MLB・2 DAYS AGO
Inside The Phillies

Can Aaron Nola Finally Bounce Back in 2022?

Philadelphia Phillies pitcher Aaron Nola has the stuff to be elite. Can he have a bounce back season in 2022?
MLB・1 DAY AGO

With a loaded farm system, which ranks either No. 1 or No. 2 in Major League Baseball, depending on the publication, the Mariners’ approach toward this international signing period was a little different than in recent years. Instead of spreading their international bonus pool (dollars allotted for signing bonuses)...
MLB・2 DAYS AGO
Sports Illustrated

The future of professional baseball in Tampa is uncertain.
MLB・1 DAY AGO
Inside The Phillies

The Tampa Bay Rays will not be playing half their home games in Montreal anytime soon, but where the team will play in 2028 remains an open question.
MLB・1 DAY AGO